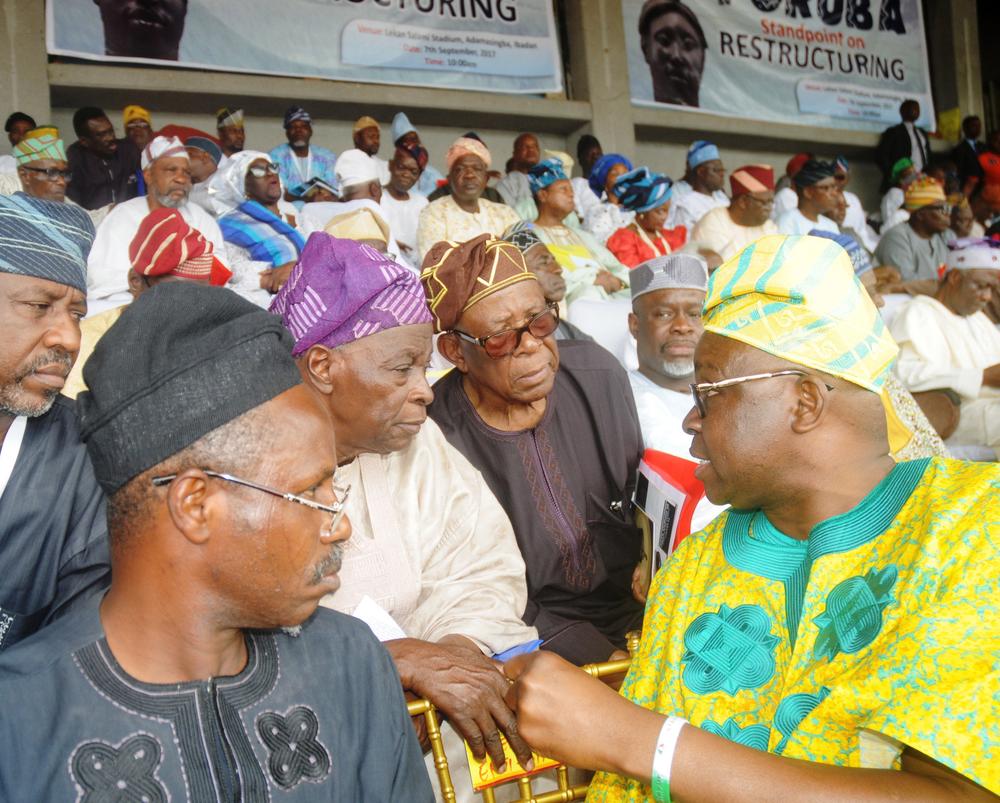 The Yoruba elders have insisted that Nigeria must return to a proper federation as obtained in the 1960 and 1963 constitutions to ensure peace and meaningful development.

They made this view known at the Yoruba summit held in Ibadan on Thursday, which attracted Yoruba leaders, governors, parliamentarians, social cultural groups, professional bodies, market leaders and youth groups.

The summit after exhaustive deliberations issued a communiqué signed by Afe Babalola (SAN) and Dr Kunle Olajide, the Aare of Efon Kingdom.

According to them, the country as a multi-ethnic country could only know real peace and development when it is run along federal lines.

The summit resolved that the greatest imperatives of restructuring Nigeria was to move from a rent-seeking and money sharing anti-development economy to productivity.

It stated that this could be achieved by ensuring that the federating units are free to own and develop their resources, while they pay agreed sums to the federation purse to implement central services.

The summit agreed that the federating units, be it states, zones or regions, must themselves be governed by written constitution to curb impunity at all levels.

It demanded that Nigeria should be a federation comprised of six regions and the Federal Capital Territory, Abuja, while the regions shall in turn be composed of states. 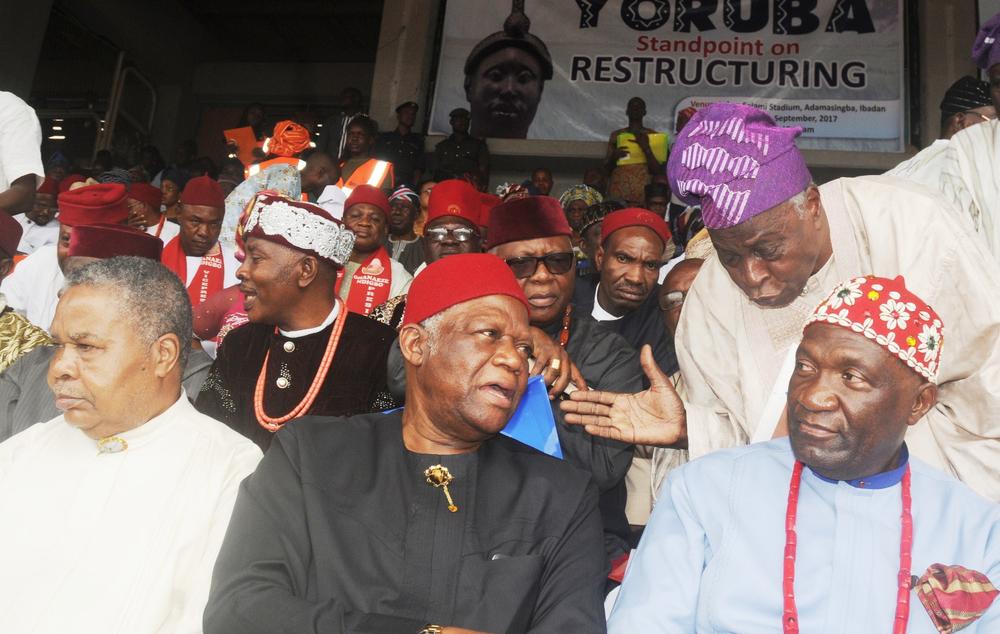 Pic.15. From left: Leader of the South South delegates, Sen. Ike Nwachuku; former Secretary to the Government of the Federation, Chief Olu Falae; and President-General of Ohanaeze Ndigbo, Chief John Nwodo; at the Yoruba Agenda for Restructuring in Ibadan on Thursday (7/9/17) 04826/7/9/17/Esther Bode Are/JAU/NAN

“The Federal Government should make laws and only have powers in relations to items specified on the legislative list contained in the constitution of the Federation.

“Each region shall have its own constitution containing enumerated exclusive and concurrent legislative lists regarding matters upon which the regions and the states may act or legislate.

“Contiguous territories, ethnic nationalities or settlement shall be at liberty through a plebiscite, to elect to be part of any contiguous region other than the region in which the current geo-political zone or state boundaries places them,’’ the communiqué read.

According to the summit, states as presently comprised in the geo-political zones into which they fall shall become regions and continue to exercise the executive, legislative and judicial functions currently exercised.

“States within a region shall determine the items on the legislative lists in the regional constitution for the purpose of good government and the administration.

“Also, provision of common inter-state social, economic and infrastructural requirements. Residual powers shall be vested in the states.’’

The communiqué noted that the power to create states shall be within the exclusive powers of the region, which shall be obliged to create a state provided a plebiscite is conducted.

This, it said shall be following a request by an agreed percentage of the residents of the ethnic nationality within a state, while the state holds the power to create local governments and assign functions.

The summit resolved that states shall be entitled to manage all resources found within their boundaries and the revenue accruing therefrom.

“The issue of the entitlement of littoral states to shore resources and the extension of such rights from the continental shelf and rights accuring to the Federal Government shall be determined by the national assembly.

“For a period of 10 years from the commencement of the operation of the new constitution, there shall be a special fund for the development of all minerals in the country,’’ it stated.

The summit added that government of the federation shall raise the sum by way of additional taxation on resources at a rate to be agreed by the National Assembly.

It stated that the National Assembly shall set up a body to manage the funds with equal representation of nominees from each of the regional governments.

The summit also said that the National Assembly shall set out and specify the guidelines for the administration of the funds exclusively for this purpose, while the president of the Federation shall appoint a chairperson for the entity so formed

The summit had recalled the great strides made by the Yoruba nation in the years of self-government until the abrogation of the federal constitution in 1966.

It stated that such was evident in mass literacy, novel infrastructural strides and giant leaps in all spheres of human development.

The summit warned that Nigeria was working dangerously to the edge of the slope except urgent steps are taken to restructure Nigeria, saying there was need to restructure from a unitary to federal constitution.

Related Topics:FederalismRestructuringTrue Federalism
Up Next

Be Happy for Others