Editi Effiong: 'Things Come Together' - An Insight into the Wikipedia Ad Campaign

After Chude Jideonwo’s thoughtful review of Anakle’s work with Wikipedia on the “Things Come Together” short film/ad, my dear friend Saratu Abiola’s advice was that I write a ‘director’s cut’ for how the film came to be. I am usually reluctant to do this kind of thing, but I am learning to take advice, so here goes. In this piece, I will address some of the common questions we’ve been asked about the Wikipedia project. I’ll also add some behind-the-scenes commentary to make the story sweet, since I have neither Chude’s style nor his grammar.

Why Things Come Together?
I believe that film is one of the most effective means of preserving our rich history. Since Anakle works at an interesting confluence of technology and advertising as digital agency, we decided to use this position to make some of those storytelling dreams come true.

In 2016, we wrote an entire season of cheeky parody stories inspired by Chinua Achebe’s Things Fall Apart and other books for a content marketing campaign. We pitched it to a Nigerian brand, which promptly turned it down. We shared it with another brand manager, and got turned down again. I have come to be grateful they turned the series down, because when Wikipedia sent their brief, it felt just right.

Here’s the thing about us Africans: we have rich history, with opportunities at every turn to use our experiences to tell powerful stories, but my experience is that we often do not. We eschew the risk in telling powerful stories, so we do the bare minimum, just enough to get by. After the hype of the Bride Price app, we found ourselves flooded with requests to build viral campaigns (once again, the thing is not sauce that you just put inside soup and it blows), but when we got to the meat of the stories that drove viral engagement, brands always backed out. But what about the other non-risky stories tied to our common Africanness, stories of our history or heritage? Too often, it takes foreign validation to make us brave enough to tell our own stories.

I wrote the outlines of Things Come Together in my bathroom. It wasn’t hard because we already had the concept designed from the other stories we did the year before. After the story was formed, Solomon Osadolo took it home and returned with the first draft of the script, which we sent back with major edits. After he worked on it? It was faya! I remember reading it to Uyi Omokaro, who loved it and suggested we accent Pete Edochie’s “Wikipedia” response as “Nwikipedia”. That is now one of my favourite details.

In many ways, everything just came together for the story. I still do not know who named it Things Come Together. In a way, the story named itself.

How did Pete Edochie get involved? And why him? 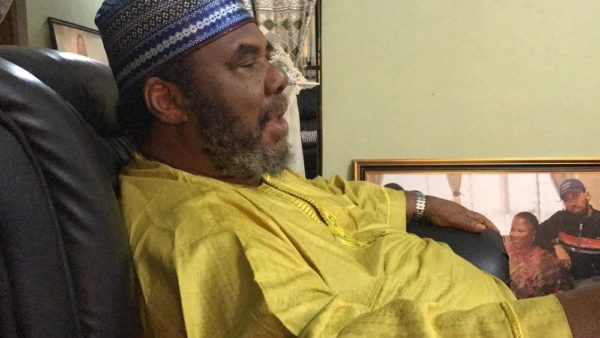 We wrote the story with Pete Edochie in mind. I would have felt lost if he had turned us down, because I cannot think of anyone else who would have fit this role. He had played Okonkwo in the TV production of Achebe’s Things Fall Apart, a role that helped cement his legend forever.

The other question we have seen consistently is: why Pete Edochie for a young, online audience? Chief Edochie might not be on social media, but he’s one of Africa’s top internet memes. A quick search for “Pete Edochie” or “Pete Edochie” memes on Google Images will return hundreds of images with proverbs. There are countless Pete Edochie proverbs handles on social media. So the choice was made based on history as well as relevance to the audience. 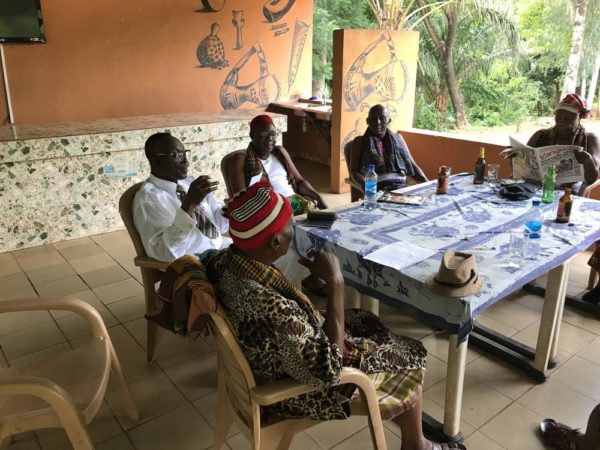 After getting the legendary Pete Edochie on board, we decided to get even more of the old Things Fall Apart cast from the old NTA production. It became an obsession. Luckily, with the help of Chief Edochie, we were able to get many of the men who were in the old TV production, including Chief Nduka Eya who played the role of Ezeudu in the NTA production, to play the wise “Maazi Obi-Erika”.

Why was Nduka Eya the lead character, instead of Pete Edochie? 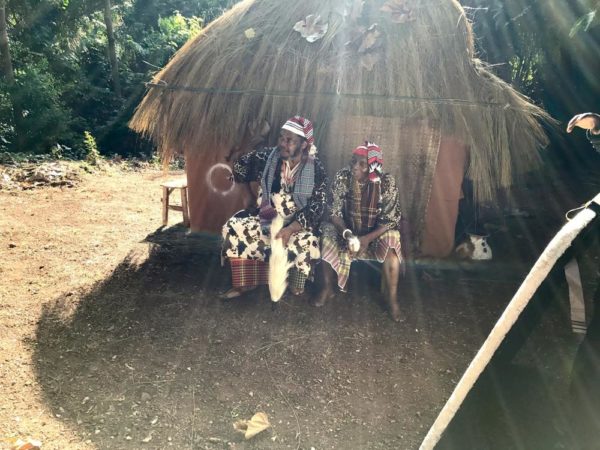 Achebe’s “Obierika” was always smart, so it was only fair that Maazi Obi-Erika, inspired by that character, is the one introducing the new ‘god’ to his friend played by Pete Edochie. Achebe’s Okonkwo was a man of few words. He often observed when others spoke. In Things Come Together, the now-older village legend played by Pete Edochie is in a white man’s classroom. We don’t know how he got to be in that classroom, but having got there, he would not be expected to be a top student.

We wrote Things Come Together to honour Chinua Achebe’s legacy of storytelling by embedding hidden messages in plain view. Things Fall Apart in itself was ultimately a metaphor for what broke us, as Africans. So what can bring us together in modern Africa? Knowledge.

Things Come Together is a time warp.The fluidity of time in the story also allowed us to bring the old legend, an older, more mellow character, into a classroom. He is still not the most brilliant man, but isn’t rushing to chop down the white man’s representative. Instead, he waits and asks questions. Chude also noted the political symbolism embedded in the story. Yes, the patience of our older hero is also a metaphor. If the young Nigerian soldiers in 1966, both in the first coup and the counter coups, were more patient and asked more questions, maybe our country would not have had to go to war.

As Saratu Abiola told me, our vision of leadership is a masculine one, and men don’t ask questions. We must redefine leadership, help our leaders become more humble, to accept that asking questions is not a weakness.

A nod to women 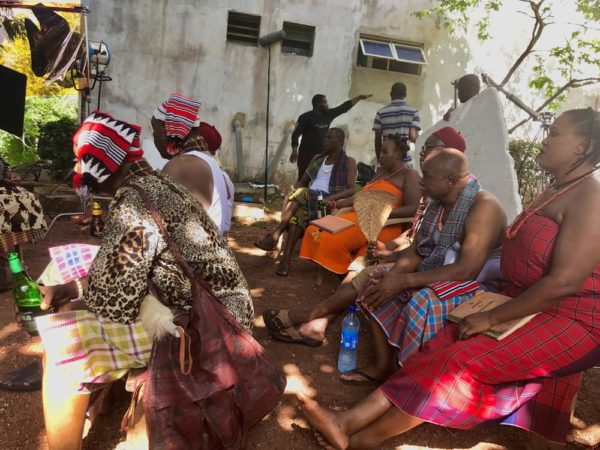 Shooting an ad for a global brand is an opportunity that does not come every Tuesday. We owed it to ourselves to send a couple of cryptic messages. In Achebe’s Things Fall Apart, the men of Umuofia had very little regard for women, and would definitely not have let women into what was essentially a gathering the elders of Umuofia. Writing a time warp is great, because it allows us project a more liberal setting. We were very deliberate in making sure a woman was on the “classroom” front row, as well as behind Maazi Obi-Erika, so we could have a woman in almost every shot.

Editorial choices that break the heart 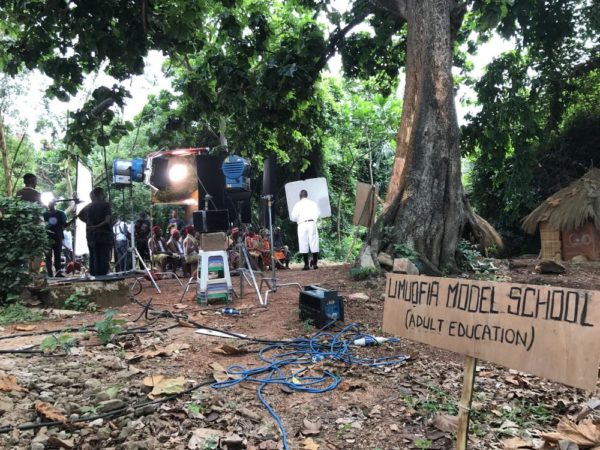 The first cut we got from studio was the original we wrote, and had words like “Maazi Okonkwo” and “Umuofia”. We had to make the sad legal decision to cut those scenes out. It broke my heart. I still have the original film, and it’s the one I watch.

Bonus question: Why did Pete Edochie not poison Maazi Obi-Erika for being smarter in class? 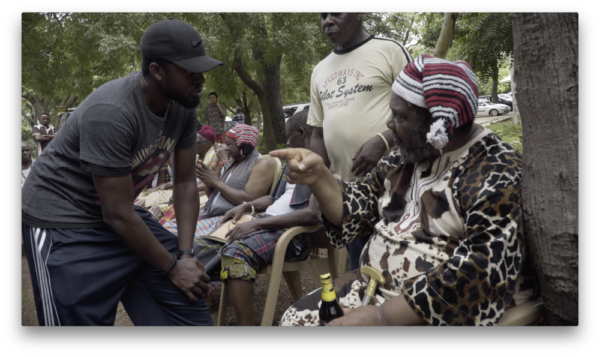 This, right here, is the kind of stuff that keeps Nollywood producers up at night, and a real oversight on our part. Right at the end, we should have had them share a drink of palm wine, which Pete Edochie brought with him, and then the Chief Ndula Eya’s character would die, and Pete Edochie would make a proverb before getting up and going home satisfied.

Well, watch out for Part 2. To God Be The Glory.

Does Things Come Together not weaken the legend of Okonkwo?

Putting the old chiefs in a classroom does not weaken their Igboness. It does not even conflict with Achebe’s vision of Umuofia, even as he observed the falling apart of his people. As Obierika observed in the book, the proponents of the new world were wise. Maazi Obi-Erika in Things Come Together is probably how Obierika would have been if the Things Fall Apart kept going. Indeed, African intellectual leaders mostly adapted to the new civilization they found themselves in, while also holding together the stronger bonds of African traditions. Writers like Achebe and Wole Soyinka demonstrated this distinct ability to straddle the multiplicity of living in the warped and fast-changing socio-religious maelstrom that colonial Africa had become.

The men of Umuofia, and indeed Nigerians as a whole, still struggle with the influence of the new cultures that threaten to drive us apart. We have embraced Christian and registry marriages, yet still insist on traditional (engagement) ceremonies. In Ibibio culture, for example, the exchange of drinks during marriage has survived 400 years of constant assault on every aspect of traditional culture by Christian religion and culture.

We have also never stopped fighting back. As Nigerians are wont to do, in Things Come Together, Maazi Obi-Eika couches the weapons of his ideological warfare rather subtly.

“The people you represent are too poor, they can only have one god.”

‘Nedu Ahanonu: A Stutterer’s Tale! 5 Things that Helped Me Thrive

Editi Effiong is the founding CEO of Anakle (www.anakle.com), a leading digital agency in Lagos, Nigeria. His work has included the design, development, and distribution of some of Nigeria's most successful digital products and applications. He also writes on technology, design, education and business leadership.