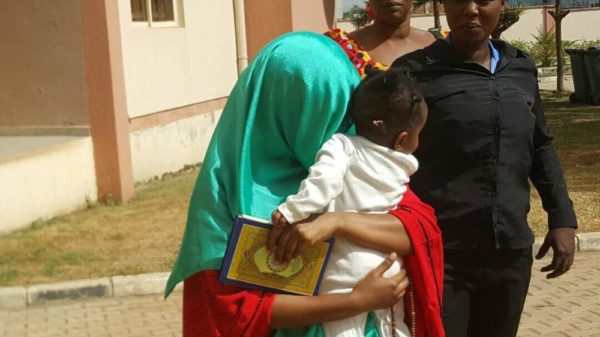 Maryam Sanda, the woman who allegedly stabbed her husband Bilyamin Bello to death has been remanded in prison custody by the FCT High Court, Sahara Reporters reports.

The FCT police command had arraigned her on charges bordering on culpable homicide.

Maryam, who had been in police custody since her arrest, was seen in tears, holding the Qu’ran and her 6-months old baby as she made her way to the courtroom, covering her face from the media.

She pleaded not guilty to the two-count charge. Her counsel Hussein Musa pleaded that she should be remanded in police custody as she’s a nursing mother, however, the presiding judge Yusuf Halilu ruled that she be remanded in Suleja prison and adjourned the case to December 7th for further hearing.

The couple had been having marital troubles and a friend of Bello who had spoken to Punch said the deceased had just returned to his home from the hospital after part of his ear was bitten off by Maryam, only to meet his end.

Bilyamin had also been reportedly advised to leave his house, and was planning to divorce Maryam – his second wife – before he was killed.

Perfume Lovers! Stay winning this season with Bonheur Perfumes for as low as N10,000