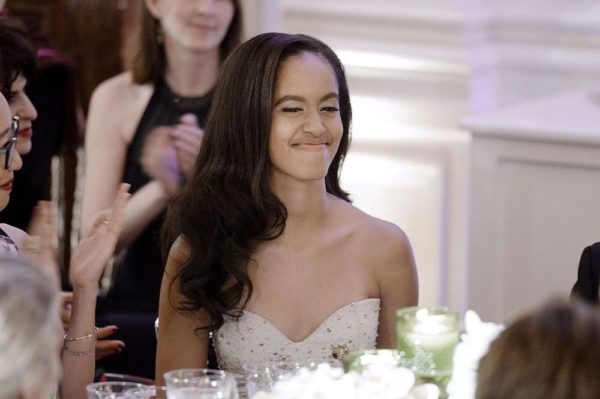 19-year-old Malia Obama‘s private life has been under intense scrutiny since her father vacated the White House earlier in the year.

There have been videos of her in concerts, school mixers, even one in a bathroom.

Newssites and blogs have written think-pieces on her lifestyle, talk-shows asking their audiences what they think.

To her defense have come both former and current president’s children Chelsea Clinton and Ivanka Trump.

Clinton, on her Twitter, asked that Obama be left to live her private life. She wrote:

Malia Obama’s private life, as a young woman, a college student, a private citizen, should not be your clickbait. Be better.

Malia Obama’s private life, as a young woman, a college student, a private citizen, should not be your clickbait. Be better.

Trump also echoed the opinion, saying that Obama should be allowed the privacy her peers enjoy. She wrote:

Malia Obama should be allowed the same privacy as her school aged peers. She is a young adult and private citizen, and should be OFF limits.

Malia Obama should be allowed the same privacy as her school aged peers. She is a young adult and private citizen, and should be OFF limits.

Rapper Common on his Twitter wrote what has now become a hashtag in support of Malia Obama: “Let Malia Live.”

Other Twitter users have also come to her defense, asking that she be left alone. See the tweets below:

Malia Obama kisses a fellow student and blows smoke from her mouth and the Right is ready to call for Obama to be Jailed.

Donald Trump cheated to win the election and the Right is ready to make him a Saint.

Are we living in upside down world?

All I know is Malia Obama needs better friends who won't put her business online all the damn time.

I don't want to know what that young private citizen is doing. She's minding her business.

Them trump supporters when they see Malia Obama living the best years of her life at Harvard pic.twitter.com/n8JoOtL2xh

Malia Obama being a normal teenager at college is held to a higher standard than Trump who said he'd date his own daughter and grab women without permission pic.twitter.com/Zsgn6jpEiA

Ppl acting like Malia Obama is the only the college kid that smokes Marlboro’s and kissed a boy in public. pic.twitter.com/a4VeXqDBE1

We can only hope she turns out exactly like this smoker. pic.twitter.com/pZGzSfEPB7

The only thing I find offensive about about Malia Obama blowing smoke rings is that it confirms she’s so much cooler than I was at 19.

Malia Goes to Harvard. Weed is legal in Massachusetts. She also has kind of shitty friends though. https://t.co/S6Z5cdIE0o

Atiku “will never be a threat to President Buhari” – El-Rufai