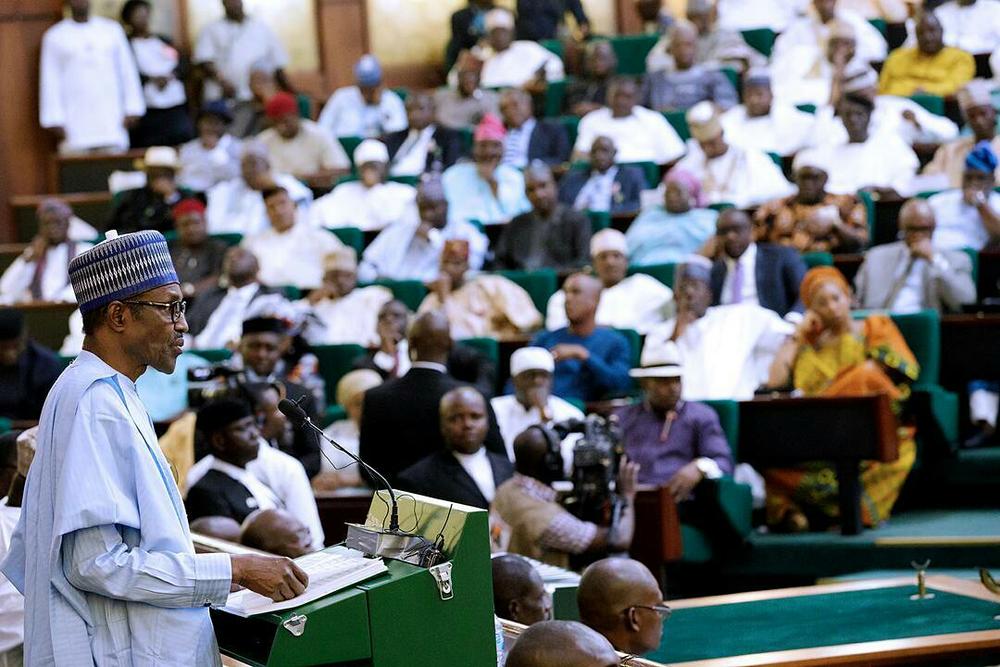 President Muhammadu Buhari on Tuesday presented an appropriation bill of N8.612 trillion for 2018 before a joint session of both chambers of the National Assembly.

The President, while presenting the document, said the budget is meant to consolidate the achievements of previous budgets.

He said the 2018 budget is also to deliver on Nigeria’s economic recovery growth.

The proposed budget had a 16 per cent increase compared to the 2017 appropriation bill of N7.298 trillion.

Buhari said that 30.8 percent of the budget proposal had been dedicated to capital expenditure, while N3.494 trillion had been set aside for recurrent expenditure.

According to him, N2.014trillion of the budget has been set aside for debt servicing.

He further stated that the 2018 appropriation was under pin by an oil bench mark of 45 dollars per barrel, oil production level of 2.3 million barrel per day and exchange rate of N305 to the dollar.

The President said the size of the 2018 budget is a reflection of his administration’s determination to consolidate and sustain the nation’s economic growth.

While reviewing the performance of his administration, Buhari noted that N1.2 trillion had so far been expended on execution of capital projects through 2016 budget.

He said the Federal Government had also invested $500 million in the nation’s Sovereign Wealth Fund (SWF) as part of deliberate measures to support government’s diversification drive.

The President announced that the nation’s external reserve stands at $34 billion as of September 2017, while the country recorded trade surplus of N56.5 billion as at second quarter of 2017.

On food security, the President said that a committee headed by Vice-President Yemi Osinbajo had been inaugurated to check smuggling of food items across the country’s border towns.

He warned that food smugglers would be dealt with accordingly by the government.

Paradise Papers: I hide no asset and violate no law – Saraki