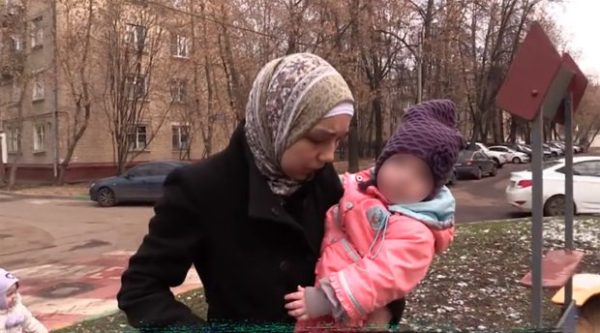 Lilia with her youngest daughter

A Russian woman named only as Lilia has spoken out after being allegedly held prisoner and as a sex slave for 6 years.

Lilia, who escaped after managing to call the police, had 4 children while in captivity in a tiny concrete flat with the windows boarded up, Metro reports.

She was locked up all the time, she said, and was repeatedly beaten, sometimes with a stick. She said:

We were locked inside all the time. I could not go out anywhere.

He kicked me, beating me with a stick. Once he broke his stick when beating me and the children saw.

While she was never allowed to see sunlight, the man took their children out occasionally, she said.

My youngest daughter has been outside only once in her life.

He said to our son “When you grow up, you must keep beating her like this, with your fists, kicking her, because she is very bad.”

This is what he told our children about me.

Her lawyer Sergey Afanasiev said she had been subjected to ‘violence and torture.”

Laila and the children are now reportedly living in a homeless shelter, and the children, hidden inside the house for most of their lives, are said to have been left with “development problems” and cannot speak properly.

Related Topics:LiliaRussiaSergey Afanasiev
Up Next