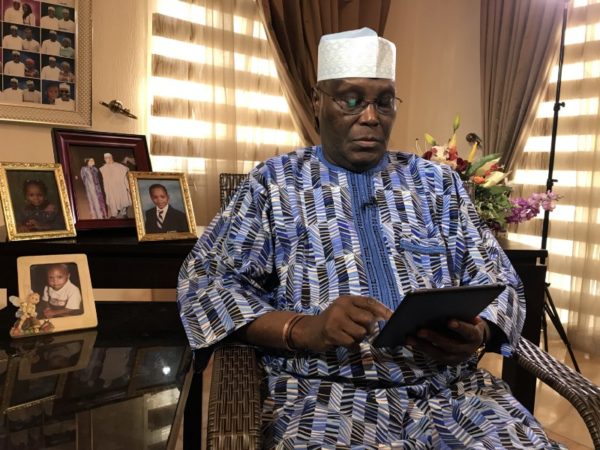 I read your post on Instagram. It was hard to miss it because it was on every major news website. I would like to say that you were mostly right. The questions you raised in your post are similar to the ones I have been asked by other young people on social media, so I am replying this not just to you as a person, but to all young Nigerians who have asked similar questions.

Firstly, you are right. The Nigerian youth have often been taken for granted, and almost every leader in our history has taken young people for granted. But it’s important to point how this started — for people like me who saw Independence; our leadership was mostly driven by young people. Then came the coups, and the civil war, and then more coups. Nigeria ended up with a long period of military dictatorship for many decades, in which time; those young leaders aged, but still remained leaders. Fela, Gani, Enahoro, and Beko were young leaders, yet remained leaders until their demise. That was because of the stagnation brought on by decades of political instability.

By the time we got to 1999, the young people of the day had not been prepared for leadership, because there was no leadership or apprenticeship process under dictatorships. This is one of the reasons the age of leaders has continued to rise. That was because of the leadership stagnation brought on by decades of political instability. Imagine a school that did not graduate any students for 5 years, by the time the top class finally graduates, you will have a backlog of undergraduates.

Our young people are not to blame; we need to remedy this national failure. Last week, there were local government elections in Akwa Ibom State, with over 60% of the seats won by young people, less than 35 years old. That’s how progress can be made. Young people need to participate from the grassroots, all the way across board. Appointments are good, but getting elected is even better. I also understand the issues around funding elections which keep women and young people out, and I will address this in an article I am publishing soon.

Nigeria on the other hand, is the country of their parents, the country where leaders are constantly failing them, of Boko Haram, of herdsmen violence, of recessions and joblessness. Our young people need us to make our country live up to the aspirations of Naija by fixing the problems associated with Nigeria.

I think it’s important to address the accusation about my tenure as Vice President, that I did nothing for young people. Firstly, as VP, I can only be judged on the responsibilities I was given. A VP obviously is not the driver of government. For example, you can’t blame Prof Osinbajo for all that is going on with the current government. He can only do what he’s allowed to do.

But let me speak about what you can judge me by, my assigned responsibilities. As VP, I assembled what is arguably the best Economic Team ever in Nigeria. It was made up of young, world class professionals, who came home to work. Some of those professionals are now political leaders, governors and world leaders in their own right.

If you ask what our first task was, coming into government in 1999, it was to bring stability to the economy after decades of military rule. For example, between 1999 and 2003, oil prices then were hovering between $16 and $28 yet we managed to pay up salary arrears from decades back, clear up our national debts and built up foreign reserves. Our GDP grew at the fastest rate we’ve seen since the return to democracy.

You mentioned that I never brought young people into leadership, but my record speaks differently. I have a proven record of bringing young, unknown professionals into service. Many of the professionals and ministers I brought in were in their 30s and early 40s. Some of those young leaders have become governors in their states. I went to the World Bank and met a bright lady, convinced her to come back home, and she became a star in our government. To show you we had effective leadership, the same lady could not replicate her exploits under a different government.

I was also in charge of privatization and I have witnesses that I never interfered with the process. I never bought anything belonging to the government. I was quite wealthy before coming into government, with declared assets worth hundreds of millions of dollars in 1999 (which was put in a trust when I became VP); so it was understandable that many of the wealthy Nigerian business people who participated in the privatization programme were my friends. Did I use my influence to get them better deals? No. As the then DG of BPE testified under oath, I never used my position to interfere with his work.

I oversaw the telecoms revolution, which is why young people like you, I Go Dye, now have a flourishing career. Under our tenure, we witnessed a large repatriation of Nigerians back to Nigeria, driven by the hope of the recovering economy. It is sad that many of those young people are heading back abroad now — this is to show you that leadership matters.

I know many of these have been forgotten because it was a long time ago, and successive administrations did not follow up on the progress we made. But that is also not to say we were blameless. I was largely frozen out in the second term of our tenure, and I regret that we had that disagreement with my boss. Some say I was disloyal, but I looked at the events in Zimbabwe recently, and it gives me confidence that I did the right thing fighting the attempts to elongate the presidential tenure beyond eight years. If I did not win that fight, do you think we would be having a discussion on young people getting into leadership today?

Intels. I want to address this because you mentioned it. It was the Shagari government that started the Onne Port and later abandoned it. In summary, my business partner and I saw an opportunity to build Nigeria’s oil industry using world class infrastructure, but driven by Nigerians. We went out and took loans to build the facilities, but as we went on, more opportunities opened up, which allowed us access to even more capital. We ended up borrowing hundreds of millions of dollars, mostly from Europe, to build the port, singlehandedly charting the course of Nigeria’s oil industry.

Honestly, I did not ever think we would be that successful, which was why I kept my day job, when we started it. It was just what you would call a side hustle, but it grew so big, and I had to quit my government job to focus on it. Today, every oil major uses the facilities we built. The government only became clients after the oil companies. Our company has expanded to several countries in Africa. Even the FG has seen that that company is the most competent logistics company in Africa, which is why it gives Intels the most complex operations to manage.

But Intels as a corporate citizen is loved in the locations it operates. That’s because we invest in scholarships, hire young people from the community and train them to become world class technicians. As CSR, we have gone into partnership with the NFF to train young Nigerian footballers, and provide support for the local league. We are loved by the youth in our local communities.

In my home state of Adamawa for example, I’ve created over 50,000 direct jobs and 250,000 indirect ones. We are the largest private employers of labour in the state only second to the state government. It’s not a lot, but it does help reduce unemployment. Who do you think are holding those jobs? Yes, young people.

I Go Dye, I’m not a messiah. I do not promise Eldorado or $1 = N1. But I always ask to look at the economic progress we made under my leadership and what I am doing in private business and judge me by those. People say I became rich in government. It’s a lie. I had hundreds of millions of dollars in assets declared in 1999. My businesses (my shares of which were held in a Blind Trust while I was in government) continued to grow since then. I was able to personally bankroll the PDP back then, so surely I was not poor. But I understand it is politics. So it’s normal to be called names. But how come in all these years, none of my opponents has found any evidence to indict me?

The people who are afraid of me changing the status quo they enjoy will always try to frighten young people about me.

The success of young Nigerian entrepreneurs in IT & technology, retail, music, and arts shows that given the chance, they can run anything. My job is to be a bridge, which supports our young people achieve these ideals. I will never say only I can do this. I can’t do it alone. I need your support, I Go Dye, to help our economy grow, to ensure that within 10 years, our young people can take over completely.

In summary, I Go Dye, I am not a person who says what he cannot do or show proof. I am giving you an invitation to sit down and ask me any questions you may have. I would also like to take you around, show you some of the businesses I have built, and let you speak to the young people who run those places. It is good to try to convince you that I can do better by our young people, but it is even better to show you. Send me a direct message on Twitter, and we will take it from there