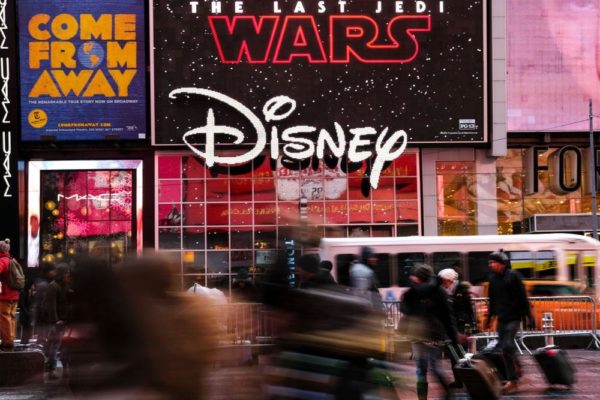 NEW YORK, NY – DECEMBER 14: The Disney logo is displayed outside the Disney Store in Times Square, December 14, 2017 in New York City. The Walt Disney Company announced on Thursday morning that it had reached a deal to purchase most of the assets of 21st Century Fox. The deal has a total value of around $66 billion, with Disney assuming $13.7 billion of Fox’s net debt. (Photo by Drew Angerer/Getty Images)

The Walt Disney Company on Thursday revealed it has reached a deal to obtain most of 21st Century Fox‘s assets for $52.4bn and pay off the company’s debts, making the total figure $66.1bn, Variety reports.

The huge move means that Disney, which already owns ABC and ESPN, will be acquiring 21st Century Fox, except Fox Broadcasting Co., Fox Sports, Fox News, Fox Television Stations and a handful of other assets, which 21st Century Fox has said they will spinoff into a new company.

To seal the deal, Disney CEO Bob Iger has extended his contract for 2 years, moving it from July 2019 to the end of 2021, a move demanded by 21st Century Fox head, Rupert Murdoch.

“The acquisition of this stellar collection of businesses from 21st Century Fox reflects the increasing consumer demand for a rich diversity of entertainment experiences that are more compelling, accessible and convenient than ever before,” Iger said about the deal.

“We’re honored and grateful that Rupert Murdoch has entrusted us with the future of businesses he spent a lifetime building, and we’re excited about this extraordinary opportunity to significantly increase our portfolio of well-loved franchises and branded content to greatly enhance our growing direct-to-consumer offerings. The deal will also substantially expand our international reach, allowing us to offer world-class storytelling and innovative distribution platforms to more consumers in key markets around the world,” he continued.

Murdoch said he believes the move will unlock even more value for shareholders, as 21st Century Fox will shareholders will be receiving 25% of Disney shares. He said:

We are extremely proud of all that we have built at 21st Century Fox, and I firmly believe that this combination with Disney will unlock even more value for shareholders as the new Disney continues to set the pace in what is an exciting and dynamic industry.

Furthermore, I’m convinced that this combination, under Bob Iger’s leadership, will be one of the greatest companies in the world. I’m grateful and encouraged that Bob has agreed to stay on, and is committed to succeeding with a combined team that is second to none.