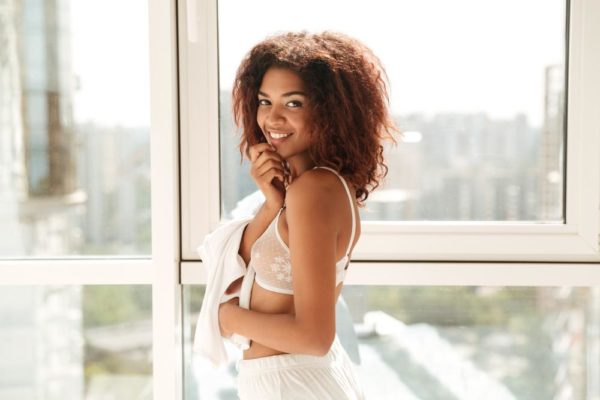 I noticed it when I was younger, way before I realised that I was a woman.

I do not know what term to use, but I would describe myself as one who used to be both bra- and breast-shy. Strange as it may sound, I did not like bras whilst growing up. Even worse, I did not like when people called them “brassieres” although the term is correct.

I don’t know what it was exactly about them, but I think I saw breasts as restricting objects, and often as items of distraction and unnecessary attraction. As for bras, I just never understood why one would not wear a vest inside to cover them up, or why ladies would let the straps show.

I remember when I was in Junior secondary school (JSS) 1 and my friends were talking about how they were anxious to start wearing bras and quit the bra-tops that they wore. It was almost like a hot topic as I attended a girls-only secondary school; they talked about the types of bras they would like to wear and the different colours and how busty they wanted to be, while I sat there, just nodding along.

I found it weird that they found bras appealing, and even weirder that they wanted bigger breasts. Every time I looked at myself in the mirror, I enjoyed seeing how small mine were and how easy they were to maintain when showering and body creaming. It was also relatively easier to run or jump while playing without feeling like something would slap me in the face or having to hear someone naughty sing “jingle bells”, which they often did when girls with bigger breasts ran.

One of my biggest fears back then was that I would one day grow to have big breasts, especially because I knew that I had that gene running from my mother’s side. I dreaded it and prayed hard against it; if I knew what I know now, I may not have prayed so hard.

I never wanted to wear a bra, but oh well, age caught up with me and so did puberty. By the time I was twelve years old, my breasts were ripe and it was finally time for me to join the bra-gangs. My classmates were already a year or more into the business while I continued to postpone mine.
One day, a family friend asked my mother why she had not yet bought me a bra. “I have o! She has just refused to wear them”, my mother replied, scowling at me. “Why naa?” the lady asked me, “I don’t like them” I almost whispered, turning around to check that no boys were listening. “If you don’t wear them, your breasts will fall o and be sagging like mine. You’re too young for that” she said laughing loudly.

I wondered whether she was telling the truth and thought about the singer, Eve, who did not wear any back then. I looked down at myself and my nipples were staring right back at me. Maybe she was right, maybe I needed to start wearing bras. Thankfully, I had packed a couple of the ones my mother had bought for me in my suitcase and as I said my goodbye from the school bus taking me back to my boarding school, I knew I had given into the pressure.

That was how my bra journey began and even though I had finally become a wearer, I had promised myself that I would always wear a vest inside, that I would never wear lose or padded bras to ensure that my breasts did not look bigger and I would ensure that the strap never slipped off so that no one would know I wore bras, thus I adjusted them too tightly. I continued to live my life accordingly until one fateful day, several years later, a day that I would always remember.

It was the night before my friend, Priti, was going back to her home country, India, after we finished schooled and so I went to wish her farewell. She had a lot of clothing she was leaving behind and wanted me to take some of them, so I literally bent down to select some just before heading home. I took a couple of shirts and some dresses, and was about to leave when she asked me why I had not taken any of the bras. I told her that I did not need them, but she tried to persuade me, saying that they were of good quality and that she had barely, if ever won them. I thought about how I used to buy Okirika (already used) bras in the market when I was younger. I did not know who had worn them previously and yet I would buy them if they looked good and yet there I was, stopping myself from getting a free nice bra from someone I was confident about her good personal hygiene.

So eventually, I took a red bra; it looked sexy and nothing like any of the ones I owned at that time. She gave me a plastic bag to put my selected items and we said our goodbyes. I ran to catch the bus home and in my haste to bring out my bus fare, I dropped the bag while on the bus. After paying the fare, I rushed to take a seat. I had just sat down before the driver said “Excuse me! I think you dropped something red.” At that moment, I’m sure it would have harder to distinguish between the colour of the bra and my face. I walked as quickly as I could to go pick it up but another lady had already “helped” me and held it out to me.

I could see the amusement on some of the guys’ faces on the bus and one of them even whistled. I snatched my bra and went back to my seat, wishing that I never took the bra from my friend in the first place. Throughout the bus ride home, I stared out of the window avoiding eye contact with anyone as if I thought that someone would try to make a conversation with me about bras.

That day was one of my bra-shyest moments; however it also became a breast-defining moment for me. It made me think deeper about why I felt the way I did – why did I feel so uncomfortable about bras when everyone already knew that I wore them? Why did I want so badly to hide my breasts even though I am female? These thoughts opened my mind to a new level and with time, my rules of bra engagement rules evolved.

I no longer wore vests as often as before, unless my blouse was too transparent; I did not adjust my straps as tightly, besides they were causing unnecessary body line marks, and I began to wear padded bras when necessary to give my breasts some right boost. I was slowly letting go of my conservativeness while still keeping some core personal “breast and bra” values and I felt much better each day. More importantly, I started learning to like my breasts and to appreciate bras – the different colours, shapes, sizes, cups, and details.

Finally, I was definitely no longer bra-shy even though I remained breast-covered.

BN Prose: After the Money by Feyisayo Anjorin