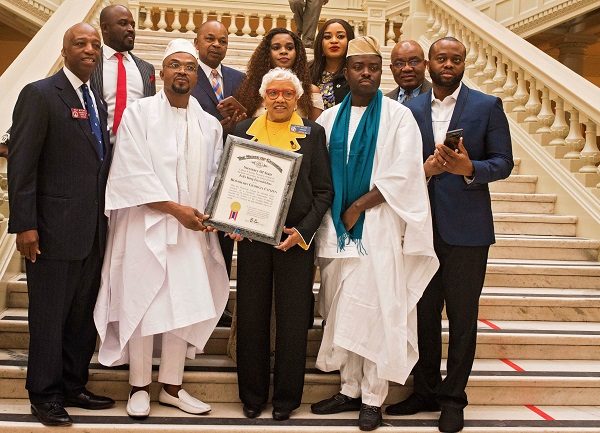 Serial entrepreneur and philanthropist, Felix King Eiremiokhae has been bestowed with the Honorary Georgia Citizen for his charity work in Nigerian communities through his foundation, Felix King Foundation.

The honour from the State of Georgia, which took place on the floor of the Senate in Capitol building, confers on him the Goodwill Ambassadorship for the state and according to the Secretary of State, the State of Georgia, Brain P. Kemp, the honorary citizenship affords him to travel to other states, and to nations beyond the borders of the United States of America, or wherever he may hereafter travel or reside with the ease and privileges of a citizen.

The resolution for the honour was Senate resolution 608 moved by senators Gloria Butler of the 55th and Seay of the 34th and adopted in the Senate on January 23rd, 2018. Part of the resolution read “whereas, it is abundantly fitting and proper that the outstanding accomplishments of this remarkable individual be appropriately recognized. Now be it further resolved by the Senate that the members of the body commend Felix King Eiremiokhae for his many valuable contributions on behalf of those in need and extend best wishes for continued support” 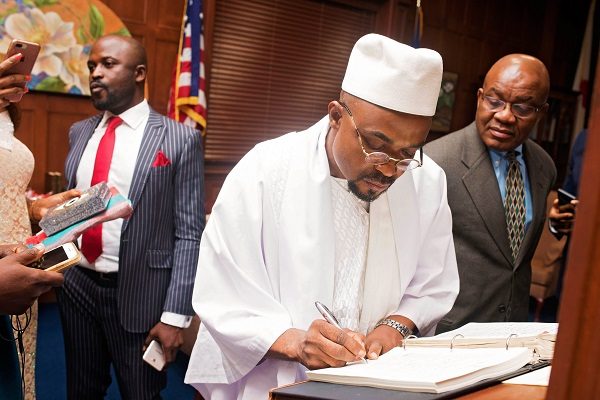 Reading the proclamation on the Senate Capitol in the State of Georgia, Gloria Butler, Senator representing District 55 of the state described Felix King as a philanthropist extraordinaire. According to her, King started his foundation in 2015 without enlisting the support of people and institutions other than out of his personal savings and his wife. She said that the Foundation’s key objective of giving hope to the poor and vulnerable widows and their children in communities across Nigeria by transforming their lives from despair to hope through different programmes such as business start-up initiatives, farm aids programme, free food distribution, educational grant and medical aids are in line with the principles the people of Georgia live by.

She said in the process, the Foundation has helped more than 1000 women and 3000 children. Much like the State of Georgia, Felix is interested in the protection of women and children. Apart from his involvement in several humanitarian activities that have brought succour to several poor and vulnerable women across Nigeria, King through his Foundation presented a bill to the Edo State House of Assembly last year for that purpose and he is hopeful that it will be passed in 2018.” 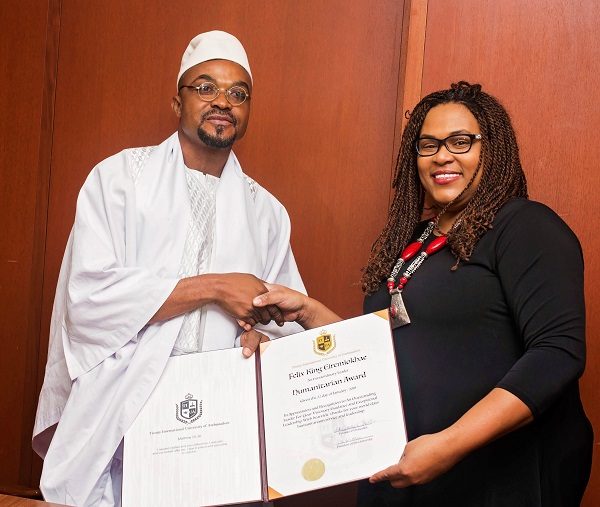 In another development, King was also bestowed with a Humanitarian Award by the Trinity International University of Ambassadors also in Georgia for his works of charity and care for widows and the vulnerable. 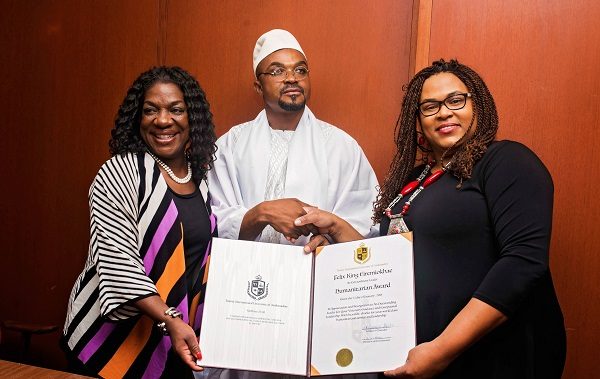 Responding to the double honour, Felix King in his acceptance speech acknowledged America as a land of opportunities and one that can be likened to a land that flows with milk while Nigeria is a land of hope and hidden treasures.

He further thanked the Senate for the honour bestowed on him saying it was a true testimony of the true American values. While in Atlanta, Felix King also paid a visit to Medshare, a humanitarian aid organization dedicated to improving the quality of life of people, communities and the planet by sourcing and directly delivering surplus medical supplies and equipment to communities in need around the world. He discussed possible collaboration to meet the needs of many people and communities in Nigeria. The outcome of this meeting was an opportunity for the foundation to donate 50 hospital beds to one of the specialist hospitals in Nigeria.

Felix King also in his acceptance speech noted that one of the greatest catastrophes ravaging Africa today is the prejudice against widows and the vulnerable in most of the continent’s societies. He noted that what makes the situation worse and dangerous is that it appears as if nobody was ready to make the interventions needed to make change possible.

“It is difficult to understand why the society exploits the pains and vulnerability of widows and their children by exposing them further to poverty, diseases, and other forms of social and economic deprivations in a manner that suggests we are holding them responsible for their misfortunes”, he expressed his happiness at the award and pledged his determination to devote more of his time and resources towards making life more meaningful for the less privileged, especially the widows and vulnerable children.

Eiremiokhae is known an entrepreneur, who conceived the idea of owning his own business early in life. In 2004, he incorporated Oracle Experience Limited and in 2014 he incorporated Mayor Biscuit Company Limited, also known as MABISCO. In a country where the unemployment rate is very high, he has been able to provide employment opportunities for nearly one thousand individuals.

Felix is also a philanthropist. In 2015, with the support of his wife, he started Felix King Foundation with the objective to give hope to the poor and vulnerable widows and their children in communities across Nigeria, transforming their lives from despair to hope through different programmes such as business startup initiatives, farm aids programmes, free food distribution, educational grants and medical aids. In the process, the foundation has helped more than 1000 women and 3000 children. Apart from his business and charity works, Felix is also a devoted family man, who is loved by many and happily married and they are blessed with four children. He is an avid lover of good music and widely travels.

Love is in the Air!? Check Out these Valentine Gift Options & Enjoy the ‘Jumia Loves You’ Sale with Exciting Offers

Babangida’s Aide Kassim Afegbua to Turn Himself In