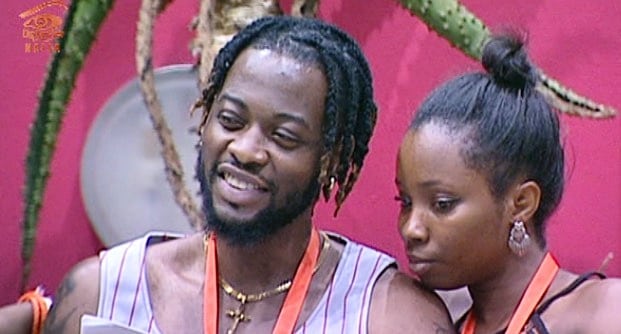 Did you watch day 37 of the Big Brother Naija 3 reality show?

As expected, the Housemates were extremely tensed out, following the unexpected Eviction of Gelah (Angel and Ahneeka), a pair they’d put up simply because they suspected an overthrowing strategy. The Housemates were forced to reshuffled their decks and polish the guns.

The HoH qualifier took place relatively late and as always, it was highly anticipated and we suspect that the boys expected to bag yet another win  but it seems that Ahneeka left BamBam with the girl power flag because she raised it high and gracefully earned Bamco the HoH title.

The Nominations were the highlight of the day as they oozed revenge and had a stench of vindictiveness.  Mito lead the pack with four Nominations followed by Tolex with three while Lifu and Tena tied at two each. Bambam and Rico Swavey had to deliberate and BamBam literally pretended to be thinking about who she’d save between Tena and Tolex, This because they were Saved last week. She eventually made the expected pick and saved Tena, replacing them with poor Ceelo who thought they’d dodged the bullet.

During the Diary session, The Housemates motivated their choices with reasons varying from pairs being over ambitious to simply wanting them to feel the pressure of being up for Eviction. Teddy A was stern about wanting Tobi out because of his heightened ambition and explained that if the roles were reversed, he would have done the same thing that BamBam did as their friendship is built on loyalty and integrity.

There was a general consensus surrounding the Nominations as the possible Evictees said they understood that the game is full of tension and sharpened swords were bound to be brought out.

Match Made In Heaven

If Biggie was a matchmaker, he would deserve credit for creating Bamteddy, the monicker that pinned Teddy A with BamBam. When BamBam walked into the House, her almond eyes, heart-shaped face and enchanting smile sent electric sparkles in the air.  With her petite frame, she was soft-spoken and held herself with an irresistible feminine candor. It didn’t come as a surprise that the buff and tattooed Teddy A was drawn to her as a magnet, which Biggie helped consolidate when he first paired them.

Early on, BamBam and Teddy A had made no secret that they intended to play the game fully and be lovers during their stay in the House.  Teddy A came clear from the get go that he had a serious relationship outside the House, which explained why shortly after their pairing Teddy A appeared withdrawn from her, like if he had a change of heart especially after telling Vandora to mind her own business. BamBam had turned to Angel in whom she confided of her frustrations about Teddy A. Yet she held on and forgave because she was so smitten after all, and he brought the whole of his alpha male self-back to her.

Somehow Bamteddy were caught up in their own game, as measured by the increased frequency of their locked lips. Teddy A and BamBam had become an item in the House, following each other all the time, eating, showering together and sleeping in the same bed. Like any couple, they did have a few fights, and threw each other cold looks over food, but their attraction is so much stronger that there is no tension that a kiss did not dissolve.

For the first time during Diary sessions, tough guy Teddy A admitted to reciprocate the feelings for Bambam, who used her Head of House priviledge to Save him from Evictions. What do you make of Bamteddy’s fiery relationship? Genuine or bogus?

Just Who Are You?

While self-confessed church girl BamBam appeared to have more than one trick up her sleeve with her bad boy BBNaija lover Teddy A, her standing with other Housemates tells a different story. She gets along with the girls, in that she only had a spat with Vandora. Yet she seemed particularly risk-adverse as she has made no particular efforts to go out of her way to create special bonds with Anto, Nina, Alex, Ifu Ennada or Cee-C.

In that regards, her strategy appears to be akin to Nina’s as both rely heavily on their male partner to validate their presence in the House. Like Nina, BamBam seemed to have enjoyed the wallpaper flower status conferred to her by virtue of her alliance with an alpha male. It is only when Biggie gave her the Secret Task to steal Anto’s baby doll that it brought life back into her. The next daring act BamBam has posed was to hide Ifu’s Roc Da Mat cap on Biggie’s instructions again, a costly action that Ifu has not digested yet.

It is true that BamBam’s voice is purely hypnotizing, and she could use it more often to express herself beyond her musings with Rico. Under the Bamco nickname, BamBam and Rico have been seen laughing and holding open-heart conversations that she and Teddy A don’t have. With his easy-going and non-judgemental personality, it is easy to see why Rico has become her only relationship outside the Bamteddy couple.  She doesn’t engage further with other guys beyond the strict necessary.

Perhaps it was a matter of time for her to show her true colors, and it is hoped that BamBam will let her true self shine into the House now that she has secured the Head of House throne.

What do you think it will take for BamBam to rise into herself?

With this week placed under the auspices of environmental awareness, Biggie put Housemates up for a significant challenge of caring for their own immediate environment – the House. Biggie twisted it up a notch by imposing water rationing on the House. Water he added was to be provided only three times each day. Housemates exchanged side glances upon realizing they would have to enter the shower at the same time to make the most of the available water.

Taking a seat in the Chair, Head of House BamBam read the instructions to a focused audience that looked flabbergasted as the list went on. Biggie expected Housemates to perform a thorough spring cleaning of the House, starting from scrubbing the floors to disposing of garbage, making beds and folding clothes.

In the storeroom, Lolu had retrieved a bucket full of lemons, baking soda, vinegar, empty bottles and containers that he placed in the centre of the lounge area as Housemates learned that they would have to create their own eco-friendly cleaning product out of the lot. No sooner said than done, a Ninja emerged from the elevator with an empty bucket and browsed through every single cupboards to remove all existing cleaning products. The Ninja disappeared briefly only to return with another empty bucket to repeat the task.

After a quick round of questions, Housemates came together without a hurdle and agreed to divide the chores. Armed with spray bottles filled with DIY mixtures, Housemates carried the Task out without an ounce of enthusiasm.  The only ones who took the Task at heart were Rico Swavey and BamBam who had castigated Housemates for their untidiness and lack of consideration. Most surprisingly, BamBam seemed to enjoy roaming from one room to another to supervise progress as Head of House.

The pairing dynamics have somewhat forced us to look at the Housemates as units and we’ve pretty much been swerved from looking at their individual traits. This may be due to the fact that they all tried to play as a ‘team’, however with the Eviction cycle in full swing, the Housemates were forced to bring out their weapons, some guns and a few roses.

We all enjoy a little romance, or maybe a lot and there’s a bit of comfort in knowing that it’s not all scripted. Hence the general reactions surrounding the love nests and how their sadness is inevitably translated into our own lives. The hardcore lovers find themselves drawn to other hard core loves; the broken hearted seem to gravitate towards tear worthy moments and empathize with the ‘victims’; the players raise their hands and pay homage to other players, low key thanking them for justified representation and; those that waged war against love and lost miserably seem to be rooting for those break ups and ruffed feathers. Are you perhaps any of the above?

More Involved than You think

The Big Brother Naija game is not limited to the TV screens and social media posts. We are literally part and parcel of all the drama and involuntary melancholy. Infact, it wouldn’t be completely careless to assume that we’re more invested and pulled in than the very people we’re watching as we know every one of their moves and have a multi dimensional glass view of the twists and plots. Clap along when your in-house muse beats the clock and nails a challenge, feel the butterflies when your fave finally smooches their crush and cry a pond when the Housemate you’re rooting for shares a sad story. Fam, your own life is an untelevised version of Big Brother and you’re just there trying to win the ultimate prize. The long awaited and highly contended promotion; the guy/girl that every girl/guy wants; the lottery jackpot, even with just sand granule sized chances of winning.

Just like the Housemates, you’re very aware of the fact that in some of your races, only one person will lift the trophy but you race anyway because along this path, there are victories far more valuable that the ultimate. The friendships, the lessons and the self discovery; and just like that fam, you’ve been psyched. Keep voting for your muses.

Have you been watching? What did you think of the Day 37 activities?