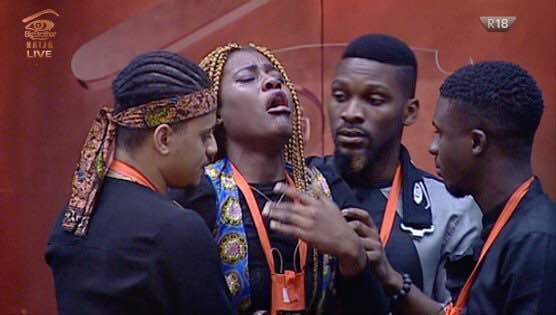 Did you watch day 42 of the Big Brother Naija 3 reality show?

After an awesome party by DJ Jimmy Jatt, the Housemates enjoyed Ifu Ennada’s meal and quickly prepared for bed. However, Rico Swavey’s over indulging got him vomiting and demanding the Housemate’s hasty reaction to cleaning up and making sure he is all good.

However, things quickly changed when Cee-C and Tobi were at each other’s throat throwing insults and swearing at each other, something that they have done before. The only difference this time is that there was a mediator, Teddy A.

Even though he tried to listen to both sides of the story, it wasn’t clear what triggered the start of the argument. Cee-C did mention, though, that because its eviction she wants to clear the air because anything can happen tonight

Meanwhile their strategic partners had to intervene and calm them down, but did they listen? No.

Tobi’s over intoxication didn’t help the situation either. Alex had to speak to him in a louder voice, asking him to drop the fight and go to sleep.

Cee-C then found solace in unlikely sources, Leo and Alex. Her possibly leaving the House has got her shook so she tried to make amends with Alex and successfully done so.

Even though the morning started rocky with Rico vomiting in the House to Cee-C and Tobi’s fight it was all well when everyone went to sleep.

Like we’ve seen before, Tobi and Cee-C’s fight are for them only. They ended up forgiving each other and spending the night in the same bed.

The saying “Two is company, four is a party, three is a crowd. One is a wanderer” proves to be true in every sense of the word, when it comes to these two.

The morning after the night before has proven to be canvas for the Housemates to paint all their current feelings about the game so far.

This morning started like every other Sunday morning in the House, all the Nominated Housemates began to get their hair done in preparation for tonight’s show and immediately started talking about the looming Evictions. It was evident from their body language and behavior that many Housemates are nervous. Teddy A and BamBam who are obviously safe, lounged around and gave their two cents about it all too. Cee-C said that if she survives tonight she’ll need a divine intervention, Tobi interjected that if he survived tonight’s Eviction then people must just pack because he’s causing trouble for everyone.

There has been talk that tonight the Housemates will be unpaired which will obviously shift the whole dynamic and change the game. An interesting conversation arose through this between Lolu and Leo. Leo stated that he hopes they are unpaired today, but with that said he also feels it taught them responsibility and to not only think for themselves but for someone else. Lolu feels he was paired with the most troublesome girl in the house to which Leo disagrees and feels that Alex is. He goes on to say how Alex loves confrontation and fights and has only toned it down because of him. Lolu said that he feel Alex is provoked by Cee-C and that is why she behaves in this way.

From Nina‘s visible anxious body language to Leo outright saying that he is not ready to go home tonight, there is a definite mood of anxiety in the House. No one is sure of what will transpire and this has caused them to talk a lot about the game and their strategies. Cee-C was clutching at straws talking about previous Big Brother contestants and how the game has worked previously.

Lifu (Leo and Ifu Ennada) have had quiet an interesting journey in the Big Brother House. From being paired almost by default to winning the Pepsi Roc Da Mat Challenge and dodging the Eviction axe last week, their stay has been a battle and a half.

On her personal capacity, Ifu Ennada has been a calabash of mysteriously mixed and ever flowing cocktails. Besides having shown some emotion during her diary sessions and the kissing episode courtesy of her and Bitto, there have never been instances where she over-displayed her vulnerability. We aren’t certain whether her strong and never broken demeanor was all a front but, Ifu Ennada’s name can easily be used to as an adjective to describe a person not easily broken. Her patience seemed to go from schedule to instant because she’s lost it a couple of times and when she got to the climax of things, she couldn’t be censored. She represented all that she stood for and firmly stood for all that she represented.

Leo on the other hand either gave too little or just enough. His stay in the House has been somewhat philosophical, ‘in peace I live and in peace I let live’. This lead to him being almost invisible and only ever taking centre stage when talking strategy, business, or when putting off Alex sourced fires. Talking about Alex, his last weeks in the House were almost completely cantered around her and as were hers. He also let loose and confessed his ‘Like’ for her during last week’s live show, possibly pressured by the fact that she was the first to bare her heart. He has however shown that he places integrity at the forefront of everything and has mastered the art calm; him sensei.

It’s Lifu, Default or Not

The Lifu pair came unexpectedly but both constituents gave an absolute maximum to make it work. Their collaborative efforts made it possible for them to bag the Pepsi mega price despite all the world war three worthy controversy. They were also part of Team Blue, the bunch that managed to knit their brains together and come up with a concept that was convincing enough to win them the Heritage Bank Task. Their graceful display of maturity and strategic intelligence has seen them this far into the competition. A well-deserved kudos to them.

Have you been watching? What did you think of the Day 42 activities?