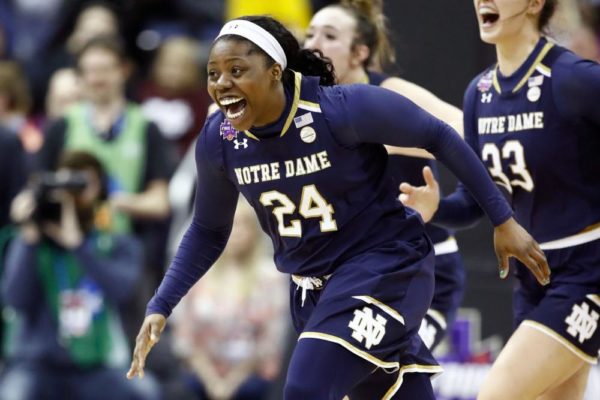 Arike Ogunbowale, a US born college basketball player of Nigerian descent, twice made the shot of a lifetime to win her team, the Notre Dame Fighting Irish, the NCAA championship.

Thing is – she had done it before, just 48 hours earlier.

In the semi-final match against UConn, Ogunbowale hit a 2-pointer with just 1 second left, crushing the hopes of Kobe Bryant, a UConn fan who was present.

Kobe had congratulated her on her shot, and she replied: “Wow, my life is complete. The GOAT

.” But he replied, saying it’s not complete until she finishes the job.

And she did finish the job, dashing the hopes of Mississippi by making that 3-pointer at the end of the game. Easily, she was named the tournament’s most outstanding player.

Arike was born in the United states to parents Gregory and Yolanda Ogunbowale. Her father, Gregory, was a footballer in Nigeria and once served in the Nigerian Army before he relocated to the United States. Her mother, Yolanda, was her grade-school basketball coach.