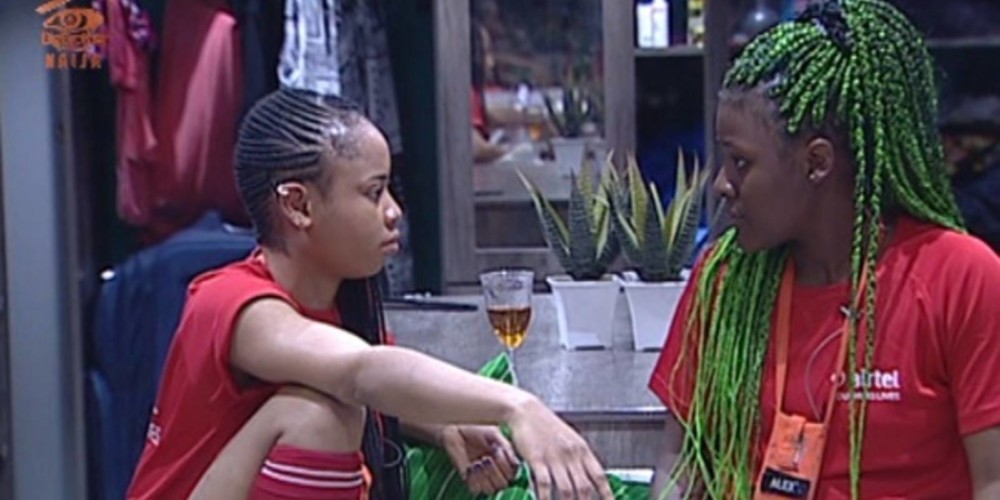 Did you watch day 74 of the Big Brother Naija 3 reality show?

After the Task festivities, things took a bit of a turn and the slope went slippery when Alex decided to put on her good friend cloak and confronted Nina about her ‘post-breakup’ behavior; mentioning that Miracle was in fact hurt by all that has happened, but simply found solace in the company of the rest of the Housemates. Thanks to Nina’s new found stubbornness however, it all went south real quick.

Seeing as Nina refused to initiate their peace making process, Alex decided to play mediator and true enough, convinced a very minimally interested Miracle to engage and hear Nina out. The festivities took place in the confined bathroom space that only seemed to get smaller as the tension between the not so former lovebirds grew. It was pretty clear that Nina was adamant in her pursuit for sentimental justice and despite having a rather messy approach, she managed to put her point across, displaying the ‘not no naïve’ side to her and in not so many words, letting Miracle know that she was close to not caring anymore.

Miracle on the other hand had enough calm for the both them and even though he looked confused and rather uninterested for more than half the time, he managed to get his very well-articulated point across and explained how he drew his conclusions; confirming what Alex had said about him taking an emotional knock thanks to her ‘bff’ reference but deciding against self-pity and isolation.

Through the rolling of eyes and having almost the entire House as jury in this specialized court session, Miracle and Nina’s apologies followed the oath-taking format as per the mediators Anto, Alex and Tobi and after a while of verbal pushing, pulling and shoving, love won, low-key though.
The winds of forgiveness seem to have blown about overnight because unlike last night when the two refused to even seal their apologies with a handshake; today saw them locking hands, call it morning glory. Mina is back!

From Burgers to Burpees

“Lifetime on the hips” for who? There’s no resting on your laurels in the Big Brother Naija House when Lawrence the trainer is around – and if your spandex is weak, trust and believe you will need an extra pair of tights (or six) waiting in the wings once ‘Mr Fit’ is done with you. We all know our Housemates would probably be more than content with buns of cinnamon instead of buns of steel, but THAT ladies and gentlemen, is not going to fly!

Put your back into it

Long days of cooking and even longer nights of partying had started taking their toll on our sexy eight. Arena Task panting, daytime snoozes and general sluggishness was the order of the day, until Biggie decided to switch things up completely. Instead of greeting the dawn by way of the deepest of snores, our Housemates now break the day with lunges, contortions and all manner of gut-blasting exercise. Crying like a baby because it’s too painful and you can’t do it? Won’t draw you any sympathy. Complaining about your bad back? Drink some water, drop down and “give me 10”.

Luckily, all of that morning exercise is paying off in a big way. We’re seeing leaner bodies that are conditioned for optimal performance during the Payporte Arena Games, as well as bodies that are able to stand their ground when food and meat fights break out.

Eviction on the Brain

With the weekend fast approaching, Anto and Khloe stole some time away from their napping fellow Housemates, to discuss what the possible outcome of Sunday night’s Live Eviction Show might be.

The two are Nominated for possible Eviction alongside Lolu, Cee-C and Miracle and will be going toe-to-toe for a coveted spot in the eagerly anticipated Finale. This is not the first time they have found themselves with one foot outside the door. Luckily, the last time it happened, they were given another shot at the game via #BBBringBack.

Anto, in particular, seemed stressed at the prospect of possibly going back home empty-handed, but quickly got her confidence back. After summoning all the good vibes she could muster, Khloe put it all into perspective and reckoned finishing in the Top 3 is a prize on its own.

Khloe and Anto’s private conversation seemed to draw the attention of a curious Nina – and with a quick nod in their direction, the other half of Miracle asked her beau what the two were up to. Miracle however, seemed interested in only the plate of food he was wolfing down with fervour. A while later, Lolu, who has also been thinking about his future outside the House, advised Anto to get a lawyer because of all the opportunities that may be presented to them when they finally make their exit.

Only Tobi, Nina and HOH Alex are safe from possible Eviction this week (that’s if Big Brother does not throw a wrench in the works). Who do you think will be sent packing?

If there was a prize for the most enigmatic Housemate, Anto would likely win it. When she first entered the House, it was evident for all that she had a tough time connecting with her peers, outside Lolu with whom she shared an almost instant bond. Having lived and survived an Eviction, Anto came back with a revenge, determined as she was to show her true colors.

Ever since being voted back by the BBNaija fans, Anto appeared to have spun her game around to the Housemates’ delight. Whereas before, she kept her distances, Anto has radically changed tack, which earned her to be in everyone’s good books. Take Khloe for instance, the fact that the two have shared the Eviction experience has definitely helped them bond like never before.  Besides, Anto seems to have gracefully taken to Lolu’s peace brokering skills and borrowed from Rico’s water-no-get-enemy approach, which has paid off. She has also played a key role in the Minaship on several occasions as she has helped the two lovebirds mend their relation.

Branched Off A Dash Too Far

Anto’s apparent early indifference may have well just sprung from a tremendous self-control, a impressive feat in the face of all the drama of the Double Wahala House. Of late though, Anto has won unanimous praise from her peers who unanimously lauded her mature, caring and generous nature. It goes without saying that her keeping most of the romantic sparkles at arm’s length must have contributed to her standing. Tobi has been drinking in her every words, just like Miracle whose Head of House rule she once shared. As for Lolu, there seems to be no end in sight for his infatuation with her.

Not Everyone’s Cup of Tea

Yet it has been a whole different ballgame with Cee-C, who seemed to have retrenched since Anto and Khloe’s return. Cee-C and Anto spoke for the third time since the start of the show, and have yet to gel with each other. While Cee-C seem to be a non-issue for Anto, the reverse might not be true for Cee-C has struggled to get attention since the two leading ladies returned. As for Alex, although there is no hostility in the air, curiously, she has yet to closely interact with Anto. That they both are at different end of the spectrum, one being extrovert and the other introvert, may explain why.

Diary Sessions have become more tensed with the countdown to the end of the show. Yet Housemates still seem to have different interpretations of the Double Wahala that shakes the House’s wall.

Cee-C vs The House

According to Cee-C, the most of the wahala that took place was between Nina and Miracle, for she said Nina was someone who doesn’t listen. She also noted Lolu and Anto about whom she said she didn’t know what their issue was. Cee-C also added that last week she got closer to Khloe and she thought she’d be strong enough to ignore the crazy part of her but she didn’t and as a result found herself alone and without allies. Cee-C believed that Khloe demanded a lot of attention which she didn’t have any to give at this point of the game.

The House vs Cee-C

Oddly enough, no one else in the House agreed with her, starting from Anto who named Cee-C as the one person who thinks she’s in her own world. Anto regretted that on the rare occasion they spoke, she seemed like she was listening only to revert to her old ways. Likewise Tobi concurred that Housemates resented Cee-C a little. He admitted to deliberately avoiding Cee-C whom he said was always looking for opportunities to insult him. The tension between the two didn’t escape Lolu who lamented that the former couple were not in talking terms, although he had noticed that Cee-C kept glancing at Tobi a lot. For Lolu it remained to be seen whether they stood a chance outside of the House. For Miracle, Tobi and Cee-C are unlikely to solve their issues ever since Tobi has grown closer to Alex. Not once did Cee-C’s name come through Khloe’s lips.

I’ll Stand By You

Nina however seem to be the only Housemate who thought that Cee-C was very nice. That is only if one got to know her very well. For Nina, Cee-C was actually a nice person. Yet these two have come at each other’s throat on a number of occasions. This show is definitely not over until it is over.

Have you been watching? What did you think of the Day 74 activities?

Having this Much Fun is a Crime! Watch the Official Trailer for “Ocean’s 8”