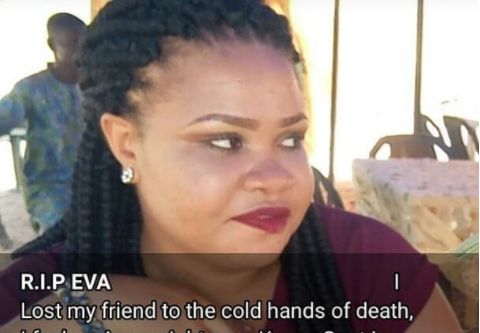 A serving corps member in Kwara state, identified as Eva who was undergoing the mandatory 3-week orientation at the Yikpata camp has died. The deceased was a graduate of Oil & Gas Engineering from the University of Port Harcourt.

She was said to have slumped on the parade ground and was attended to at the camp’s health clinic, before she was referred to the University of Ilorin Teaching Hospital. Sadly, she was confirmed dead at the hospital.

Eva’s friend posted about her death on her Instagram page.

In an internal release by one of the leaders of the corps members, Eva was said to have died of internal bleed for an undisclosed illness, according to the Camp Director.

See the release below:

In view of the recent event(s) on camp, a few concerned corp members, myself inclusive approached the camp director and other officials to table some pressing issues, particularly on the sad demise of our fellow corp member, Ms Chukwu Eva.

Many events have happened within the short interval of the news, notably the rage among friends of the deceased and other corp members as well as an incident involving an embittered corp member at the camp clinic.

It is with the realization that a protest could loom and that many things would go haphazard, we went to the authority. We also approached them on the news that was spreading rapidly amongst us about a herdsman spotted with ammunition within the camp.

The camp director listened to our agitation that was a blend of fury, but with respect for constituted authority. He was visibly agitated too and gave us particular reasons why we lost dear Eva. She was said to have died of internal bleeding, queried to a cause I would keep a secret for respect to Eva. The bleeding was the cause of the edema(swelling) that Eva had in her limbs. Eva was confirmed dead at Ilorin(Teaching hospital) having been rushed there with an ambulance.
He noted that against previous years where only medical corp members managed the clinic, professionals from the general and teaching hospitals were attendant to her until she was referred.
It is so sad that we lost a potential leader, but we pray her soul rests in peace.

On the issue of the supposed herdsman, the director said it was a non-uniformed policeman parading with ammunition. Notwithstanding, he had called the commissioner of police as well as ensured deployment of 11 local vigilante who had gone round with ammunitions to check the camp. He noted they know the terrain of the camp well since they are indigenes. He also said the efforts would be in synchrony with that of the 97 military and paramilitary personnel in the camp.

Notably in his argument was the fact that the camp has received very little attention from the state government. Said Kwara camp is only better than Abia camp in the whole country. One reason why the governor hasn’t visited the camp. Sadly, all concerns tabled to the state government have remained futile to date.

We requested for leniency in how the security personnel treat us, and he had made a promise to that effect. However, fellow corp members, it is expedient that we take good care of ourselves. We should report to the camp clinic early to avoid disastrous outcomes. And we should do so in good faith and not pretence.

In 13 days time, we’re out of here. We shall remain strong without any casualty.

This report is unbiased and based on evidence.

The NYSC is yet to release a statement on the corps member’s demise.

Get Access to Premium Healthcare Services for as Low as N12,000 with AXA Mansard Health