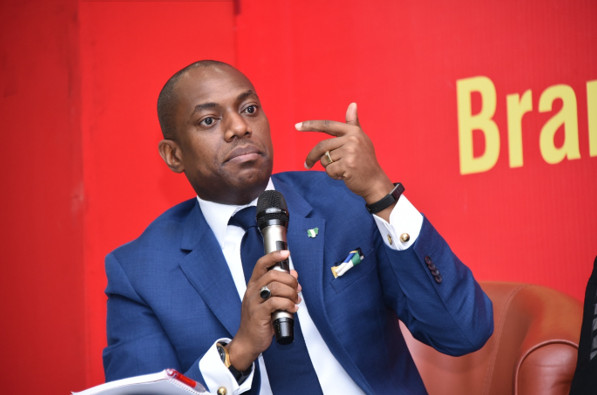 Durotoye had addressed a roundtable conference in Lagos with his vision and mission statement.

The statement had been published online, and Nigerians on social media had criticised it, describing his ideas as simplistic, and criticising its reliance on religion.

Durotoye, on his Instagram, has responded to the criticisms:

Some people say that mentioning GOD in Politics is outdated. .
.

Here are my thoughts.

In the good old days… .
. … when Britain became a truly GREAT nation, their anthem was GOD save the King/Queen. .
.
… when USA became the most prosperous nation on earth, their currency carried on it “In GOD We Trust” .
. . … when Nigeria, devasted by a civil war, needed to reunite & soon after, entered into our golden years of prosperity, we sang “O GOD of Creation”. .
.

In his book, MY VISION, Sheik Mohammed Bin Rashid Al Mahktoum mentioned GOD in almost every page as he described how they built Dubai into ‘The Miracle in The Desert’.
.

In Rwanda, ONE MILLION PEOPLE were KILLED in just 100DAYS!
Thereafter, President Paul Kigame went in search of Rick Warren & asked him to help them rebuild Rwanda into A PURPOSE DRIVEN NATION. Seven (7)years later, Rwanda became d fastest growing economy in Africa. Recently, Rwanda was voted the most desirable nation to live in Africa. A strong, prosperous united nation was rebuilt in less than one decade because they brought GOD into their governance.
.

So you may rightly say “Fela, the mention of God may seem to be outdated in politics”, but perhaps that is why one of the most blessed nations is now home to some of the poorest people. Perhaps it is bcs our ‘politricktians’ & rulers no longer fear God or even mention him. Otherwise, how do you explain the level of impunity in stealing, oppression, corruption, killings & lawlessness many of them operate with so blatantly?
.

It can NOT be wrong to mention GOD in politics. But it is wrong for a blessed nation like Nigeria to have so many people living in abject poverty … That is so wrong. .

I believe with all my heart that, by bringing God back into politics & governance is exactly how we will build Nigeria into the most desirable nation to live in.
.

So, let me be absolutely clear … I will carry God on my head and if by mentioning God, we cannot win the heart of the people, then that is alright by me.
.
As far as I know, except GOD builds a NATION, the NATION BUILDERS will labour in vain. Our generation can not afford to labour in vain.

Related Topics:2019 Electionsfela durotoye
Up Next