It is hard being creative anywhere in world and even harder in a country like Nigeria, where there are a number of factors that can work to stifle creativity.

Fortunatley, over the last few years, there has been a rapidly expanding art scene in Lagos as young artists have sprung up and are building a movement using their art to speak on current issues happening in the society.

Within the Lagos art scene, there is a growing community of hyperrealism artists who create hyperrealistic charcoal and pencil paintings and amongst them, are Ken Nwadiogbu and Chiamonwu Joy. 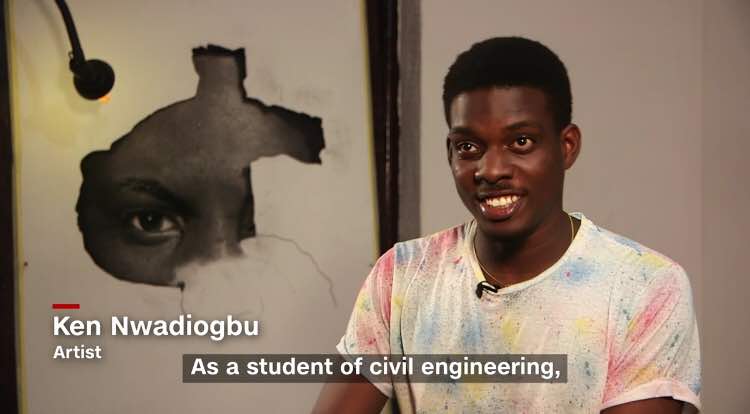 In this CNN Africa’s feature, 23-year-old Ken Nwadiogbu says he is using his art to change the way people think and showcase the African culture; the regalia, the poise, the dancing, the flaws and the beauty of it. 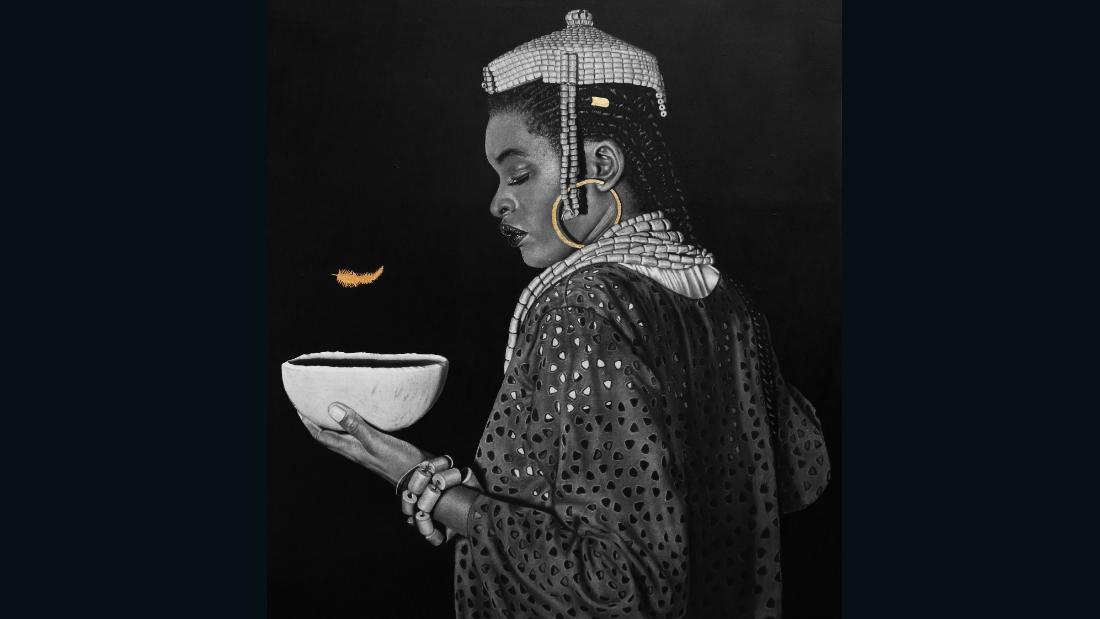 At first, he started off with drawing celebrity portraits for artists like Burna Boy, Tiwa Savage, Don Jazzy and Olamide, before later deciding to do more with his talent by exploring social issues like gender equality, mental health and black power.

I feel the society speaks and we listen, I feel it’s my job to reply (to society), to try to change people’s minds.

Ken’s most recent work is a piece for the #MeToo movement which he completed within 24 hours saying;

This is the first time I am finishing a work within 24 hours, it usually takes a month or two. 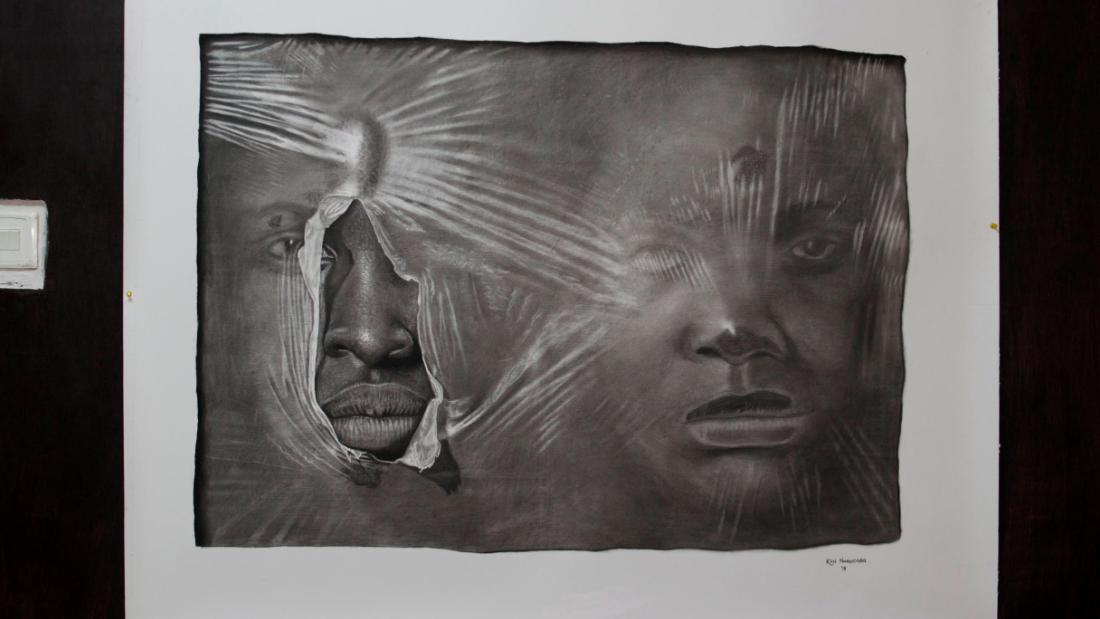 In the #MeToo piece, two girls are pictured trapped in nylon, one looking depressed and resigned to her fate while the other is breaking free and pushing the barrier.

Speaking on the emotional piece, he says:

The journey for Ken hasn’t however been easy, as he says it was a rough beginning for him because people discouraged him:

When you start having certain ideas for yourself, that’s when societal issues, family issues and every other issue comes in. Being a young artist makes people ask: ‘Are you not being too fast? Is this the best way for you? It gave me a very rough start in the art world.

Even though he is a civil engineering graduate, Ken “completely feels no regret whatsoever starting it and actually doing it,” and he is fulfilled and happy.

He’s creating a lifelike masterwork in his small studio in Yaba, a mainland suburb of Lagos. The area is also known as “Yabacon Valley” because of the presence of numerous tech hubs, and is a bustling neighbourhood of dilapidated colonial-era architecture.

Another hyperrealism artist profiled by CNN, is Chiamonwu Joy who is one of a few female artists in the scene. 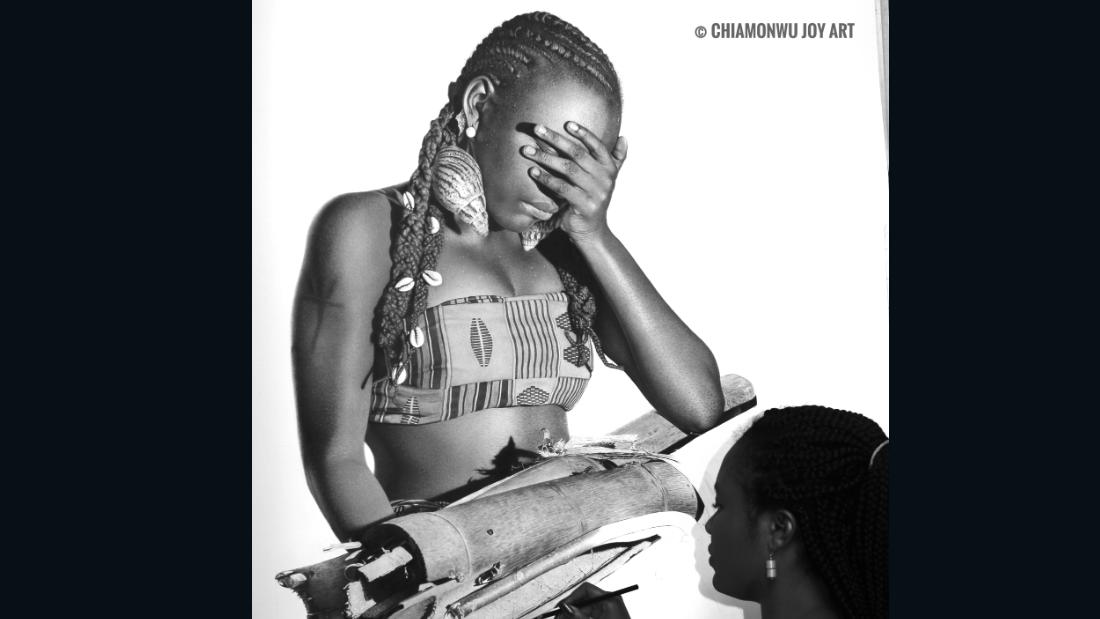 According to her, she didn’t go to school to study art but had the passion to develop her skills on her own

I have always had a passion for art and creativity in general, when I was in primary school I drew on any surface I saw be it paper desk and even my clothes. 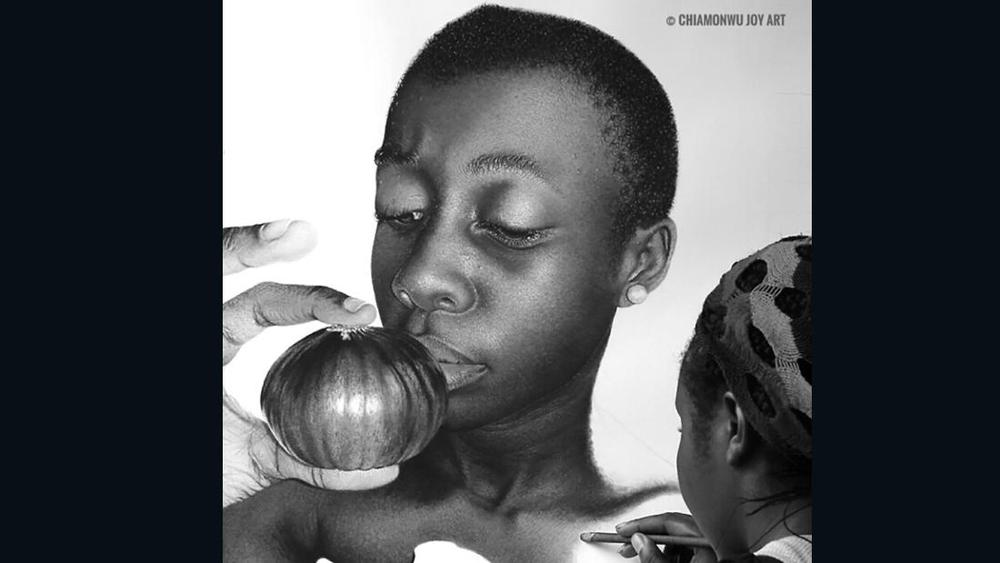 Chiamonwu who uses graphite, charcoal and paper to create life-like portraits gained international recognition when her work featured in TeenVogue, after a few of her drawings went viral.

Your Better Self with Akanna: Don’t Read This Article…