Michael Afenfia: About June 12 – What Would M.K.O Say? 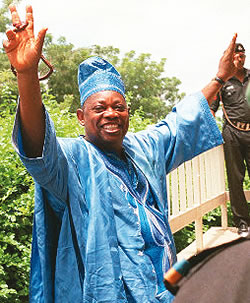 Like most of the people on my timeline, the news from Mr. President proclaiming June 12 as the new Democracy Day—instead of May 29 we have become accustomed to since 1999—was totally unexpected. As soon as I confirmed the story was true and not some fake news circulating on the Internet, I was overcome by a sense of justice.

Finally, June 12 might not be just another date on the calendar, or a sectional commemoration of a stolen mandate by an ethnic nationality and lovers of democracy who felt hard done by when General Ibrahim Babangida, as he then was, annulled what has now entered the records of our country’s history as the freest, fairest and most peaceful election in Nigeria till date.

The symbolism of the conferment of a posthumous national award, GCFR, the highest the country has to offer in honour of the memory of Chief Moshood Kashimawo Abiola is not lost on me. The implication of this, coupled with the proposed upgraded status and recognition of June 12, is that whenever that date is mentioned, kids from all over the country would ask questions and be told of the heroics of the late business mogul and philanthropist.

MKO went from being one of the richest men in the country to becoming a prisoner, jailed for his convictions and deprived of the luxuries years of affluence and generous giving bestowed on him. And he died a prisoner under very troubling circumstances on the July 7 1998 at the age of 60.

Because of the great sacrifice he, his wives – particularly the late Kudirat, who like her husband, paid the ultimate price in her quest for truth, justice and the enthronement of democracy, and their children made, the rest of us have a better appreciation of the freedom and liberties we so often take for granted.

Because of them, and the struggle they championed, new heroes of democracy emerged in the limelight of national activism and some have stayed there ever since, becoming ministers, governors and thought shapers.

With the announcement on June 6 by President Buhari, finally the Abiolas may be getting what they deserve and have wished for all these years. I saw a couple of tweets from some of his immediate family members and close friends, and I knew they were over the moon about the—should I say?—restitution after a quarter of a century?

Though the president’s announcement was unexpected, what was expected was the mixed reactions to the breaking news, and those didn’t take long in coming and flooding the internet. Some were ecstatic and thought the president did right. Others felt it was a good thing, but questioned the timing and the motive. There was outright condemnation from some quarters, and let’s not forget those who demonstrated apathy to the whole episode, after all this was a twenty-five year old wrong that was probably being righted for dubious and selfish reasons.

I wouldn’t lose a day’s sleep just yet over those who are indifferent, although I think it is a dangerous thing not to care about the decisions and actions of our leaders and how they affect us. For the people who have made public their condemnation of the president’s action, maybe they too are entitled to their views, but it would be nice to look beyond the apparent politicisation of the pronouncement and think first and perhaps only of the dead president Nigerian never had and his activist wife who was murdered in one of the most high profile and still unresolved murders in the country.

Let us also consider all that the family they left behind had to endure, sacrifice and live through while some of the beneficiaries of their parents struggle moved from one plum political office to another.

Those who are happy with the decision, but worry about the timing have adduced a myriad of reasons for their suspicions, but their arguments seemed to have found a commonality around a strategy to alienate the Jagaban himself, Senator Bola Ahmed Tinubu and shore up pro-Buhari sentiments in the South West. They throw in the name of former president, Olusegun Obasanjo there too as someone who might be potentially weakened or stopped by this curve ball from the presidency.

Why that should be a cause for concern, I am yet to fathom, but it has been a major point raised by discussants on social media and on terrestrial news platforms.

The question I would like to ask though is that with the growing number of those calling for the president not to run or scoring him low on his performance of the very job he was elected to perform, would the “educated” people of the South West suddenly look beyond the slow and tepid management of the economy, security and national development, and think differently of this present administration because Democracy Day moved from May to June?

In a free and fair election, something MKO and June 12 have to come epitomise, would more Yoruba voters show up on Election Day and thumbprint next to the drawing of the broom because of the president’s letter?

In the light of waning democratic credentials and perceived attacks on democratic institutions and voices of dissent or opposition, people are asking questions. I don’t know if it’s all coincidence, but it is a bit uncanny and shoddy even, come to think of it, that every potential threat is fingered in one gunrunning or armed robbery case or the other, or are caught with their hands in the national till.

I am a believer in the rule of law. I believe that no one is above it and anyone, no matter how highly placed, who runs contrary to the expectations of our criminal justice system should be made to face the music and the consequences of their actions. However, what is now becoming a cause for concern, is the seemingly selectiveness in the way the law is now coming after “certain” persons. One is fine. Two? Maybe a coincidence…but when it becomes three, four…a pattern starts to form.

If MKO had played dirty politics, I doubt politicians would be running to his legacy as cannon fodder at crucial times in their quest for power. If MKO could speak, I wonder what he’d say about the letter, and the whole GCFR and Democracy Day thing. Would he say, “Thank you, Mr. President. This has been a long time coming.” Or would he say, “Thanks, but no thanks, Mr. President, leave me out of your politics of 2019.”

Considering how he lived his life, what he stood for, what he lived for and the circumstances surrounding his death and that of his dear wife Kudirat, it’s hard to imagine how MKO would have reacted to the news.

For sure, the whole thing smacks of desperation and is ill-timed. The president can sign letters brought to him by his aides all he wants, without bothering to confirm dates and facts before putting it out there for the whole world to see, but his declaration is certainly a victory for those who have clamoured for this for years and it’s certainly a victory for his children and I can only be happy for them.

#PVCitizen: Make we do this thing together, Get Your PVC