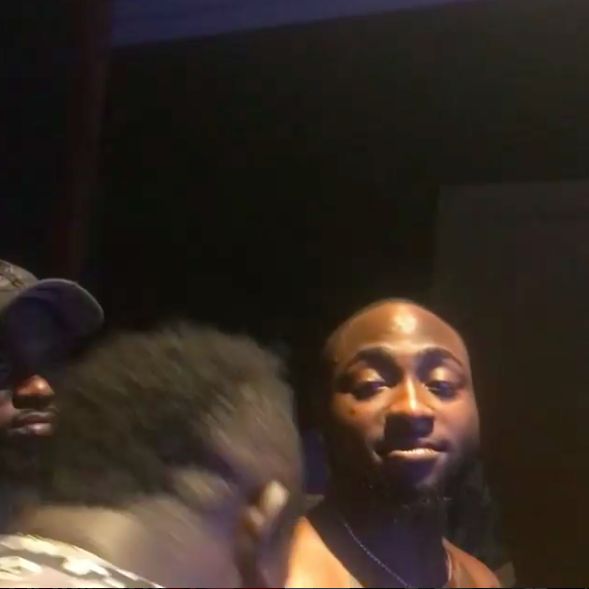 A video of Duncan Mighty and Davido is trending on social media.

In the video shared via Instagram, Duncan Mighty is filmed taking a bow (and was probably attempting to prostrate as some people claim) in a bid to show his excitement and gratitude over Davido’s collaboration with him as well as his visit Port harcourt for the video shoot.

Davido held him up and hugged him and people in the room continued to praise both of them.

Duncan Mighty attempting to prostrate for Davido is either humility at it's peak or the most hilarious thing I've seen since teletubbies. ???? pic.twitter.com/XAVR5piGV8

How i luv nigerians..Duncan Mighty prostrated b4 Davido and peopl are brandishing that yoruba adage that says 'Just because i want to eat a cow doesn't mean i shud call him Uncle'…They will lick Davido's toes for half the sum he gave to Mighty behind the scenes.

Imagine why is he thanking davido . duncan mighty is bigger than this hes even bowing . yrs its not bad to thank him. But that bowing mehn thats kind of too low. Duncan mighty music has been hits and bomb even before davido even thought of music.

Duncan Mighty 'postrates' for Davido, says the singer has elevated him, the entertainment industry in Port Harcourt, and the entire Niger Delta, after OBO featured him in a new song.

Is Duncan Mighty looking down on himself, does he really knows his worth? @TouchPH @Gidi_Traffic pic.twitter.com/OB6QaK74vW

Duncan Mighty aka Owner of a Construction Company Bigger than Julius Berger actually needed the help of the BIGGER artistes like Wizkid, Davido, Tiwa and co to re-awake his already moribund career.

Related Topics:DavidoDuncan Mighty
Up Next