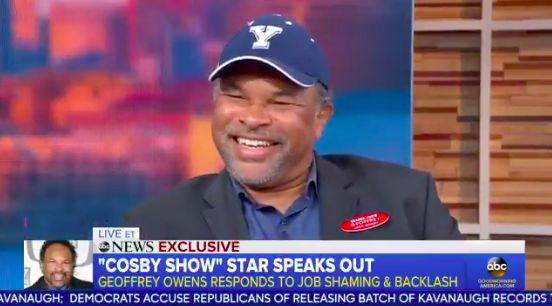 American actor and former star of The Cosby Show, Geoffrey Owens, 57 isn’t bothered about the negative comments he received after photos of him working at his job at a Trader Joe’s cash register surfaced online.

Speaking to anchor Robin Roberts, Owens reflected on the overwhelming love and support he has received.

“It’s really overwhelming in a good way. I really want to thank everybody out there: family, friends, Hollywood community and the general public for the incredible support, the amazing support and positivity that they’ve shown for me. It’s quite astounding, it’s very encouraging,” he said.

He added: “I was really devastated, but the period of devastation was so short, because so shortly after that, the responses – my wife and I started to read these responses from literally all over the world of support and so, fortunately, the shame part didn’t last very long.”

FULL INTERVIEW: @GMA EXCLUSIVE — "There's no job better than another…every job is worthwhile…" Actor Geoffrey Owens speaks out, responding to job shaming and backlash after a photo of him working at a grocery store was posted online: https://t.co/0wZJnpowI9 pic.twitter.com/aNiG5fV2yf

Owens, who has been working at the grocery store for 15 months, disclosed that he took the job because he couldn’t make ends meet.

The job offered “flexibility,” so he could “try to stay in the business,” he added.

He said: “I didn’t advertise that I was at Trader Joe’s. Not that I was ashamed of it, but because I didn’t want the entertainment community to kind of decide, ‘Well, he’s doing that, he’s not pursuing acting anymore.’ I felt like I had to be careful about that.”

He said he “wouldn’t feel comfortable getting acting jobs from this event.”

“I wouldn’t mind getting auditions, I don’t mind if people call me in to try out for things, due to what’s happened, but I actually wouldn’t feel comfortable (with) someone giving me a job because this happened. I want to get a job because I’m the right person for that job,” he added.

This business of my being this ‘Cosby’ guy who got shamed for working at Trader Joe’s, that’s going to pass… but I hope what doesn’t pass is this idea… this rethinking about what it means to work, the honor of the working person and the dignity of work. And, I hope that this period that we’re in now, where we have a heightened sensitivity about that and a re-evaluation of what it means to work, and a reevaluation of the idea that some jobs are better than others because that’s actually not true.

There is no job that’s better than another job. It might pay better, it might have better benefits, it might look better on a resume and on paper, but actually it’s not better. Every job is worthwhile and valuable, and if we have a kind of a rethinking about that because of what’s happened to me, that would be great, but no one should feel sorry for me, either from a positive or a negative perspective. I’ve had a great life, I’ve had a great career, and I’ve had a career that most actors would die for.

#GeoffreyOwens I’m about to start shootings OWN’s number one drama next week! Come join us!!! I have so much respect for people who hustle between gigs. The measure of a true artist.

#GeoffreyOwens I’m about to start shootings OWN’s number one drama next week! Come join us!!! I have so much respect for people who hustle between gigs. The measure of a true artist.