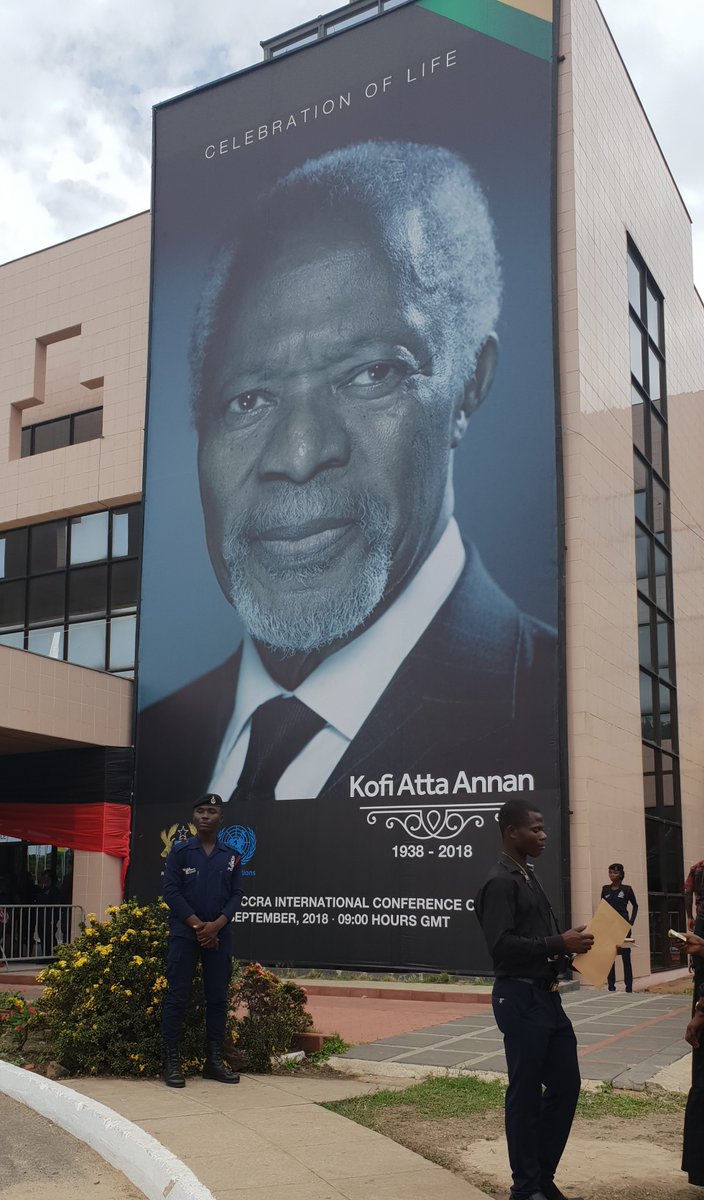 A state funeral is being held for former UN Secretary-General Kofi Annan who passed on August 18, at age 80.

His body was flown to Accra on Monday and about 6,000 people, converged at the Accra International Conference Centre to pay their last respects to the Nobel laureate.

Among the dignitaries present are current UN Secretary-General Antonio Guterres, former Ghanaian presidents, the leaders of Ivory Coast, Liberia, Namibia and Niger, and the Crown Prince of Norway.

Kofi Annan was both one-of-a-kind and one of us. He was an exceptional global leader.

He was also someone virtually anyone in the world could see themselves in: those on the far reaching of poverty or by, conflict and despair who found in him an ally; the junior UN staffers following in his footsteps; the young person to whom he said until his dying breath ‘always remember, you are never too young to lead – and we are never too old to learn.

Like few in our time, Kofi Annan would bring people together, put them at ease, and unite them towards a common goal for our common humanity.

There is an old joke: The art of diplomacy is to say nothing … especially when you are speaking! Kofi Annan could say everything, sometimes without uttering a word.

It came from the dignity and the moral conviction and the humanity that was so deep in him.

He had that gentle voice, that lilt that made people smile and think of music. But his words were tough and wise.

And sometimes the graver a situation, the lower that voice would get.We would lean in to listen. And the world would lean in. And we were rewarded by his wisdom.

"He said he grew up realising that change is possible. "That it's possible peacefully. And later on…when I joined a big bureaucracy, like the UN, you discover that the greatest impediment to change is a reatraint the bureaucrats put on themselves." Biography of @KofiAnnan pic.twitter.com/MmPQXE6BuY

"I have …lost a friend. The world has lost a standard-bearer of global cooperation. The @UN has lost an embodiment of its mission." Says @antonioguterres of @KofiAnnan #RIPKofiAnnan pic.twitter.com/84XtAdCrj7

To Kofi Annan, indifference was the world’s worst poison.
Even after finishing his term as Secretary-General, he never stopped battling on the front-lines of diplomacy, @antonioguterres at memorial service for Kofi Annan. #RIPKofiAnnan pic.twitter.com/HefcI5Rafx

Barbara Hendricks delivers a very moving rendition of We Shall Overcome at the state funeral for former Secretary-General Kofi Annan. #RIPKofiAnnan pic.twitter.com/7SAWw1V9oA