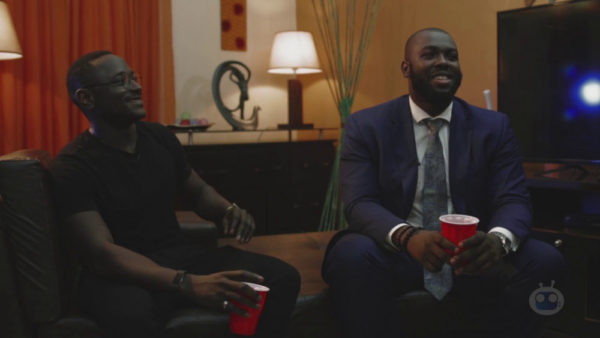 Odd name, isn’t it? Sounds almost mutually exclusive. Who in the world are geeks fed in bukas.

Well, if you’re confused, you’re not the only one. So are a host of others.

Well, we kinda know, thanks to director Victor Sanchez Aghahowa, who has shared the manifesto with us. Still, it’s fun to see everyone else get it wrong.

To make things clear, put you in the know, so that you too won’t be left confused like these guys, read the BukaFedGeeks Manifesto, and a short press release.

Thank you for taking the time to read this. My name is Victor Sanchez Aghahowa. I’m a TV showrunner, screenwriter, director and producer. I live and work in Nigeria.

I’ve worked on over a thousand episodes of TV (yikes!), and I still work in TV, but then I got together with a bunch of friends, some strangers – and a few strange friends to create a platform we are calling BUKAFEDGEEKS.

It’s more than just a YouTube channel (which is home to some zany web shows, scripted and otherwise which are produced by a bunch of Nigerian geeks with a deep abiding love for storytelling – and street food.)

It is a movement.

It is a gathering point for the in-betweeners. The ‘others’. The ‘New Africans’.

Those that jam Tchaikovsky in a ‘keke marwa’, that discuss the MCU in a buka, that wear Prada to an ‘owambe’. That skateboard in Enugu and play Ultimate Frisbee in Borno. Those that use Google Maps in the village and drink agbo to fight malaria in the penthouse suite.

Those of us that are – us

Don’t say that’s not a word. We just made it up and that’s how words happen.

Somebody makes them up.

And that’s what we do – make things up. Things that are as real to us as the world we live in, and so we yearn to make communities around these invented worlds.

Communities so passionate, so loyal, so positive, so freaking awesome that they spill out of the screen and affect the communities that we live in.

You’re already awesome on your own. Imagine what will happen when we communitize.

And the press release…

Following a decade and a half of creating, writing, directing and producing some of the most iconic shows on Nigerian TV (including EbonyLife TV’s ‘Dowry’ and Africa Magic’s ‘Hotel Majestic’, ‘Hush’ and ‘Jemeji’) acclaimed showrunner Victor Sanchez Aghahowa and his production company TatafoHQ are launching the YouTube channel ‘BukaFedGeeks’ on December 24th 2018.

In 2012, TatafoHQ had released the web series ‘How She Left My Brother’, which was the first web series from Nigeria to run a full season. After a six-year hiatus from the platform while they focused on TV, the company returns to the medium where they started.

The channel is releasing several seasons of several shows, pledging to release a minimum of one video a week throughout 2019. Premiering first is the show ‘Flat 3B:Stuck(ed)’.

‘Flat 3B’ is a three-part anthology series about a short-term lease flat with a rather sinister reputation, which negatively affects every tenant unlucky enough to rent the flat. Season One of Flat 3B titled ‘Stuck(ed)’ features Linda Ejiofor as a party goer who wakes up in Flat 3B hung-over with no recollection of how she got there and Mawuli Gavor as the handsome hunk who wakes her up with breakfast, a smile and unclear intentions…

Also slated on the channel (among other shows) is ‘Man Of Her Dreams’ a comedy starring Sonia Irabor, Folu Storms, Eso Dike, Rekiya Atta among others, which is slated to run its first 10 episode season on a daily release schedule.

‘BukaFedGeeks’ aims to become a frequent destination for anyone seeking quality Nigerian entertainment of international quality with a homegrown twist.

The channel can be subscribed to at www.youtube.com/bukafedgeeks