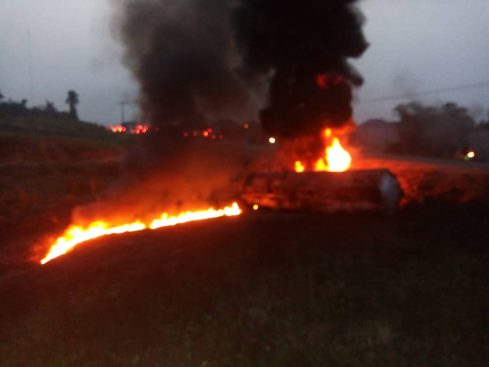 Multiple reports claim dozens of persons have been burnt to death following a petroleum tanker explosion in Cross River state.

Daily Trust reports that the tanker which was loaded with petroleum products fell along the Odukpani axis of the Ikom-Dalabar highway near the Federal Housing Estate.

Daily Trust quotes an eyewitness as saying that people were seen running to the scene with gallons and other containers to scoop fuel when the tanker veered off the road into a ditch on the roadside.

“We have recovered 12 corpses and taken 22 persons with serious burns to hospital,” police spokeswoman Irene Ugbo told The Associated Press.

Speaking to AP, a resident Richard Johnson said: “The police only recovered a few corpses, many of the other dead were burnt to ashes.”

Johnson said that the blast may have been caused by a generator that was brought to the scene of the accident to help pump out the fuel.

Johnson adds that about 60 persons were inside a pit scooping fuel when the explosion occurred, adding that it is unlikely for anyone inside the pit to survive “as there was a lot of fuel in the pit.”

I saw  people  running to the scene with gallons and other containers to scoop fuel  after the tanker veered off the road into a ditch by the roadside.

Police officers from Odukpani Division also tried to cordon-off the area but the people refused and continued to scoop fuel. The rest is now history as the tanker burst into flames and engulfed all the people near and within the radius that the product had spread to.

Let me be modest, the people scooping that fuel will not be less than 60 to 70 people because it was like a market place.