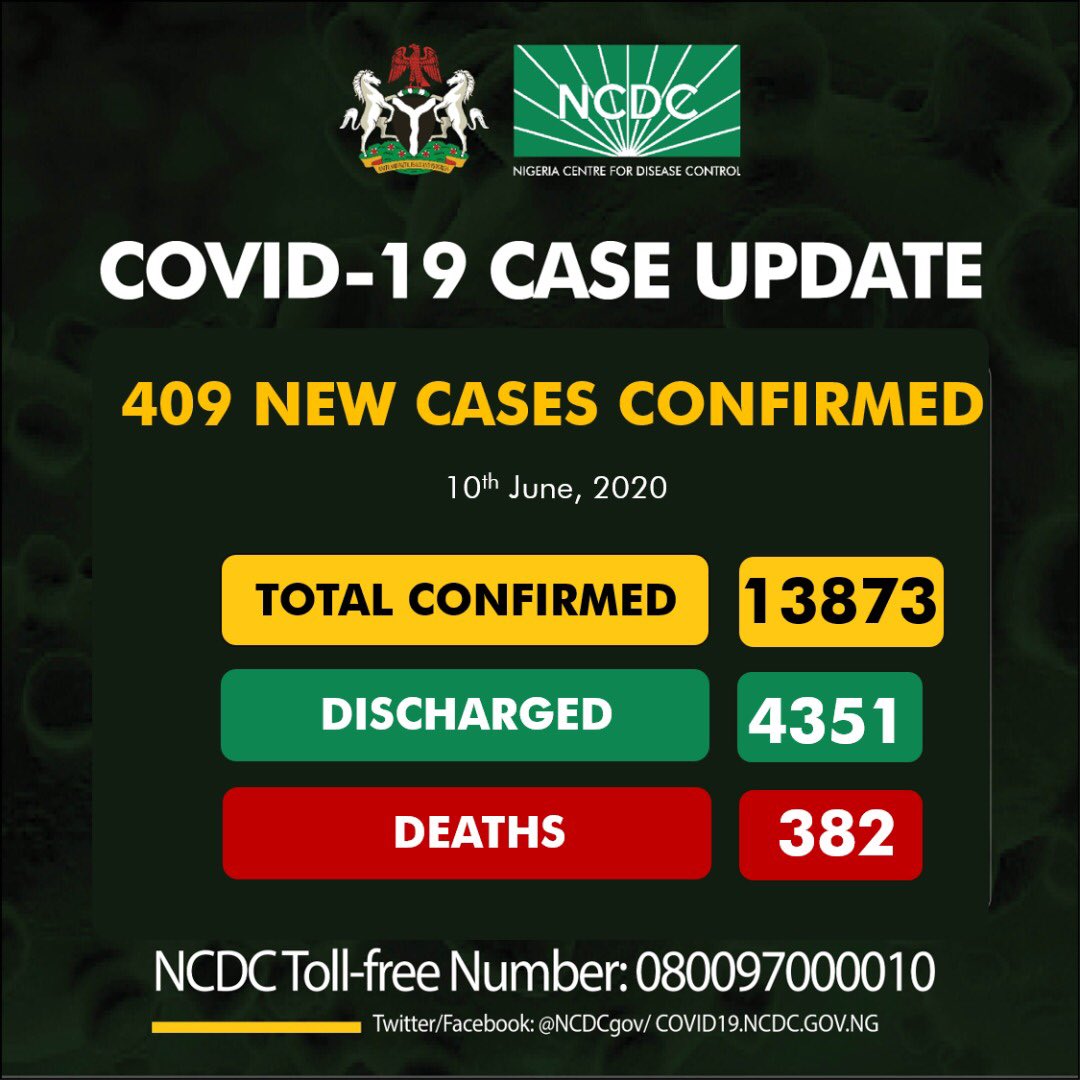 Lagos State has recorded 201 new cases of coronavirus, making the total number of confirmed infections in the state rise to 6266. According to the Nigeria Centre for Disease Control (NCDC), Nigeria’s confirmed cases of the virus have risen to 13,873 after 409 new infections were recorded in the country on Sunday.

A breakdown of cases by state can be found via https://t.co/zQrpNeOfet#TakeResponsibility pic.twitter.com/KEsejLktzm

Bauchi State Deputy Governor, Baba Tela, who tested positive for coronavirus about a week ago, has tested negative for the virus and was discharged, Channels News reports.

Executive Chairman, Bauchi State Primary Healthcare Development Agency (BASPHCDA), Rilwanu Mohammed stated this in a press briefing. The deputy governor, who is also the chairman of the State Task Force on COVID-19 and Lassa Fever, went into isolation so also did the people he had contact with.

The BASPHCDA executive chairman said the deputy governor was isolated for nine days.

“The deputy governor of Bauchi State, nine days ago was in isolation because he was infected. However, we thank God that after another test, he is now negative and he has been discharged,” Mohammed said. 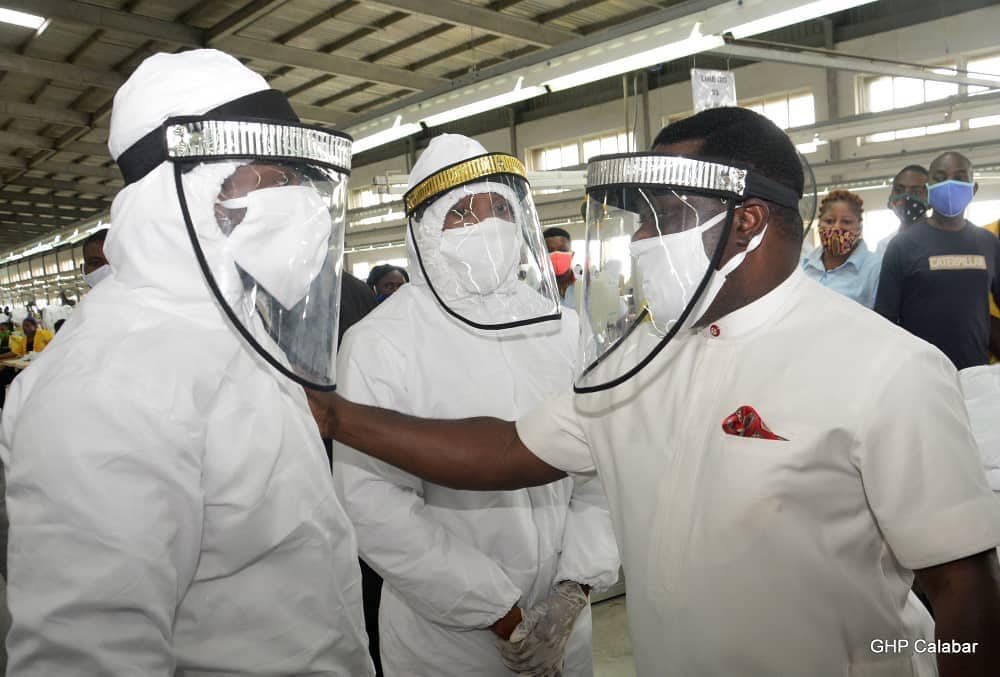 Governor Ben Ayade has directed the mass production of Personal Protection Equipment (PPE) for the trial resumption of public schools. He said the protective gears which include face shields and PPE overalls, will be deployed to schools free of charge for the use of students and medical personnel in the state.

A statement on the official Instagram page of the governor reads:

I was at the Cross River Garment Factory to inspect the production of PPE’s. This became important because our Dr’s and Nurses who are at the forefront of the fight against covid19 are at risk and Government must do something to support them. Also mass production of face shields have begun for our school children so that they can go back to school observing necessary covid 19 protocols.

And so for Cross River State we have a strong commitment that our children cannot continue to stay at home, the more they stay, the more the moral decadence the more indiscipline the more they become lazy.
Therefore the supply of this nose masks and face shield in the first Instance will be free to public schools because we are only resuming in phases. But for the health workers in Cross River State this will be provided at no cost because the Government has borne the cost and will supply the full kiting of medical personel from our primary health centres to our secondary to our tertiary health centres in the state. 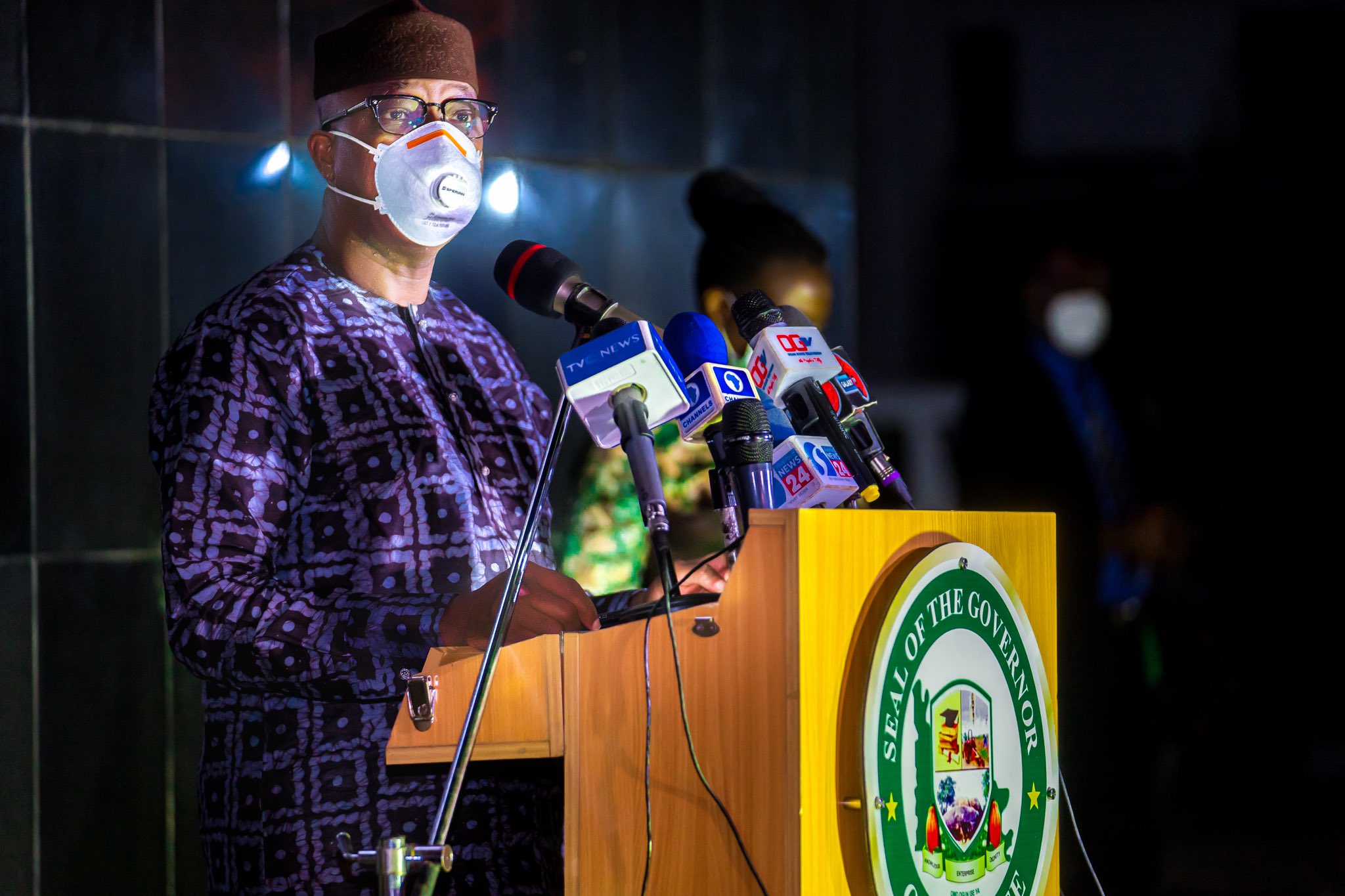 The Ogun state government has asked residents to remain calm in the wake of a spike in positive cases of coronavirus recorded in the state. Ogun State on Tuesday recorded 108 cases of COVID-19, which is the highest in a single day since the index case on the 27th, February 2020.

The Commissioner for Health, Tomi Coker, in a press statement, said the spike was a consequence of increased population sampling and increased testing capacity to 600 daily. Coker also said that the majority of the positive cases are asymptomatic, noting that the government is addressing this surge appropriately.

Coker emphasized the need for people to focus on the outcome of the cases, which has been favourable for the State adding that, more patients are being discharged while only 13 fatalities, about 3% of the total confirmed cases, have been recorded so far.

She noted that about 97% of cases in the State would fall into asymptomatic and mildly symptomatic, calling on residents to continue to act responsibly by observing all necessary precautions such as social distancing. “We are extremely fortunate with the outcomes of the cases so far. We have low mortality and many of the cases are asymptomatic. Also, we have discharged 202 patients as of today. That’s close to half of the total of the confirmed cases so far. Our government is continuously learning more about the pattern of Covid-19 in our communities”.

“This has informed our decision in the process of defining our new norm. This explains why we have decentralized our sample collection and integrated it into health facilities within the communities as well as commencing community-based management of Covid-19 going forward,” she said. 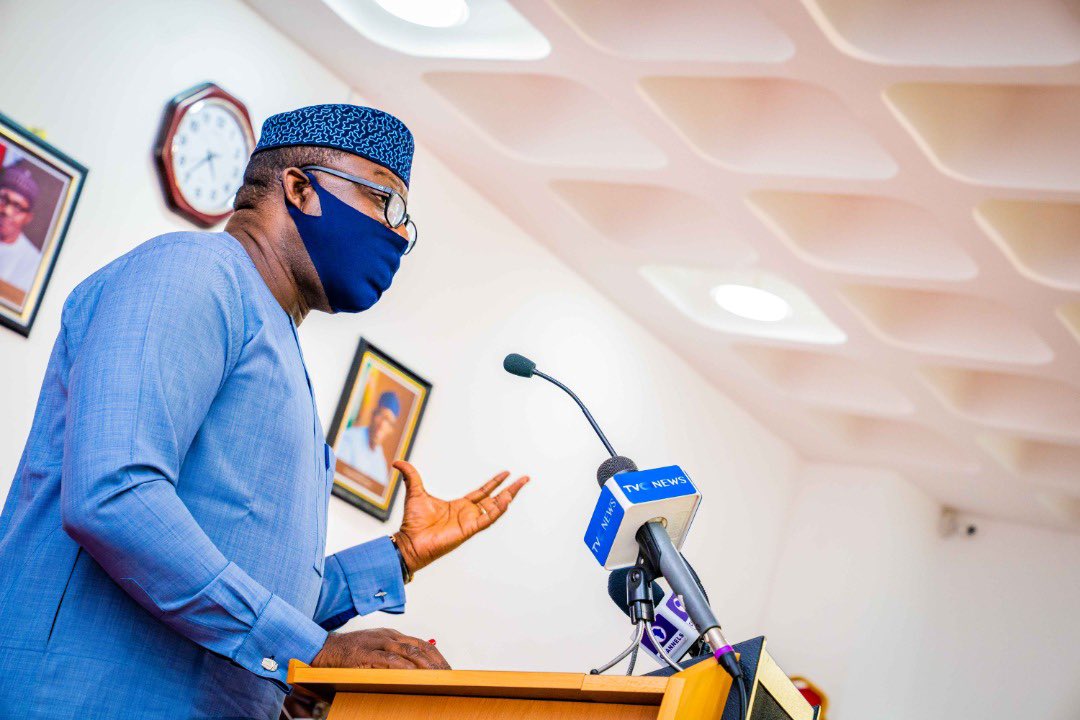 Ekiti State Government has maintained that the ban of mosques, churches, and other public places in the state is still effective.

The attention of @ekitistategov has been drawn to the apparent disregard by some residents for the Executive Order 7 directive, banning public gatherings larger than 20 persons, be it social or political.

Members of the public are urged to take note that though movement and business activities are allowed from Monday to Friday, the ban on large gatherings is still in force in the State. Dusk to dawn curfew, inter-state travel, and the ban on social events like birthday parties, religious gatherings, festivals, political party meetings or rallies, as well as other forms of the gathering of more than 20 persons, have not been lifted in Ekiti State.

Residents are also advised to take personal responsibility for their protection while going about their daily duties, by observing preventive measures of washing of hands frequently with soap under running water, wearing face masks, and maintaining social distancing.

Anyone who violates the Executive Order will be prosecuted, as Government is committed to curtailing the spread of #COVID19 and keeping Ekiti State safe and healthy.

Members of the public are urged to take note that though movement and business activities are allowed from Monday to Friday, the ban on large gatherings is still in force in the State.

Residents are also advised to take personal responsibility for their protection while going about their daily duties, by observing preventive measures of washing of hands frequently with soap under running water, wearing face masks, and maintaining social distancing.

Anyone who violates the Executive Order will be prosecuted, as Government is committed to curtailing the spread of #COVID19 and keeping Ekiti State safe and healthy. 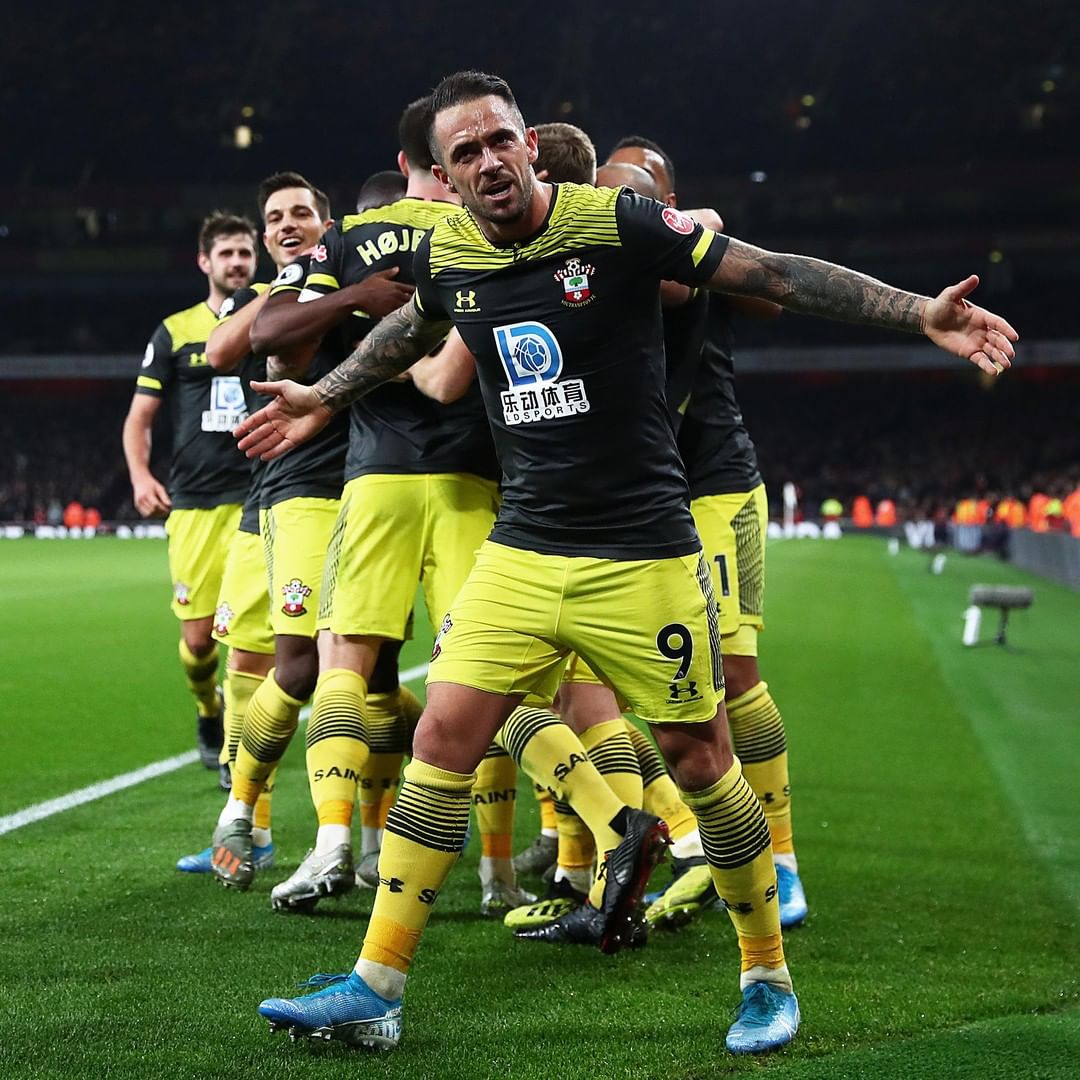 Ahead of Premier League restart, one positive coronavirus case has been confirmed from Tottenham for the latest round of Premier League testing. A total of 1,213 tests were carried out among players and club staff on Monday and Tuesday.

The Premier League can today confirm that on Monday 8 June and Tuesday 9 June, 1,213 players and club staff were tested for COVID-19. Of these, one has tested positive.

The last COVID-19 patient in Laos has recovered from the disease and was discharged from hospital in Vientiane on Tuesday. The patient was permitted to return home on Tuesday after being tested negative for the virus in the second round of testing, Xinhua reports

The Center of Information and Education for Health under the Lao Ministry of Health disclosed this in a press release. The patient is an 18-year-old man living in Lao capital Vientiane, who was confirmed as the country’s eighth case of COVID-19. He was treated in the government-designated Mittaphab Hospital (Hospital 150) since March 28. 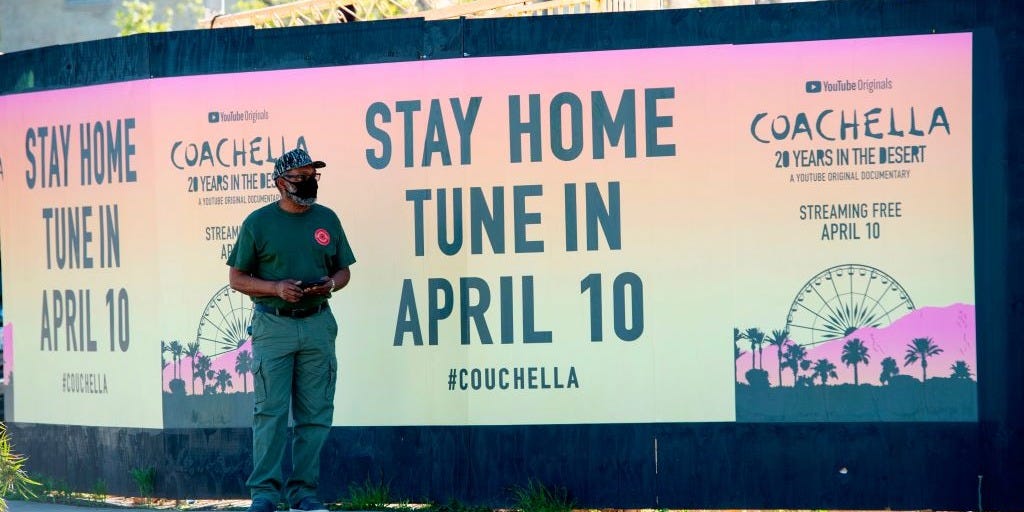 Coachella and Stagecoach are officially cancelled

The annual Coachella and Stagecoach festivals, two of the largest music events held in Southern California, have been cancelled over concerns about coronavirus spread, CNN reports.

Announcing the cancellation, Cameron Kaiser, the public health officer for Riverside County, said in a statement that, “I am concerned as indications grow that COVID-19 could worsen in the fall. Given the projected circumstances and potential, I would not be comfortable moving forward.”.

The Coachella Valley Music and Arts Festival and Stagecoach Country Music Festival were originally scheduled to be held in April but were postponed until October under the direction of Riverside County health officials.

How the NBC Broadcast Code will Affect Content Creators in Nigeria