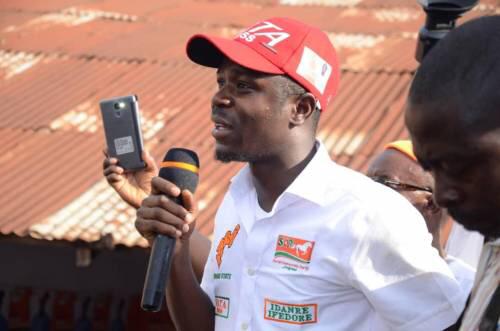 Tajudeen Adeyemi Adefisoye, a 35-year old candidate of the Social Democratic Party (SDP) has been declared winner of the Idanre/Ifedore Federal Constituency seat.

Akinmade, a former Commissioner in the state, polled 14,191 votes.

According to Sahara Reporters, Small Alhaji, speaking on his victory, said:

It brings me boundless joy to know that our party, the Social Democratic Party (SDP), attained victory not only in Idanre my very local government, but also won handsomely in Ifedore local government.

There was no way this victory could have been possible without the relentless and uncompromising commitment of our supporters.

I say a big thank you from my heart for not only ensuring our victory at the polls, but your eternal vigilance up to the collation centres, which did not allow our victory to be stolen, is equally very much commendable.

Let me reiterate once again that this victory is not only for Tajudeen Adeyemi Adefisoye ‘Small Alhaji’, but for everyone that has contributed in one way or the other to this overall electoral success.

As a follow up to the official declaration of Alhaji Tajudeen Adefisoye by INEC as a member, House of Representatives elected for Idanre/Ifedore Federal Constituency by INEC, you can be assured of mild merriments to celebrate our collective victory.

Once again, my most profound appreciation to everyone that has given us reasons to celebrate. Our teeming supporters have proven to be vital shoulders that never allowed my clothing to fall off.

Omosede Igbinedion loses House of Reps Seat, says “this was a stolen mandate”