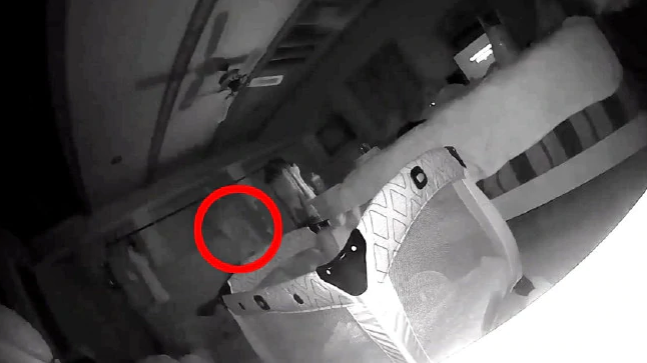 A family in Highland Michigan believes their house is haunted and what’s even more disturbing is that whatever is haunting the home is doing harm to their little girl, Lily Higgins.

According to People, Joshua Higgins and Heather Brough said they believe their home is haunted after their cctv captured a figure which they believe to be a ghost wandering around their daughter’s crib.

The couple, who decided to check the cam after finding scratches on Lily’s face, said their daughter always acts like she sees something that they don’t.

Seeing Lily’s face with the scratches was so bizarre and frightening. I was crying, ‘What happened to you?’ I grabbed her jacket and ran over to my mother-in-law’s house. Nobody knew what happened. We wondered if she’d scratched herself, but when we put her hands up to the scratches it did not match up.

It scares us that it could do something else. I mean, there was a morning I woke up and I felt like someone’s hands were around my neck.

Joshua’s mother, Kris, who owns the guest house they live in, said paranormal activities had been determined to exist in her home but she does not know what caused it in the guest home.

“This is a spirit. I don’t know what its intentions are, but at this point it’s becoming physically harmful,” Heather said.

The family are staying in a room together at the home until they have enough money to move out.