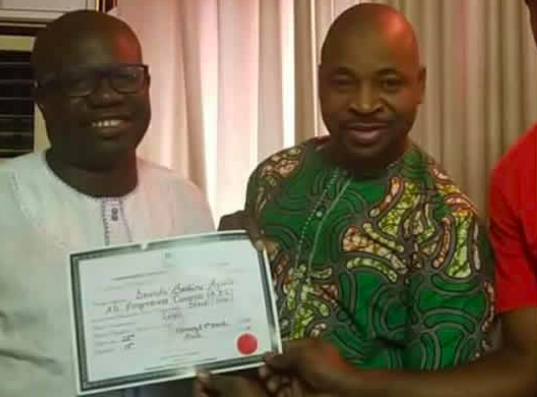 The Treasurer of the National Union of Road Transport Workers (Lagos Branch), Musiliu Akinsanya, popularly known as MC Oluomo is trending on Twitter and that’s because a rep-elect, Dr. Bashiru Dawodu visited him with his Certificate of Return.

Dawodu, a medical doctor who contested under the APC for the Oshodi/Isolo Federal Constituency 1 election, visited Oluomo to thank him for his role in his election.

In his response, Oluomo, according to Punch, said: “May be after this, we will be going to the Senate by God’s grace”.

Dawodu bagged his medical degree from the University of Lagos and was once based in Camilla, Georgia, US, where he worked as a paediatrician.

See of the comments below:

This guy is a US based doctor (https://t.co/cPiUbXjrAz). Returns to Nigeria, wins an election and the first person he goes to pay homage to is MC Oluomo. Shout out to Bola Tinubu for his visionary leadership of the Yorubas pic.twitter.com/6YUo1o2utn

Eventually, we will all be here when MC Oluomo becomes a senator in this country. He'll probably use Oluremi's slot, when she's tired.

And somehow, people in the SW still think they are the smartest in the country lol. https://t.co/mFAZytJsJk

I see another Dictator grooming, MC Oluomo will one day rule Lagos. https://t.co/FLXS9ZUFli

Is it u he shud come n see? Stay there with iver bloated ego. Politics is local. Come on ground to provide the people better alternative. Writing english and wearing suit on ur avi cant achieve that. Come on ground….

But no surprise here na, someone who’s name no one knows, doesn’t live in his constituency, probably didn’t even campaign – wins an election. Wisdom should tell him no be by him power

It is bcs u are not a politician,. There is nothing special abt where u based or what ur profession is,once u are in politics u play according to the rule..
MC is a US citizen as well and he supported the Dr to be elected and it is good to say thank you to those who support you.

One day the same intellectuals who supported Tinubu's bad behaviour will then ask how Lagos ended up being captured by MC Oluomo…. https://t.co/f998pbwzvy