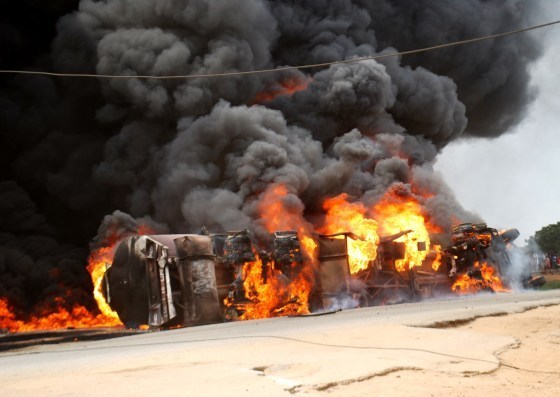 The Ibadan Police Command has said two persons died in a petrol tanker explosion on Thursday at Sawmill/Onipepeye area of the Ibadan-Lagos Expressway.

One witness told Premium Times that the tanker fell at about 2pm while trying to overtake a car.

“After the petrol tanker fell, some persons went there trying to scoop petrol before the tanker exploded,” the witness who identified himself as Saheed said.

At least two people have been confirmed dead in the incident. The accident happened around 2 p.m, but it was around 2:45 pm before firefighters came.

After the tanker fell, people were supposed to run but some decided to move closer and while trying to scoop petrol, the tanker exploded.

One eyewitness told Premium Times that “seven okada and eight other vehicles were affected.”

A social media user had called the attend alerted authorities about the impending explosion before it eventually went up in flames.

This is a disaster waiting to happen around Iwo road Ibadan, this petrol tanker is about to explode.

Some guys are going there to get petrol please inform the appropriate authority.

– Video : Many lives lost at the moment, as petrol tanker falls in Ibadan,Oyo state.pic.twitter.com/pcOxJUGbvq

Related Topics:IbadanTanker Explosion
Up Next