Benita & Elozonam are the latest Housemates on #BBNaija Day 30

The Business Of Friendship

Jackye and Khafi felt it was time to clear the air between them.

In the early hours of the morning, Khafi and Jackye had a lengthy conversation in the kitchen on the events of Saturday Night after-party during the Gedoni and Mercy’s quarrel.

“You stood up and told me you didn’t want to hear it, that for me, was like telling me to shut up.”- Jackye

“I don’t want to have this conversation – doesn’t mean telling you to shut up.”- Khafi 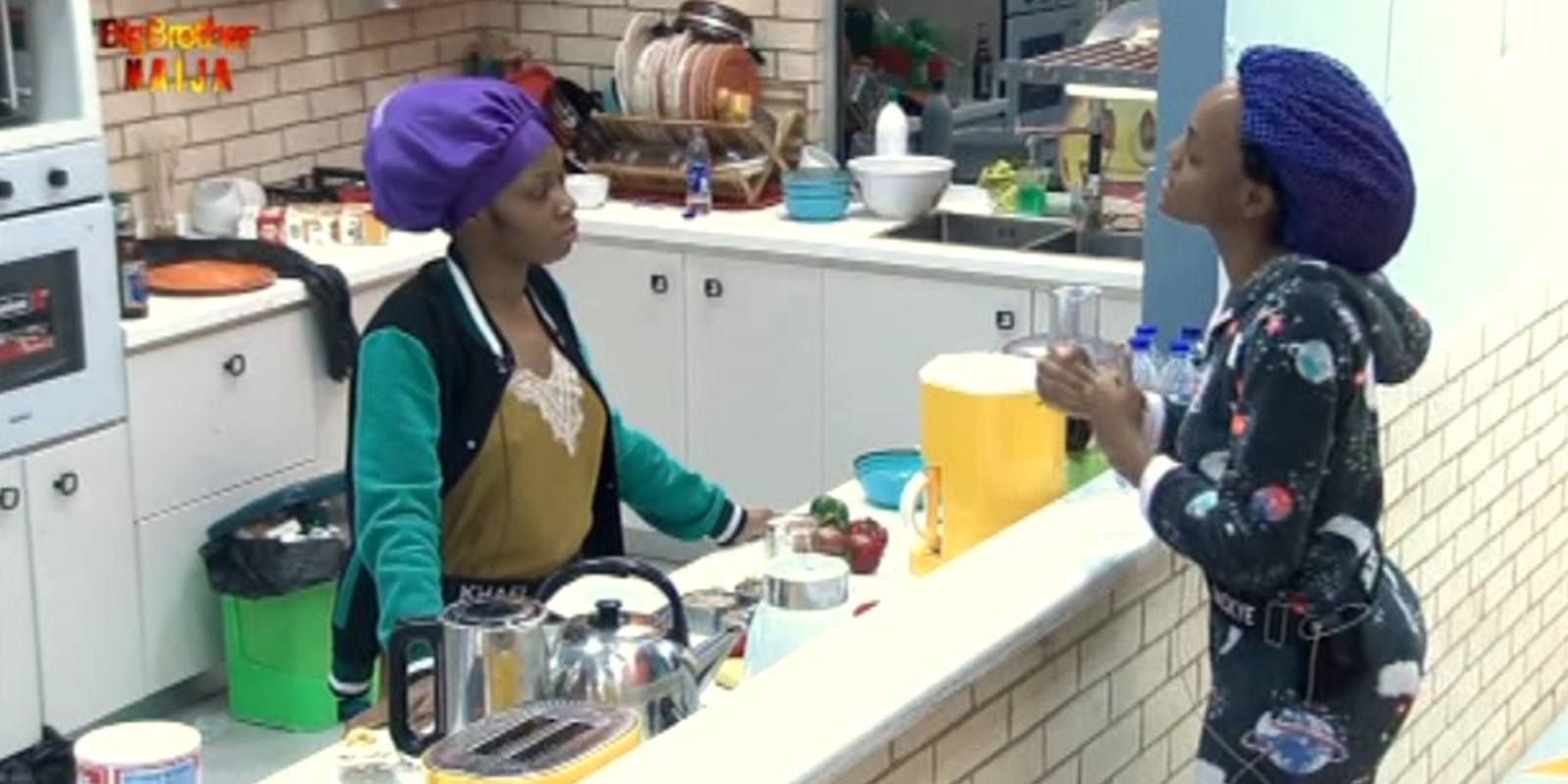 On Saturday Night after their party, Jackye played the role of peacemaker as she shuffled between camp Mercy and camp Gedoni. However, her attempts to prevent the parties from talking to each other so as not to increase sparks rubbed off on Khafi in the wrong way.

According to Jackye, her intention was to give Khafi a clearer picture of events since she was the woman close to Gedoni’s heart at the moment. But Khafi didn’t want to be involved in any whisperings as responded with, “I just wanted to hear it fresh from their mouths, to hear what happened from both sides.” Do we blame Khafi for taking this decision? A girl was only protecting herself from any dem say, dem say gist before it lands her into trouble in the Pepper Dem House.

While the pair were resolving their friendship issues, two things caught our eyes. First was Gedoni who passed by without glancing at them and second was Tacha who ignored them when she came to the kitchen. From the look of things, it seemed like Tacha and Gedoni didn’t want to be caught in Khafi and Jackye complex dialogue and so they observed from afar. These ones staying on their lane was a wise decision because, in Biggie’s House, anything can happen.

After an extended chat, Khafi and Jackye resolved the matter by exchanging high five and agreeing that they are good. Honestly, we hope this matter remains settled. 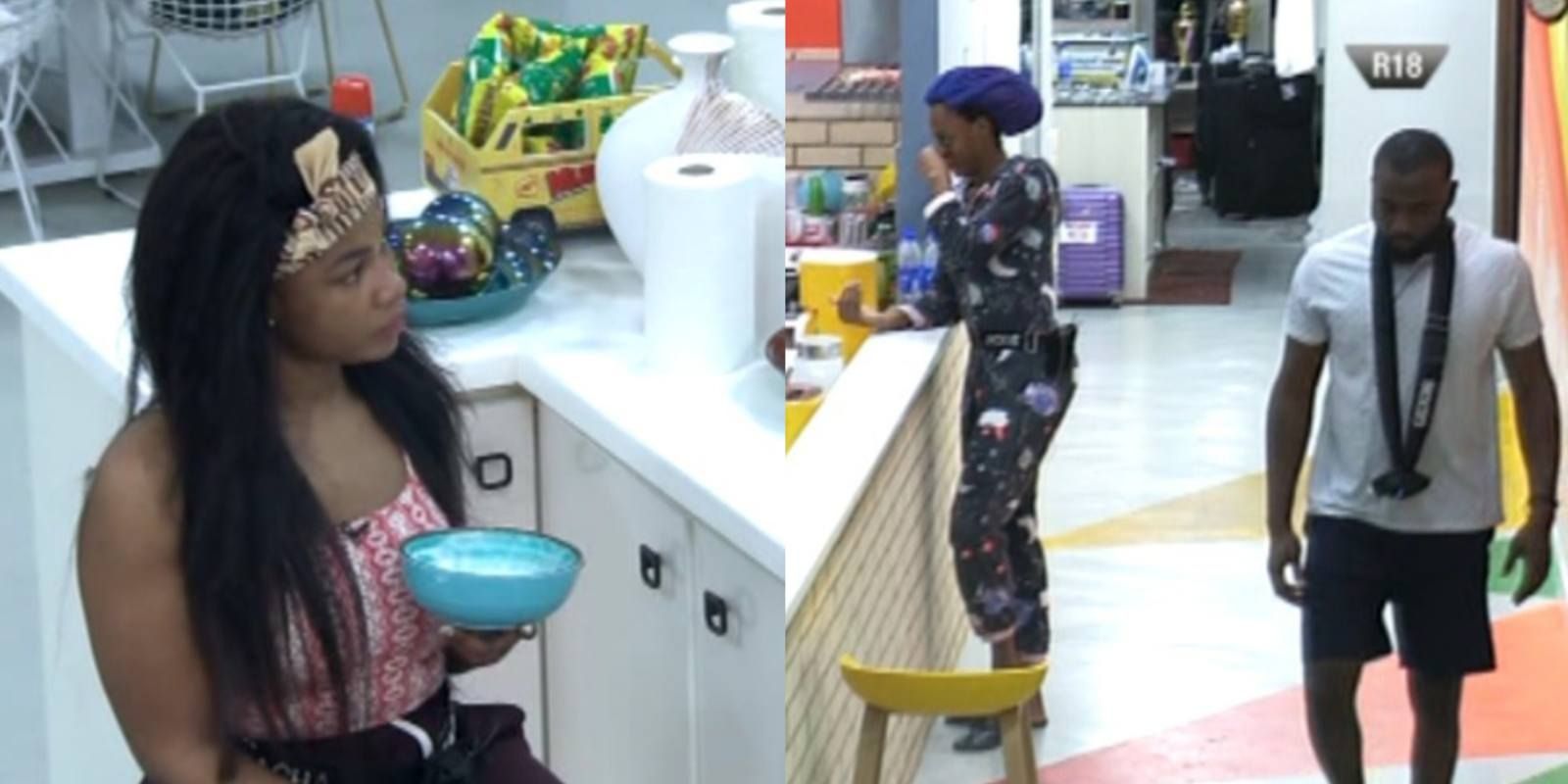 Where Lies The Loyalty?

While we’re on the subject of the business of friendship in the Pepper Dem House, we can’t help but talk about the bond between Ike and Mercy. Last night, Ike couldn’t quite understand why the Housemates kept putting Mike up for possible Eviction – yesterday being the second time in a row. In his words, “they don’t deserve your niceness, change it for them”. To which Mike replied that he would rather just remain himself and stay true to his character”.

We understand where Ike’s pain might be coming from considering their bond but in the Pepper Dem House, there’s no space for loyalty.

In line with going back in time, the Pepper Dem gang were Tasked to divide the House into three teams – with each team creating a fictitious love story set in the 50s era.
Remember when they were challenged to write love letters to a love-interest? Well, this time, Biggie asked them to have their love stories typed out using typewriters. Talk about going back in time! 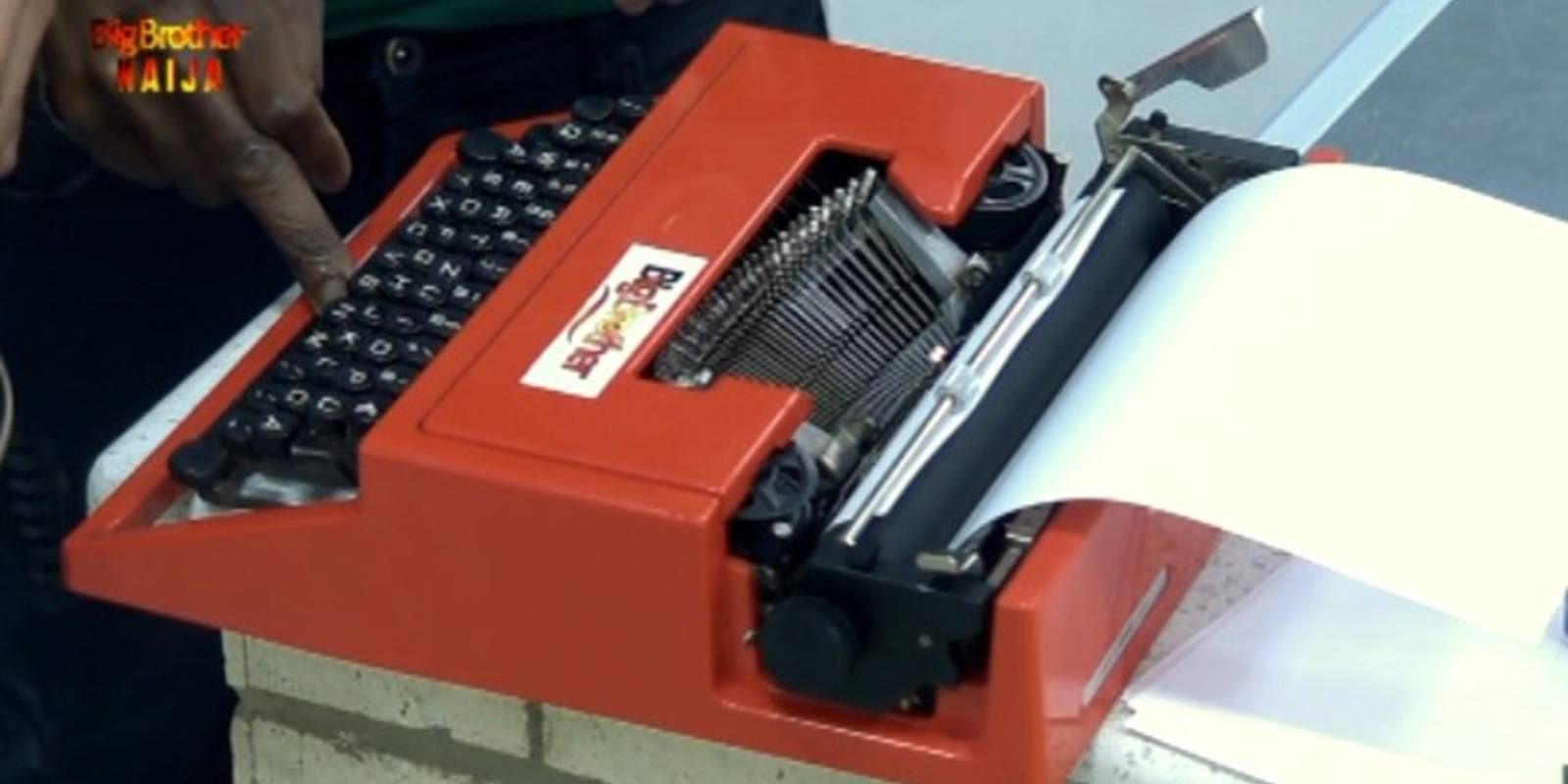 Team A – Sir Dee, Tacha, Khafi, Frodd, Seyi; Team B – Jeff, Oma, Mike, Esther, Mercy and Team C – Ike, Diane, Gedoni, Jackye. With fourteen of them participating in this Task, we just might have a Romeo and Juliet story waiting to be typed out.

The three teams worked tactically as they prepared to nail their Task presentation; one love story at a time. While some teams got their inspiration from the famous Great Gatsby movie, others shared personal stories that could be infused in the group work.

For 100 Bet9ja Coins, every story is a love story. We can’t wait to see the winning team and more importantly, we can’t wait to read the content of their love in the 50’s letters.

Watch Frodd read out the Task

“Keeping It or Keeping Me”

Speaking of love, following Esther’s missing Coins on Saturday Night, we finally got to know who the bandits were – our very own Icy pair. Interestingly, they were able to keep the Coins missing for what may seem like a long time to the assistant bandit – Mercy.

She woke up this morning with a frown on her face which later revealed that her anger was built from Ike’s refusal to return Esther’s stolen Coins.

Initially, we were not quite sure why the Coins were stolen in the first place – to revenge on Frodd’s behalf or to simply teach her a lesson. However, in their conversation today, Ike tried convincing Mercy to allow them to keep the Coins for the rainy days ahead. Well, the game is the game. 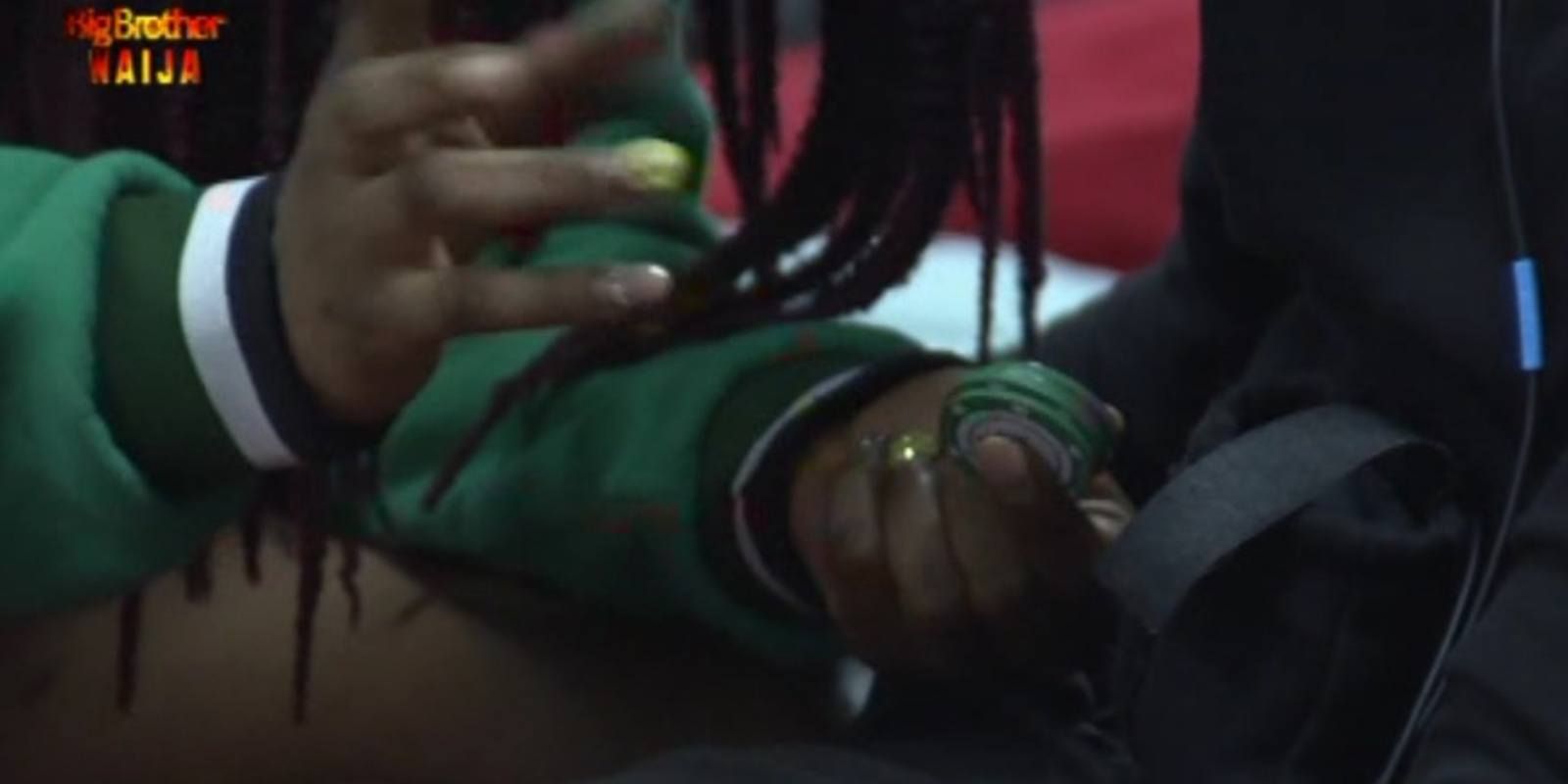 The pair sealed their conversation with what may seem like the first break up in the Pepper Dem House with Mercy leaving the room with tears rolling down her cheeks and break up words on her lips.

While the House is preparing for a love Task ahead, the Icy pair are experiencing a love turmoil. The irony! 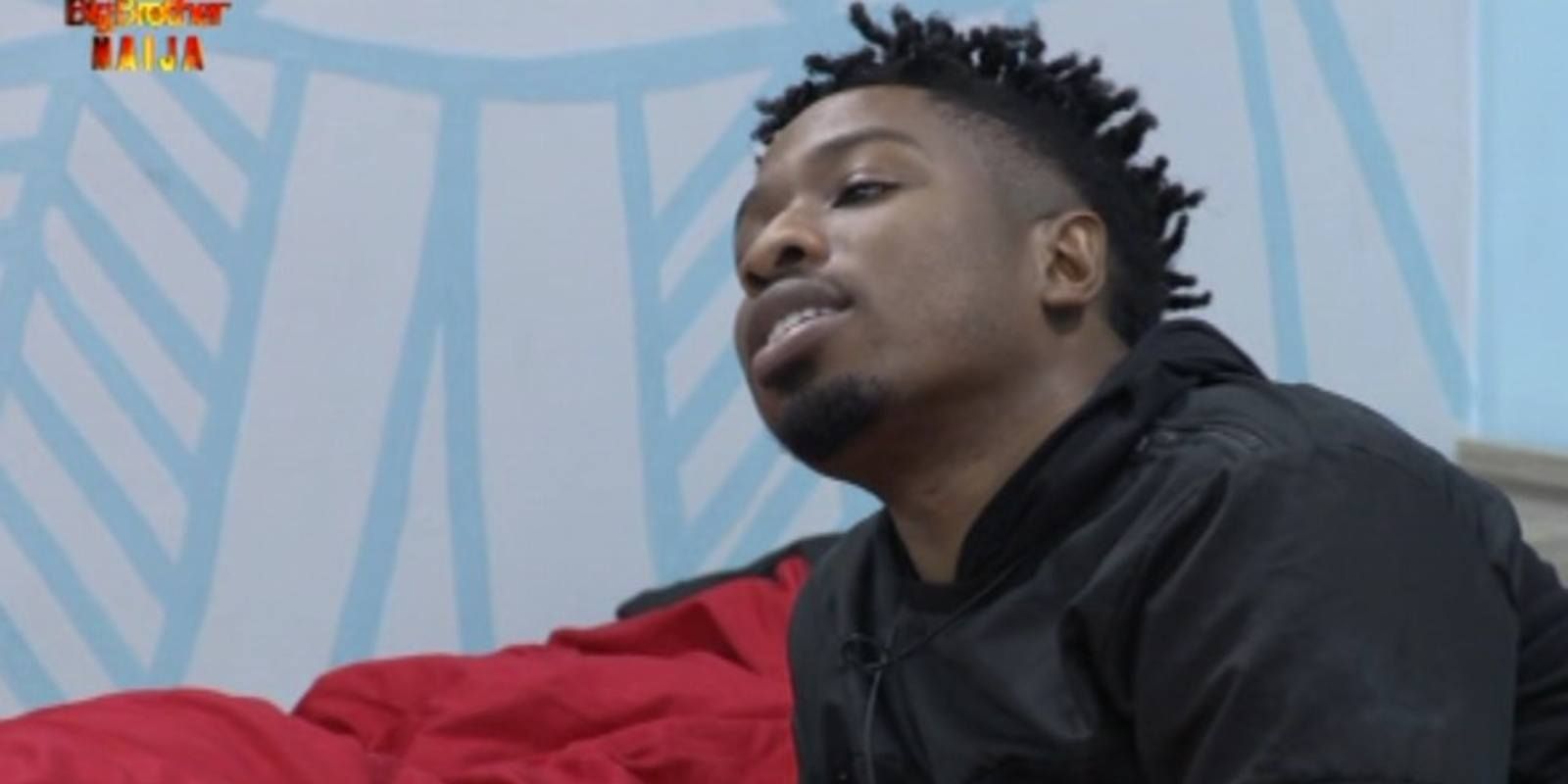 Could this be the end of our first Pepper Dem couple in Biggie’s House? What next?

Meet the Newest Members of the Pepper Dem Gang

The #BBNaijaTwist is set to shake the House up with the entrant of two new Housemates. Venita and Elozonam are the latest additions to the Pepper Dem Gang.

Venita, 32, is a new Housemate to make her way into the House. The actress from Delta describes her personality as big and promises to bring a blend of confusion, fun, heat and drama to the Pepper Dem House.

Elozonam is the second Housemate and he describes himself as very goofy and playful and plans to bring that side of him to the House.

With these two new Housemates, nothing is ever going to be the same again.

Thoughts On The New Housemates

The Pepper Dem Gang have to make room for two more Housemates. How do they feel about this?

Omashola was clearly the most enthusiastic and animated of all the Housemates about Venita’s presence in the House. From the moment Venita stepped into the House, he was infatuated by her. He couldn’t even hide it during the Diary Session as he declared his affection for her and how he wasn’t going to pass up on this opportunity to find love. He appears to have learnt from the mistake he made the last time that saw him missing out on a likely love interest in the House. How long before he shoots his shot? 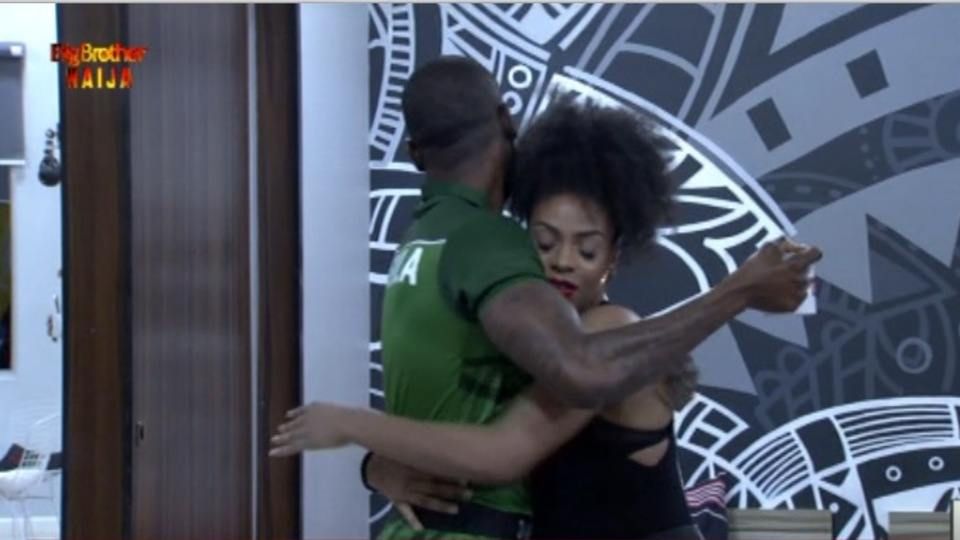 Jeff, Mike, Esther, Khafi and Tacha appeared unconcerned after the entrance of the first Housemate, but the guys ended up giving a rousing welcome to Elozonam as he stepped in. Esther made it known during her Diary Session that she wasn’t exactly happy about the new Housemates. Probably they used up all the enthusiasm they had left to welcome Seyi and Tacha back or just maybe, the last thing they needed was more Housemates.

Jackye, Khafi, Diane and Mercy didn’t look entirely too pleased to see the new Housemates as they remained in the garden focused on their work. They did send a loud message as none of them helped with the new Housemates luggage. Mercy expressed surprise and a bit of displeasure at the presence of the new Housemates. “We’ve been through thick and thin and they appear out of nowhere… I want people to leave and not come back,” Mercy said. Diane on her part is scared having them around especially as she perceives they have an edge over her.

The Housemates weren’t the only one with reactions, the internet went nuts over the new addition to the Pepper Dem Gang.  Quite a lot of fans are ecstatic about the new arrivals. Like brand new clothes that you can’t wait to try on, the fans can’t wait to see what the new Housemates are bringing to the table.

Watch the Housemates Share Their Thoughts on the New Members