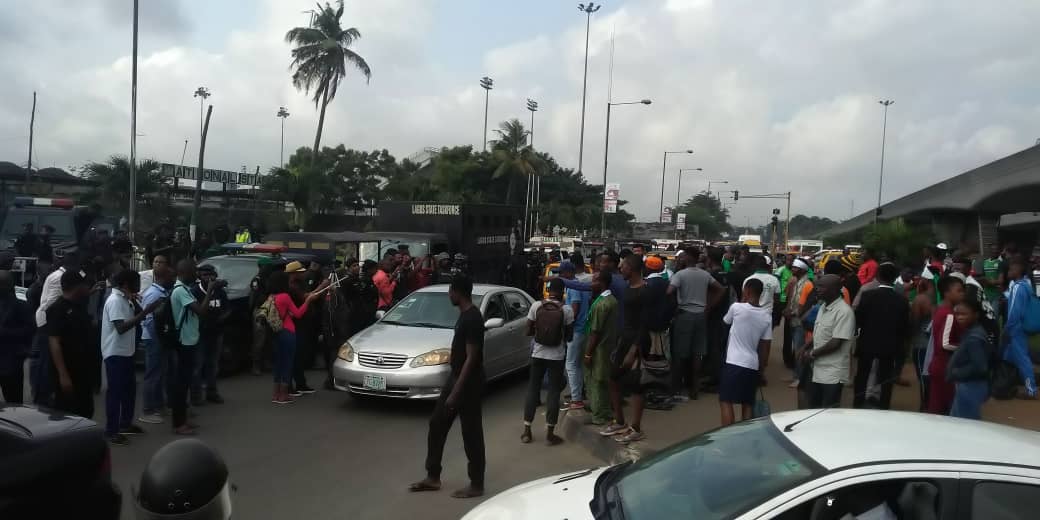 The Cable reports that members of the #RevolutionNow movement who converged on the National Stadium, Surulere, Lagos, on Monday, were allegedly forcefully dispersed by soldiers and policemen, with some arrested.

The protesters, who arrived at the stadium around 7am on Monday, for the kick-off of the protest met a detachment of policemen at the entrance of the stadium. Some soldiers later joined the policemen.

Videos and photos that has spread on social media shows Policemen whisking away alleged protesters into vans. See below:

They have started arresting and harassing media guys too #RevolutionIsNow #RevolutionNow pic.twitter.com/TtJ3EnxOZr

All because of a peaceful protest. Police said the Guy’s mouth is sharp!. They even fired tear gas at people?? #RevolutionIsNow #RevolutionNow pic.twitter.com/Pyvtslt7Ua

Look at your shameless men showing their strength, calling for reinforcements on not so much a gathering of harmless and law abiding Nigerians. #RevolutionIsNow pic.twitter.com/AeRuQjniYY

#RevolutionIsNow protestors confront police in Lagos as protests continue despite police warnings that protestor could be charged with treason. pic.twitter.com/9TWs2rDYpi

Related Topics:#revolutionNowOmoyele Sowore
Up Next