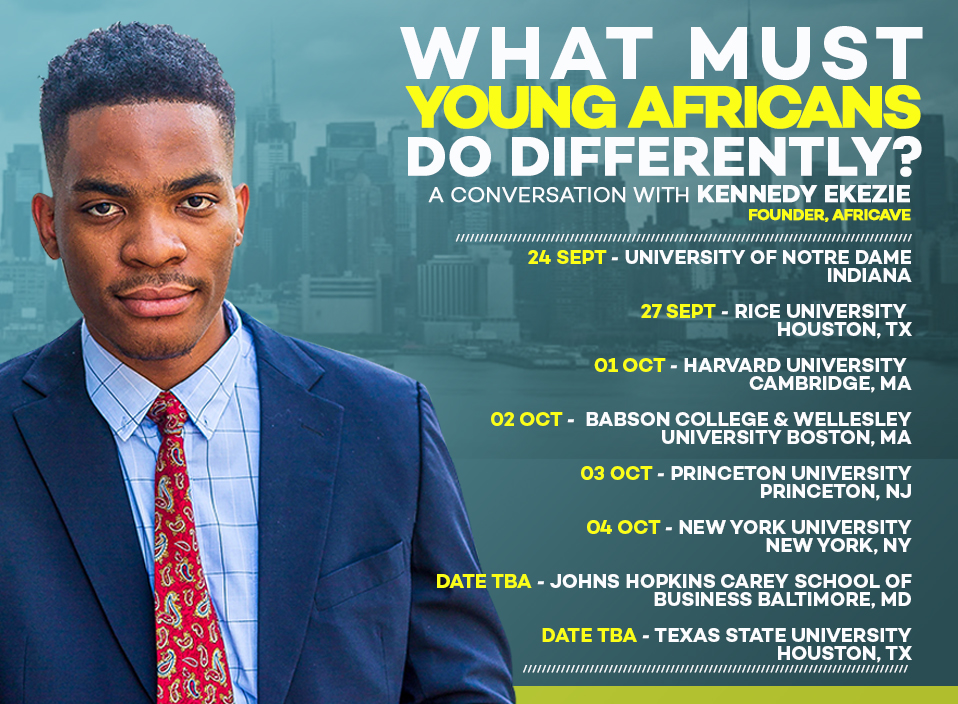 Kennedy Ekezie-Joseph, a Queen’s Young Leader, and CEO of Africave and has announced beginning of his speaking tour aimed at finding the best talent from Africa around the world. Kennedy is visiting 20 cities over the next 20 weeks, speaking to young Africans mostly university-aged students, recent graduates and young professionals. Amongst others, he is visiting Cambridge, Boston, New York, Houston, Indiana, New Jersey, Addis Ababa, London, Lagos, Accra, and Calabar. His tour starts in the US where he is speaking at schools including Harvard University, Princeton University, Babson, Johns Hopkins University, Wellesley University, New York university, etc.

According to Ekezie-Joseph, “Africa is the youngest continent in the world. The average age is 19.5. If young Africans are the future leaders, then there needs to be conversations around leadership and self-development happening amongst these young people globally. Therefore, Africave is taking this ambitious leap to lead and coordinate this conversation amongst all of us. The goal of this is to further nudge young Africans to think about real ways to contribute to the growth of the continent. As far as I know, this is going to be the one of its kind and I am thrilled to embark on it.”

He is the pioneer Nigerian recipient of the Yenching Scholarship (dubbed the Chinese Rhodes Scholarship) where he is a senior scholar completing a master’s degree concentration in Economics and Management.

Aspiring Fashion Designers, Here’s How You can Sketch Your Way to The GTBank Fashion Weekend