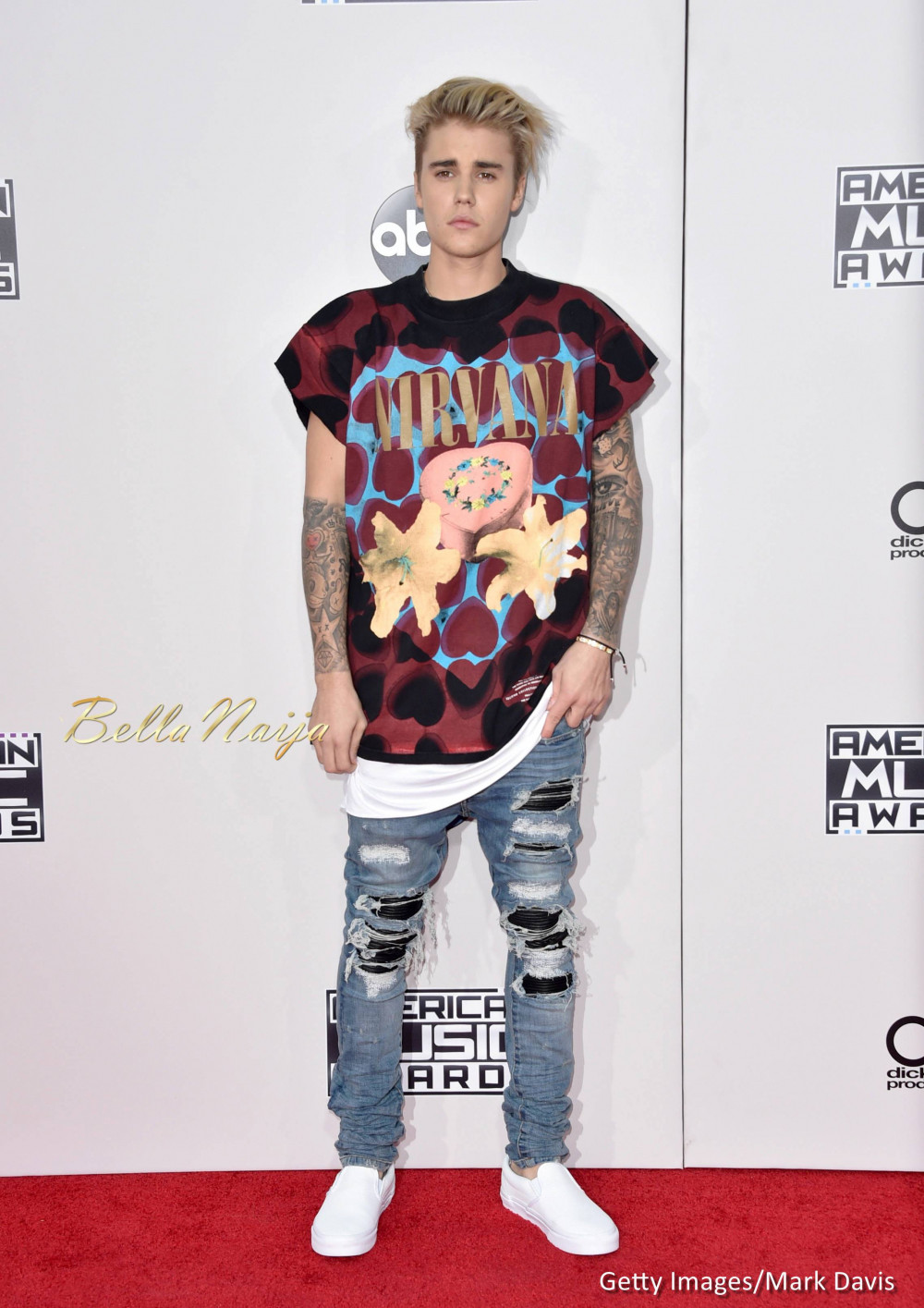 Canadian pop star, Justin Bieber, has spoken up in a lengthy Instagram post, about his struggles with depression while growing up as a child. A situation that led him to make poor choices in life.

The 25-year-old singer who is married to model, Hailey Baldwin, also admits in the post that he started doing “pretty heavy drugs” at 19 and credits his relationship with his wife as a factor that has helped him establish more healthy habits.

It’s hard to get out of bed in the morning with the right attitude when you you are overwhelmed with your life your past, job, responsibilities,emotions, your family, finances, your relationships. When it feels like there’s trouble after trouble after trouble. You start foreseeing the day through lenses of “dread” and anticipate another bad day. A cycle of feeling disappointment after disappointment. Sometimes it can even get to the point where you don’t even want to live anymore. Where you feel like it’s never going to change.. I can fully sympathize with you. I could not change my mindset. I am fortunate to have people I’m life that continue encourage me to keep going. You see I have a lot of money , clothes cars , accolades, achievements, awards and I was still unfulfilled. Have u noticed the statistics of child stars and the outcome of their life? There is an insane pressure and responsibility put on a child who’s brain, emotions, frontal lobes (decision making) aren’t developed yet. No rationality, defiant, rebellious, things all of us have to go through. But when you add the pressure of stardom it does something to you that is quite unexplainable. You see I didn’t grow up in a stable home, my parents were 18 separated with no money still young and rebellious as well. As my talent progressed and I became ultra successful it happened within a strand of Two years. My whole world was flipped on its head. I went from a 13 year old boy from a small town to being praised left and right by the world with millions saying how much they loved me and how great I was. I don’t know about you but humility comes with age. You hear theses things enough as a young boy and you actually start believing it, Rationality comes with age and so does your decision making process ( one of the reasons you can’t drink until your 21) .. everyone did everything for me so I never even learned the fundamentals of responsibility. So by this point I was 18 with no skills in the real world, with millions of dollars and access to whatever I wanted. This is a very scary concept for anyone. By 20 I made every bad decision you could have thought of and went from one of the most loved and adored people in the world to the most ridiculed, judged and hated person in the world! Being on stage according to studies is a bigger dopamine rush than almost any other activity… so these massive ups and downs on their own are very hard to manage. You notice a lot of touring bands and people end up having a phase of drug abuse, and i believe its due to not being able to manage the huge ups and downs that come with being an entertainer.

I started doing pretty heavy drugs at 19 and abused all of my relationships. I Became resentful, disrespectful to women, and angry. I became distant to everyone who loved me, and i was hiding behind, a shell of a person that i had become. I felt like i could never turn it around. It’s taken me years to bounce back from all of these terrible decisions, fix broken relationships, and change relationship habits. Luckily god blessed me with extraordinary people who love me for me. Now i am navigating the best season of my life “MARRIAGE” !! Which is a an amazing crazy new responsibility. You learn patience, trust, commitment, kindness, humility and all of the things it looks like to be a good man.

All this to say even when The odds are against you keep fighting. Jesus loves you… BE KIND TODAY> BE BOLD TODAY AND LOVE PEOPLE TODAY NOT BY YOUR STANDARDS BUT BY GODS PERFECT UNFAILING LOVE 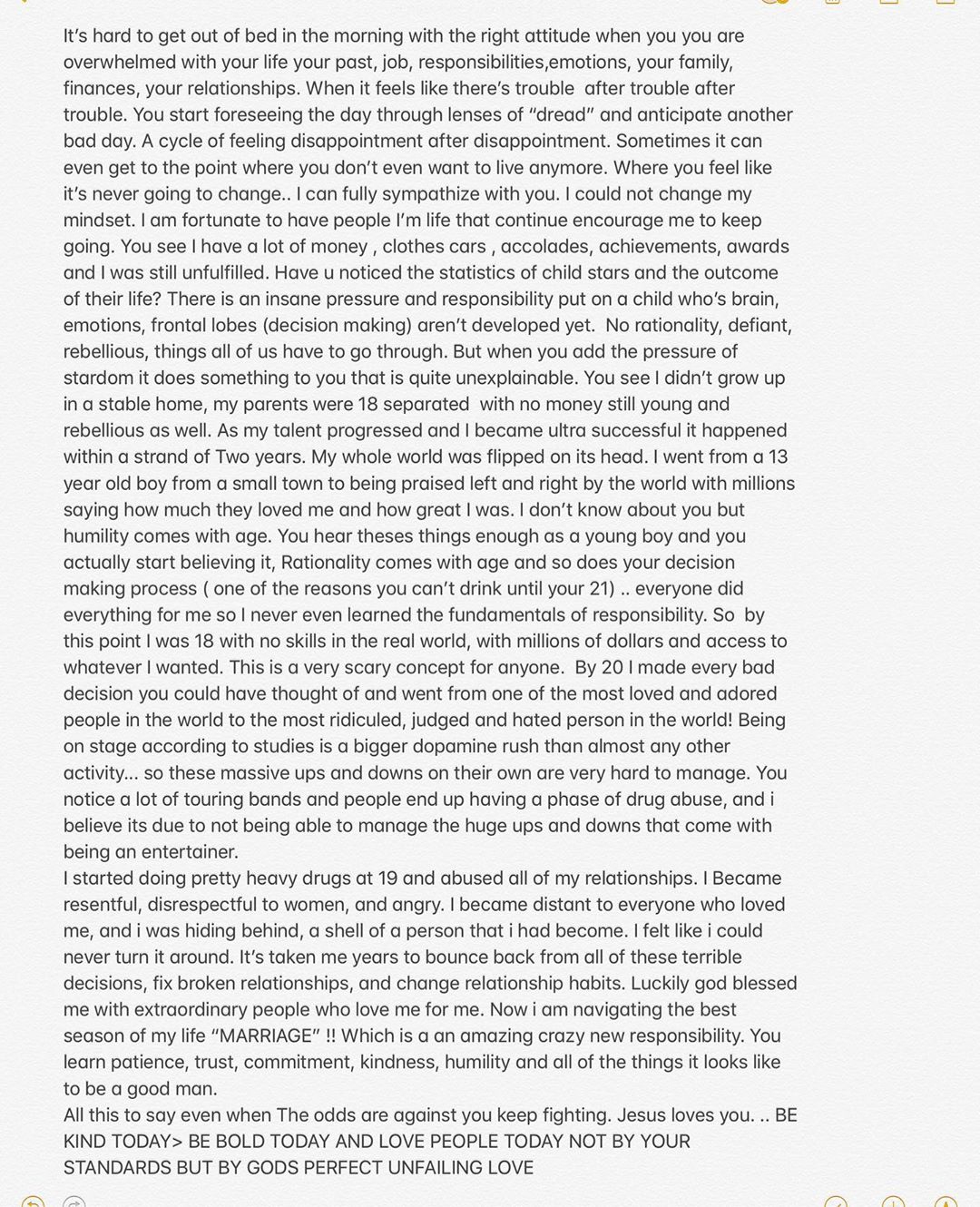 “First of all, Introduction”! Davido & Chioma set to Wed