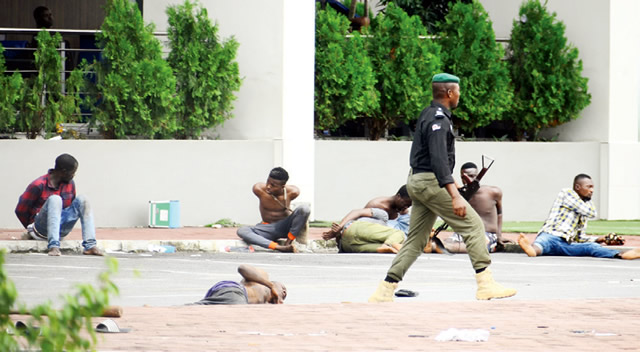 Policemen with some of the suspects at Novare in Sangotedo, Lekki, Lagos Photo Credit: PUNCH

The Inspetor-General of Police, Muhammad Adamu, announced that additional security measures have been approved for foreign missions and businesses across Nigeria.

This action is as a result of violence protests and looting of businesses owned by South Africans in Nigeria. The hoodlums allegedly acted on the widespread outrage expressed by Nigerians over the xenophobic attacks in South Africa in the past week.

Several businesses, assumed to belong to South Africans, were looted or destroyed in Lagos, Ibadan, Uyo and other parts of the country.

The IGP in a statement on Wednesday, also revealed that said 125 suspects were arrested in connection with the violence and looting in Lagos on Tuesday, with some of the stolen goods recovered.

The Inspector-General of Police, IGP M.A Adamu, NPM,mni has ordered water-tight security around embassies, foreign missions, foreigners and their businesses within the country.

This order is against the backdrop of the unfortunate attack on Shoprite outlets in Lekki Area of Lagos State on 03/09/2019 by some miscreants who attacked and looted the Malls ostensibly under the pretext of protesting against the incessant “xenophobic” attacks in South Africa.

To this end, all Zonal Assistant Inspectors General of Police and Commissioners of Police across the Federation have been placed on red alert to ensure no similar violence is replicated within the country.

The IGP condemns the violent attacks and notes that three police officers were seriously injured and a Police operational vehicle set ablaze.

He also notes that a total number of One Hundred and Twenty-Five (125) suspects have been arrested in connection with the incident while a good number of looted valuables have been recovered by the Police.

While recognizing the rights of citizens to air their views on salient national issues as enshrined in our statutes, the Force reiterates that these must be done within the confines of the law.

Miscreants and criminally-minded people who masquerade as genuine protesters are therefore warned to stay-off the streets of Nigeria as the Force will not hesitate to bring to bear the full weight of the law on any such law breaker.

Parents and Guardians are therefore enjoined to prevail on their children and wards to desist from acts capable of causing breakdown of law and order in the country.

Meanwhile, the Force has commenced investigations and profiling of the arrested suspects with a view to establishing their connection with the stealing, malicious damage, arson and disturbance of public peace on the day of the incident. The Force is hereby reassuring all law-abiding citizens, embassies, foreign missions, foreigners and their businesses within the country of their security and safety.