How Ready are You for ‘Queen Moremi The Musical: Reloaded’? | December 24th - January 2nd 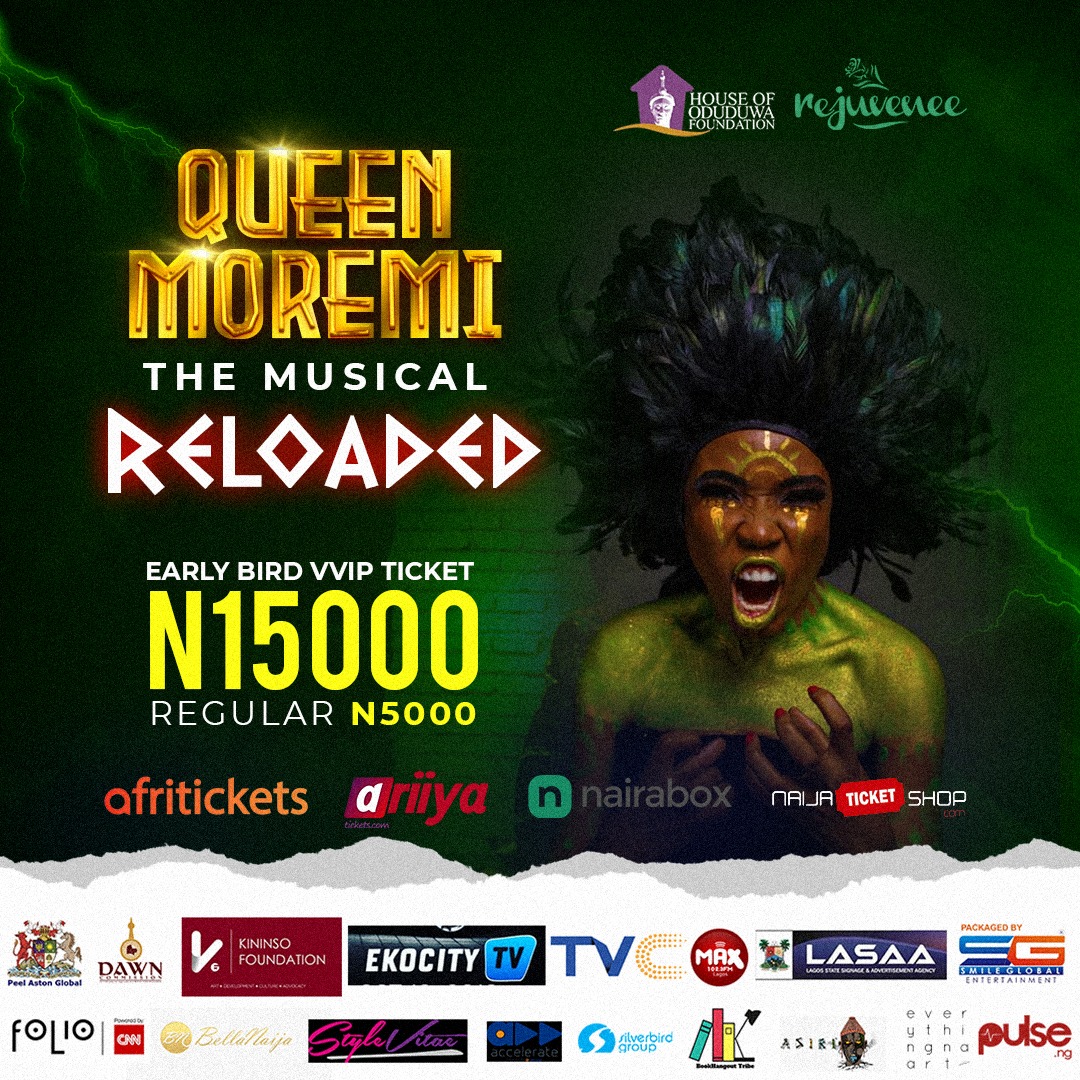 As the anticipation towards the musical stage play to laud a Yoruba Land Heroine “Moremi Ajasoro” who made a priceless sacrifice for the Ancestral home of the Yoruba land; Ile-Ife, builds up, the light has to be shone on the exceptional efforts of the production team of ‘Queen Moremi the Musical: Reloaded’, The House Of Oduduwa, led and energized by His Imperial Majesty, Ooni Adeyeye Enitan Ogunwusi, the Ooni of Ife. Also, the musical reloaded has a new director and to ice the cake – it is starring new sets of both prolific and upcoming actors!

Moremi Ajasoro, born to a powerful hunter in Ile-Ife was a queen who offered herself to be captured by the Ugbo tribe (not be confused with Igbos) who were always raiding Ile-Ife. Confident of her wit and beauty, she made a supreme sacrifice of offering herself to be captured by the raiders, after which their King married her, paving way for her to secure intelligence related to the enemies’ battle strategy which was eventually used by the people of Ile-Ife to liberate themselves from the raiders. 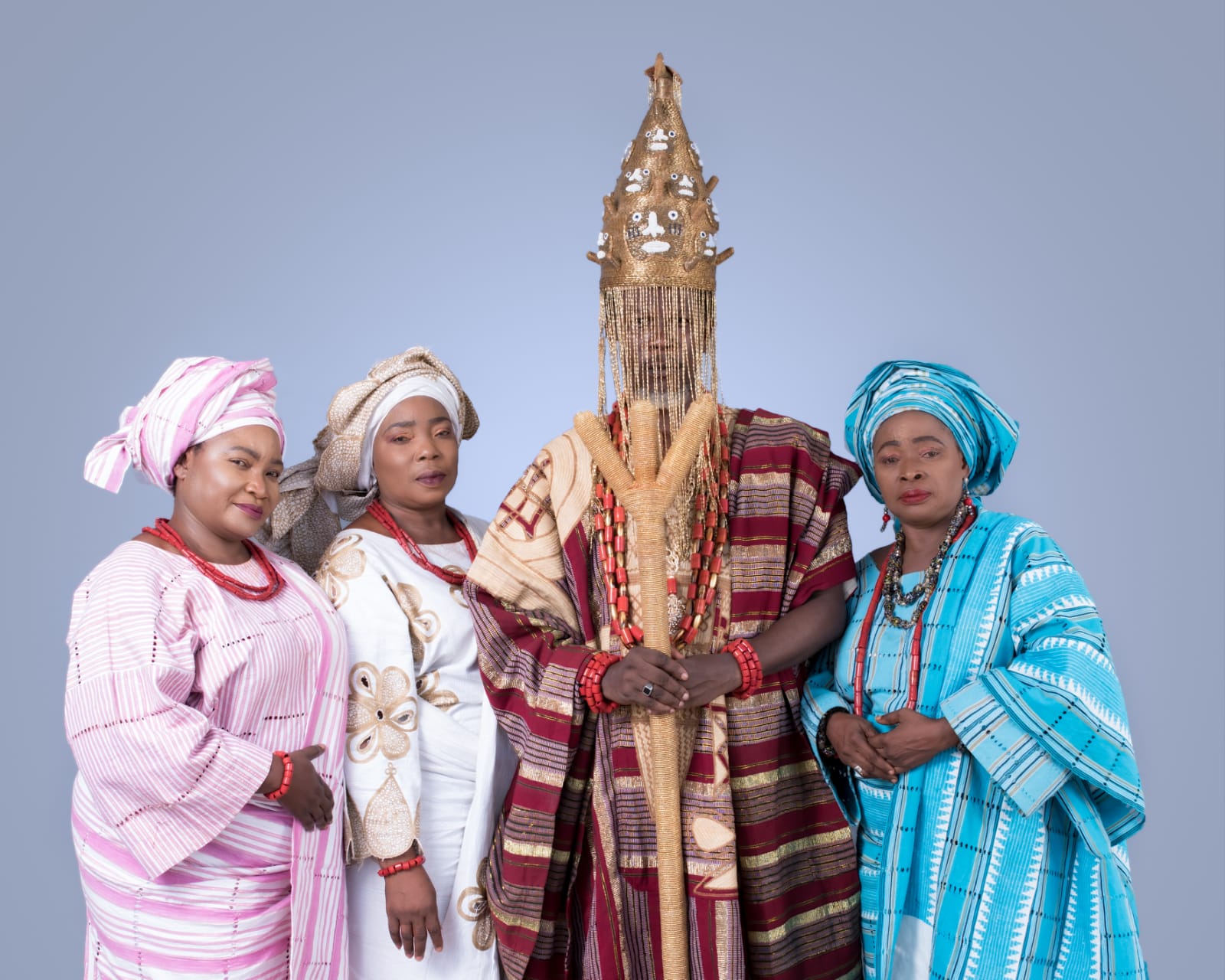 Hence, ‘Moremi the Music: Reloaded’ is a theatrical visualization and musical orchestration delivered on stage celebrating the legacy of the Yoruba Land heroine. Having held successfully twice in Lagos starring notable Nigerian actors like Omotola Jalade Ekeinde, Bimbo Manuel, Tosin Akinyemi, Deyemi Okanlawon, Lala Akindoju, Femi Branch, Kehinde Bankole and a host of others, the reloaded edition set to sail this December promising to display the richness of culture and excellent musical orchestration complemented with acting in a more soothing and sophisticated way.

It is no doubt that the Traditional ruler and Royal father of the Yoruba Kingdom, The Ooni of Ife, Oba Adeyeye Enitan Adewusi (Ojaja II)is a culture enthusiast and his impact on the Musical over time has continued to make the event flourish which in turn has reflected into a positive impact in the society. A passion that was highly triggered when he saw the stage play for the first time, which according to him almost had him in tears, motivated him to give the project his ‘all’, as an avenue to sensitize the society about women, celebrate them and ensure leadership and empowerment for women (and the girl-child) is ensured. 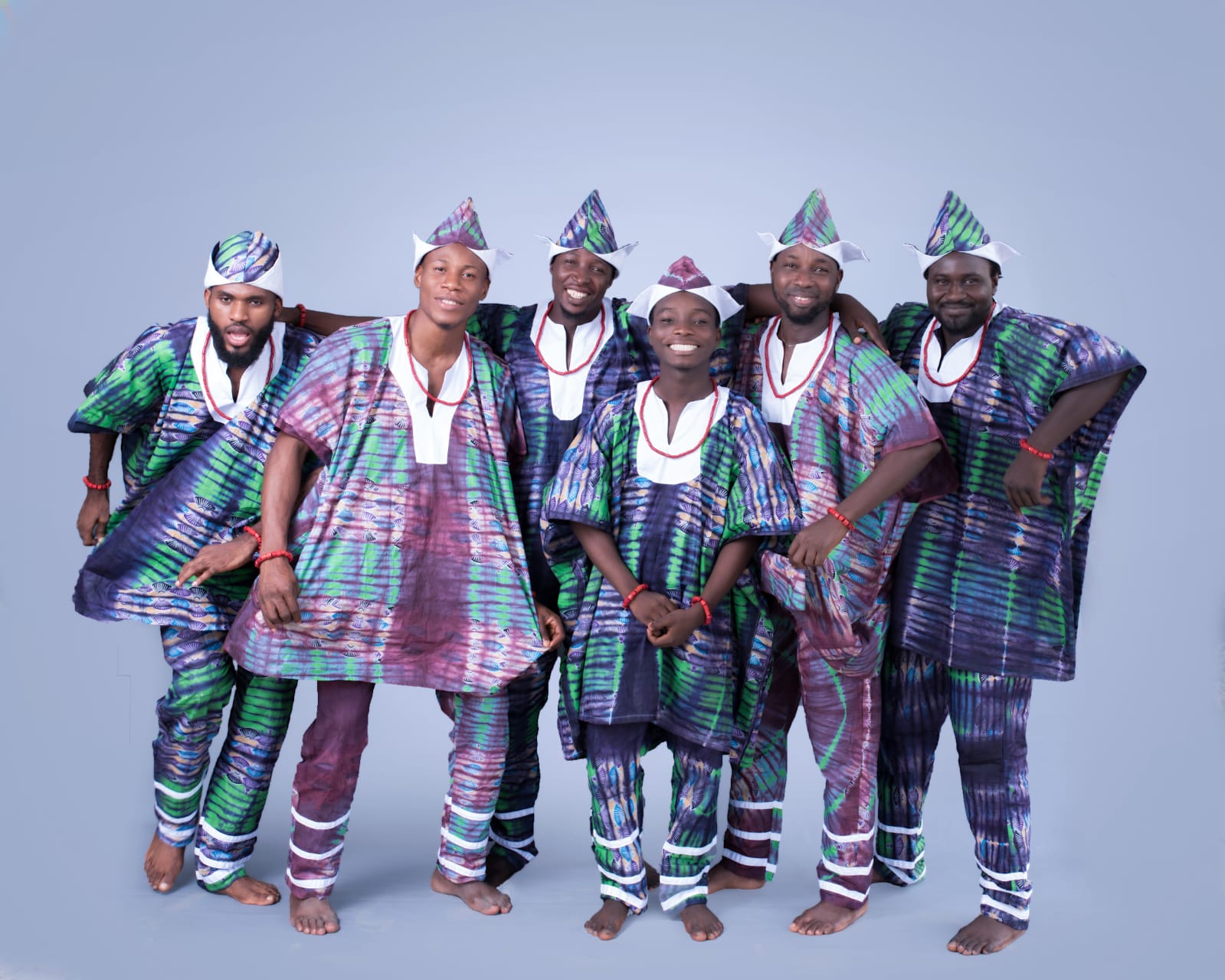 Another of His Imperial Majesty’s Impact with the musical is preserving the cultural heritage of the Yoruba people, right here in the motherland and also exporting the culture to different parts of the world. The stage play hosts guests from different parts of the world (Cuba, Brazil, United Kingdom, etc.) who are always entertained and enlightened about the historical and cultural value, diversity and richness of the Yorubas, and Africans a whole.

It is also obvious that stage plays, especially sophisticated and excellently delivered ones (like Queen Moremi the Musical) are gradually dying in Nigeria, a form of art that shows originality and imbibes cultural and ancestral value that should be upheld and well appreciated. Hence, it is the aim of Ooni Adeyeye Enitan Ogunwusi to birth a movement strongly committed to showing Nigeria’s cultural stage theatrical excellence and engage the world in it.

As part of the plans to make the musical indeed “reloaded”, the production team welcomed a new director to oversee and orchestrate the theatre production, knowing well that perfection and excellence are inevitable, Joshua Alabi has been announced as the new Director. Also, Benneth Ogbewei is the Music Director, while Princess Ronke Ademiluyi remains the Creator and Producer of the stage play musical along with The Ooni of Ife, Ooni Adeyeye Enitan Ogunwusi and Chief Olufunsho Amosun as Executive Producers. 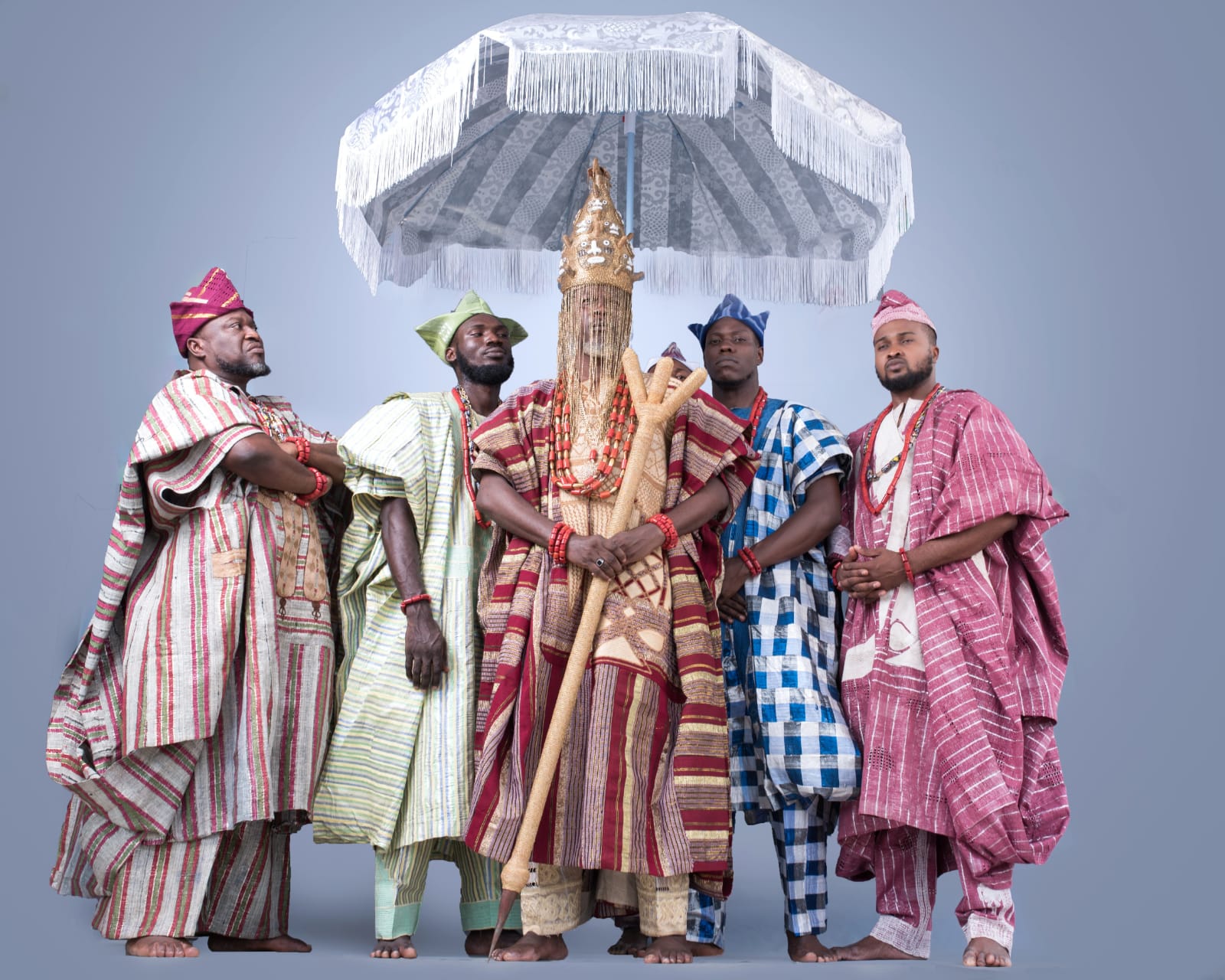 It is no doubt that the proper interpretation of roles and the orchestration of the music in Queen Moremi the Musical is very paramount; hence, the change of director, ushering in newer reputable and notable actors and players, including Femi Branch as Olugbo, Toyin Oshinaike as Ooni Alaiyemore, Ademiluyi Adelegan as Ooni Oranmiyan, Mojisola Kadiri as Esimirin, Princess Obuseh and Oluwafeyikemi Agbola as Omoremi along with other star quality cast member, including, Segun Dada, Olarotimi Adelegan, Ifakolade Ajanaku, Julius Obende, Chidi Okeke and others. Adding to the endless list, the musical has collaborated with the University of Lagos Creative Art Department, for capacity development amongst the dramatic art students and featuring them as ‘extras’ for the musical.

‘Queen Moremi The Musical: Reloaded’ as part of its development will also be on display in a new venue , scheduled to be showcased at the iconic African Ballroom of Lagos Intercontinental Hotel, located in the heart of Victoria Island, Lagos State. The venue provides the perfect feel and setting to encompass the sacred, ancestral and historical euphoria meant to complement the performances, giving the audience an exciting and thrilling experience of a well-orchestrated musical stage play.

The 1200-seated capacity space with its luxurious, sensational and highly aesthetic interior, adequate parking space, and great security will no doubt please the audience to truly experience and enjoy the musical.

As the festive season begins to unleash itself, schedule your diaries and thrill yourself with a mind-blowing cultural theatrical experience starting from the 24th of December 2019 till the 2nd of January 2020. 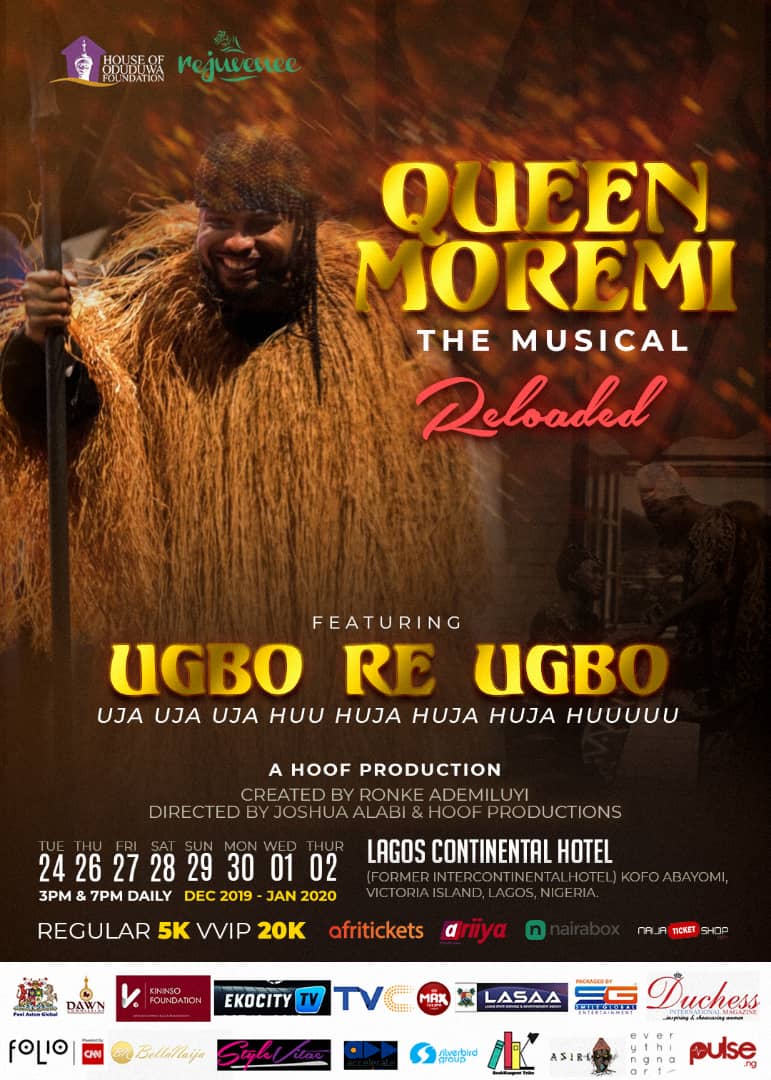 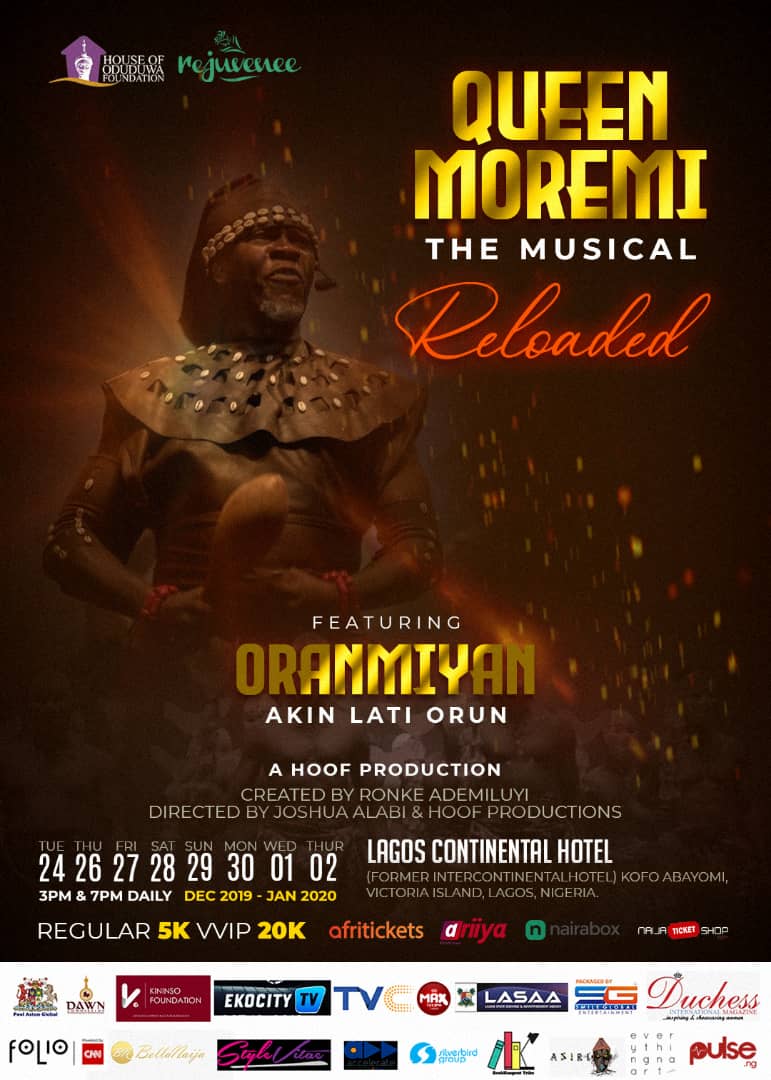 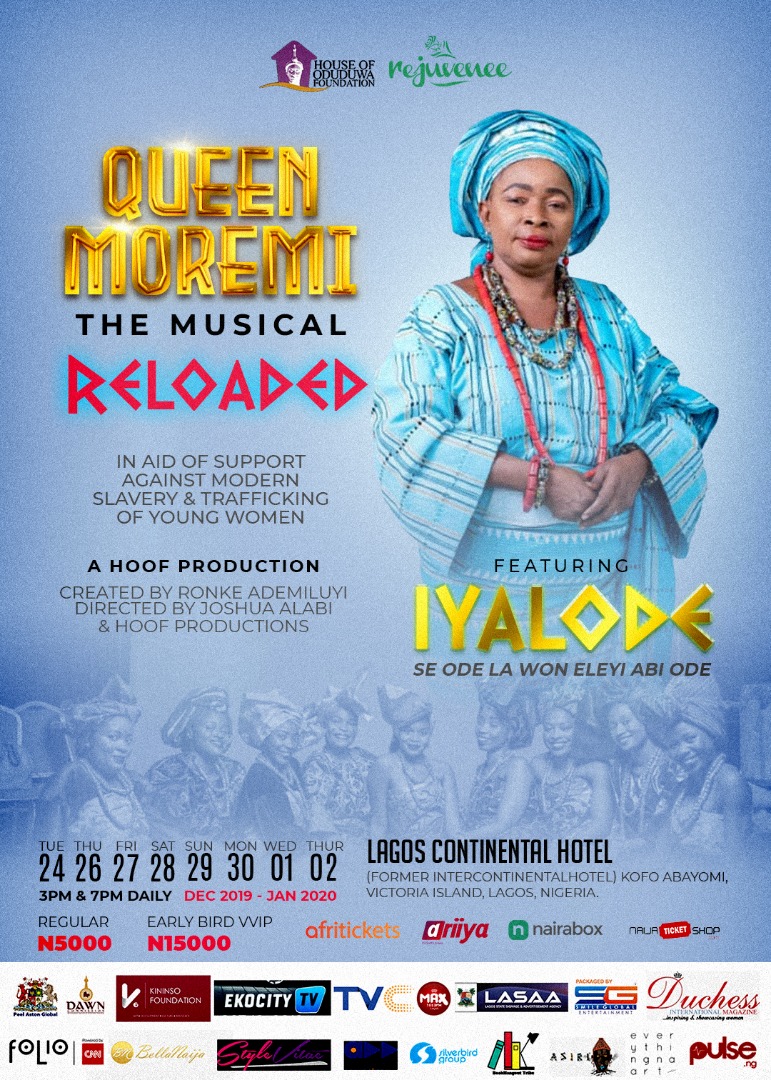 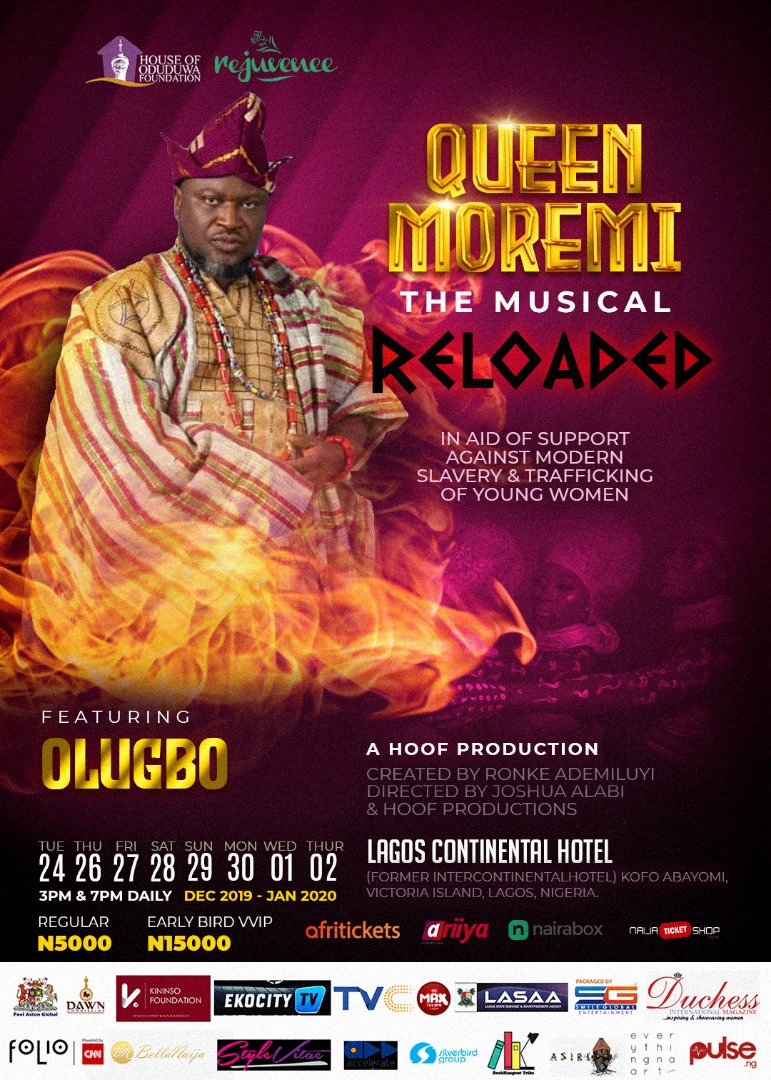 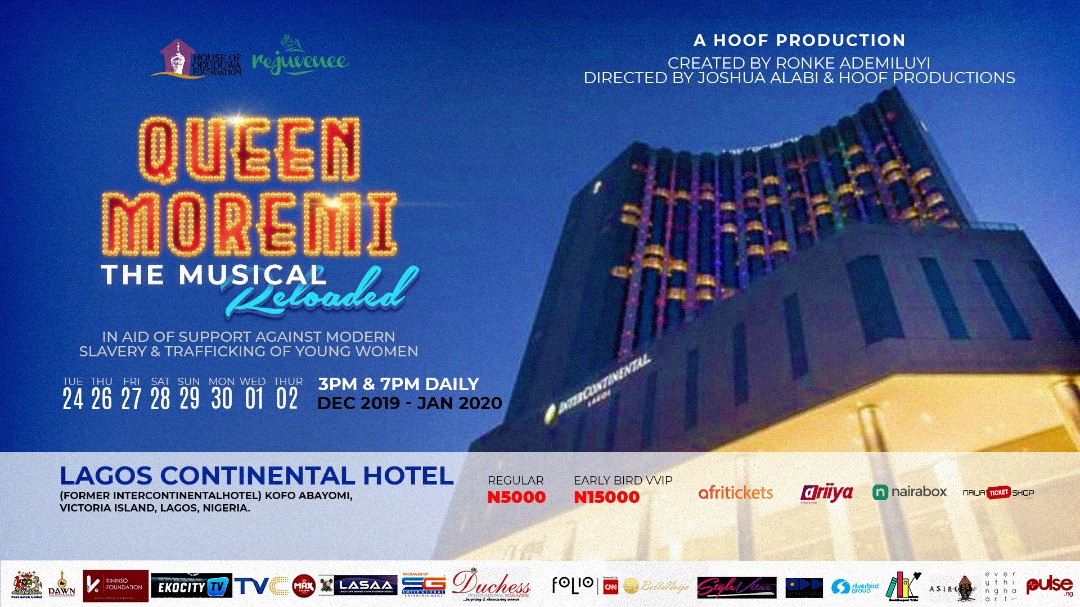 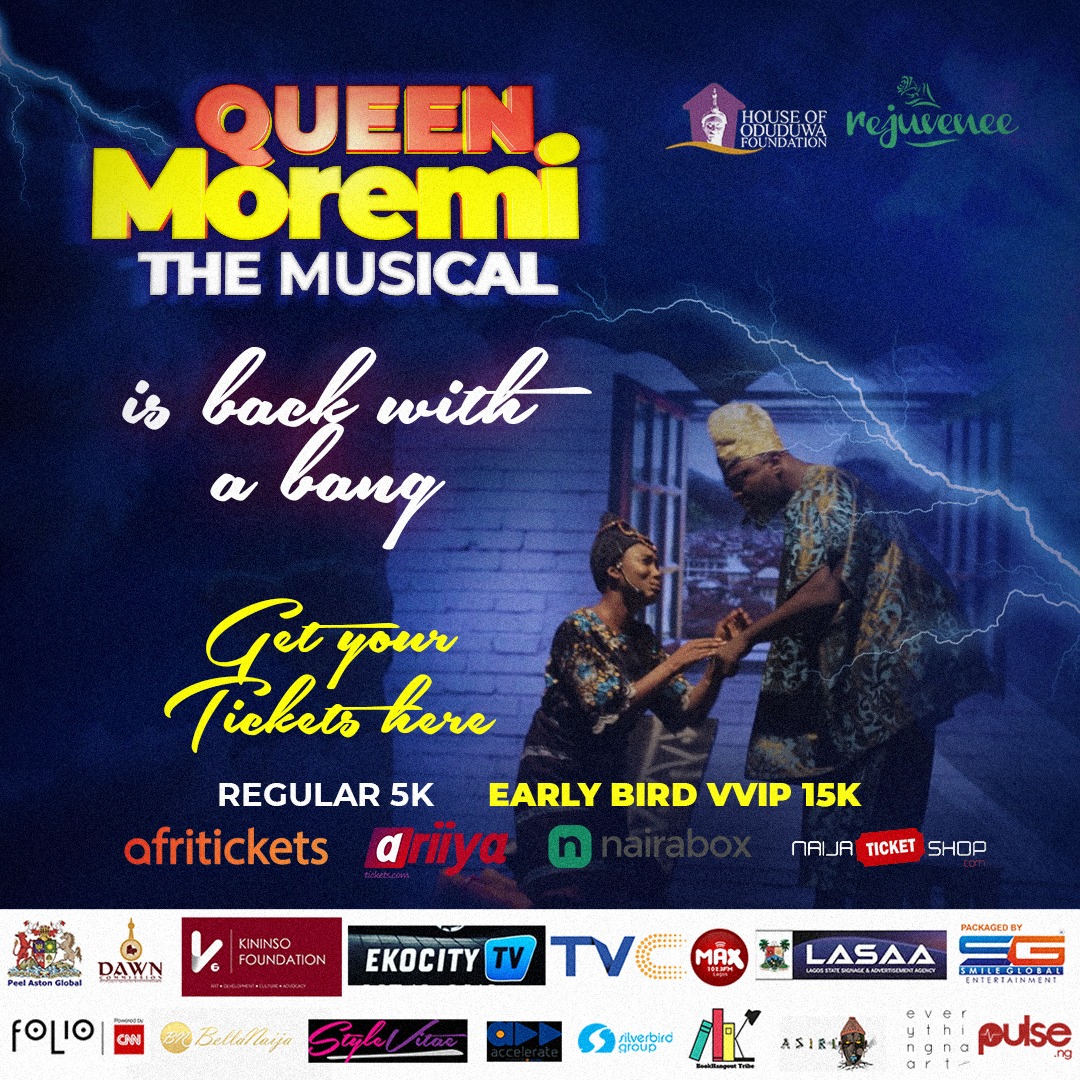 Get ready for the Lagos take over this Christmas! Our hero, the Iconic Queen Moremi Ajasoro, is here to save Ife once again and you can't afford to miss the royal experience . Get your tickets via the link in our bio to enjoy this epic musical with titillating lights, soothing sounds and energetic theatrical performances in #QueenMoremiTheMusical . Tickets are; Regular 5000, VIP 20,000 Venue – Lagos Continental Hotel, Kofo Abayomi Street, VI, Lagos Show dates ; Dec 24th to Jan 2nd, 2020 by 3pm and 7pm daily Don't forget to tag friends and tell everyone to see this wonderful musical #QMM2019

For further information about the musical, please contact [email protected]