To contribute to the prevention of COVID-19, LEAP Africa lends a Hand to Communities in Nigeria 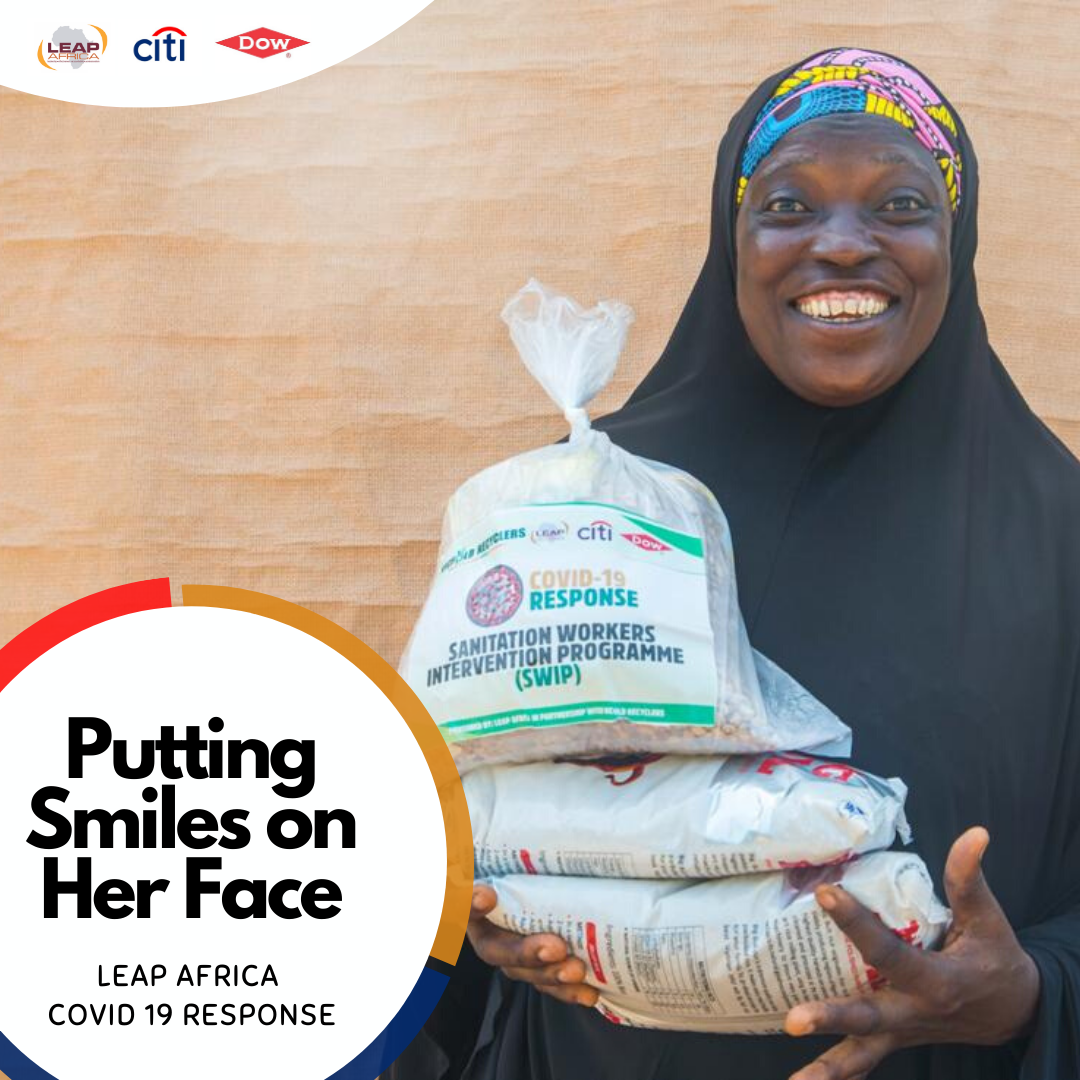 A recent estimation by the World Food Programme indicates the lives and livelihoods of 265 million people in low and middle-income countries will be under severe threat during the COVID-19 pandemic. In April 2020, the Nigerian Federal Government announced a total lockdown of major cities across the country to curb the spread of the deadly virus. The big question on the lips of many people when the government announced a total lockdown was, how will people who depend on daily income survive?

The LEAP Africa COVID-19 Response launched out with a goal; to work through our network of social innovators and alumni members to reduce the impact of the pandemic on the most vulnerable communities across Nigeria. 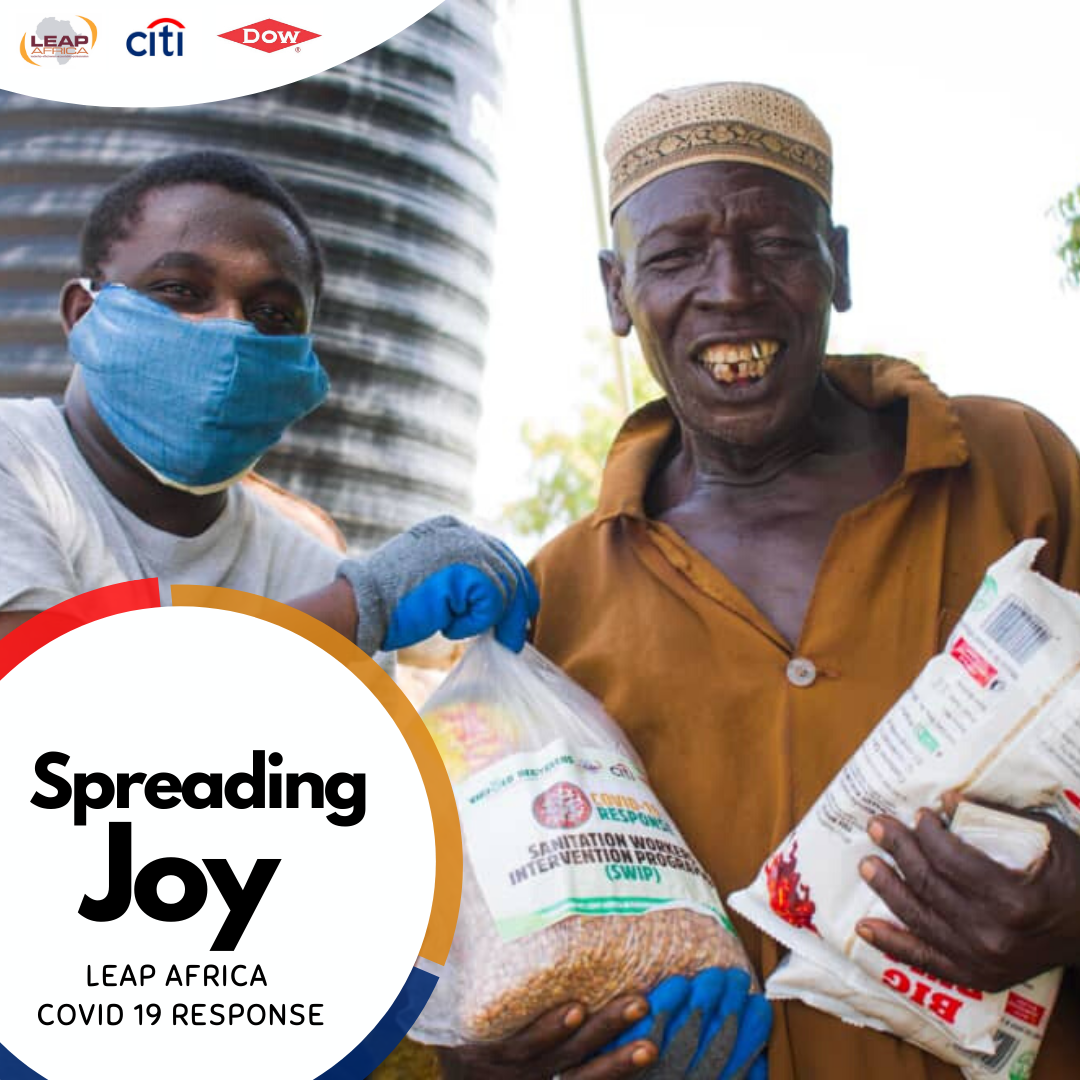 Mamamoni is a Fintech social enterprise in Lagos with the objective to empower low-income rural and urban women with instant money loans to support/start small businesses. According to Nkem Okocha, the founder of Mamamoni, as soon as the news of an imminent lockdown became public knowledge, she said she started receiving calls from her network of women, and their major concern was about survival, and this is because the majority of the women depend on the daily income to support their family, and their families would be at the risk of starvation if there were a total lockdown.

About Hope Behind Bars Africa

Hope behind bars Africa provides access to justice for underserved inmates in Abuja. At the onset of the virus in Nigeria, the authorities had placed a ban on visits to prison as a proactive measure to protect prison inmates. Funke Adeoye, the founder, said the news created anxiety amongst inmates.

The story is similar in Ilorin, Kwara state where Vicfold Recyclers, an indigenous incentive motivating waste recycling social enterprise. Vicfold captures value from waste while empowering women and youth in low-income neighborhoods. According to Victor, the spread of the pandemic meant their workers could be susceptible to infection, and asking them to stop work would also mean they had to go hungry. Dreams from the slum initiative in Ajegunle is an initiative committed to making the dreams of vulnerable persons living in remote and desolate communities a reality through Education, Empowerment, and Mentorship. Ajegunle is a slum in Lagos with people who barely struggle to survive even without a lockdown.

These were some of the propelling triggers behind the actions of the social innovators and alumni members. They decided to take on the responsibility of supporting and being the binge of hope for the women, widows, prisoners, and almajiri children, at a time when they desperately needed help. They decided to take personal leadership and lead the way. There could not have been a better time, especially in a country like Nigeria with no safety net or any limited social protection programmes for its citizens. In the words of Mother Teresa, do not wait for leaders, do it alone, person to person. Twelve social innovators across different states in Nigeria; are sharing hope and love in bags of goodies and ensuring families do not go hungry.

Agnes Nwachukwu is a 65-years old widow who depends mostly on gifts from people to go through the day. Of course, with the lockdown, the hope of getting anybody to drop by and give her gifts was almost impossible, so she had resigned herself to fate. However, during one of the outreaches, she happened to be a beneficiary. On sighting the COVID_19 Response team, she began to smile as she headed towards the distribution area. After she received her package, with the help of her grandson, she placed the food box on his head; almost moved to tears, she prayed fervently for the sponsors. Her grandson was very excited and told the team that her grandma won’t have to depend on anyone in the next few weeks before they can feed again.

The echoes were the same everywhere the team visited; Lagos, Kwara, Abuja, Kano, Nasarawa, Osun, Ondo, Delta, and Ogun Rivers state. Many of the community dwellers said they were weighed down not just by the fear of the virus itself but the uncertainty of where their next meal would come from. They were happy to welcome the team and grateful for the bags of goodies.

Victoria Gbadamosi; a pregnant woman with two children, thanked the team profusely after receiving the food items. She narrated how her husband (who has not gone to work for weeks due to the lockdown) and her children had barely had any decent food to eat for some days. According to her, prioritizing what the children would eat was more important and even that, was becoming nightmarish. She said the COVID-19 response team was God sent and the food supply she received was a miracle just in time. 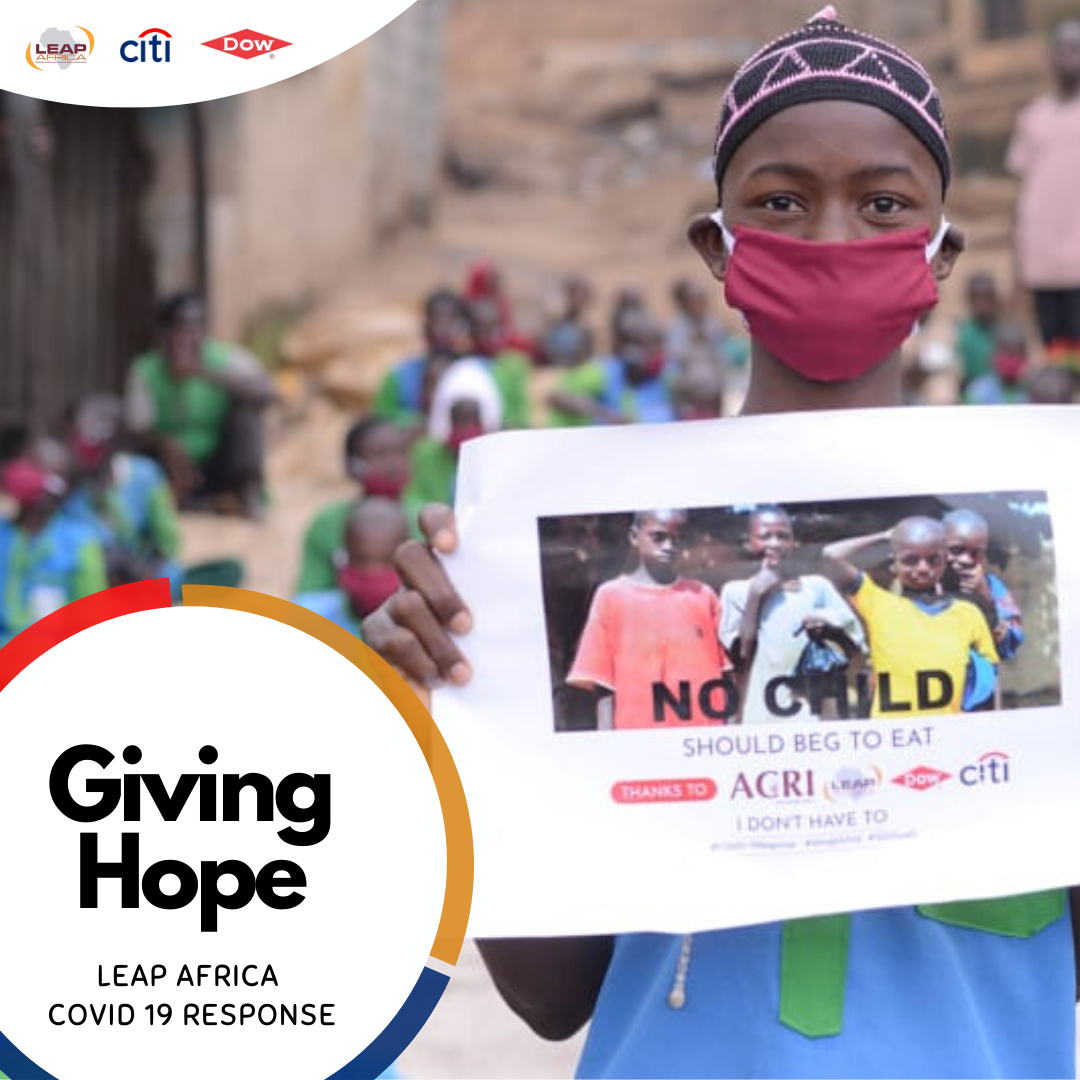 When information is truly power…

What was the place of sensitization and awareness? Information they say is power. With the news going around some quarters that the virus is an elitist disease, while some believed it was a totally false alarm. Some of our social innovators were at the forefront of creating awareness and sensitizing the people.

Almajiri Child Rights Initiative is an advocacy and educational support platform that amplifies the call for social inclusion of vulnerable children in Northern Nigeria. Mohammed Sabo Keana, founder and his team were on ground to educate and sensitize almajiri children in Abuja and its suburbs while also providing them with food and safety materials.

At one of the outreaches to Oke Aro Community, the Chairman of the community expressed his appreciation and noted that the sensitization would go a long way in empowering his people to understand the true and authentic stories about the virus and the right guidelines to follow. He also noted that the relief materials will serve as an incentive for the community dwellers to always remember to uphold the guidelines and reflect on the dangers in non-adherence in the fight against the deadly virus.

45 weeks, 79 states, over 2,5000 households, and more than 8,14000 individuals spread across different communities; all of these would not have been possible without the collaboration and support from Citi and Dow Chemical. Thank you to all the social innovators who are working tirelessly on the frontline; Lagos Food Bank Initiative, Cato Foods, NATAL Cares, Ashake Foundation, RUDERF, 100,000 Smiles Project, Vicfold Recycling, ACRI, Sonocare healthcare, Mamamoni Limited, Dreams from the Slum, Hope Behind Bars Africa.

No time in the history of the world has collaboration across sectors;- public, private, development matters the most than now, when we have all come to understand the true meaning of the world being a global village. There is no better time than now to also take on the mantle of personal leadership. If each one can reach out, the effort is too small. You can join us to do more because we believe that together, we can beat this.