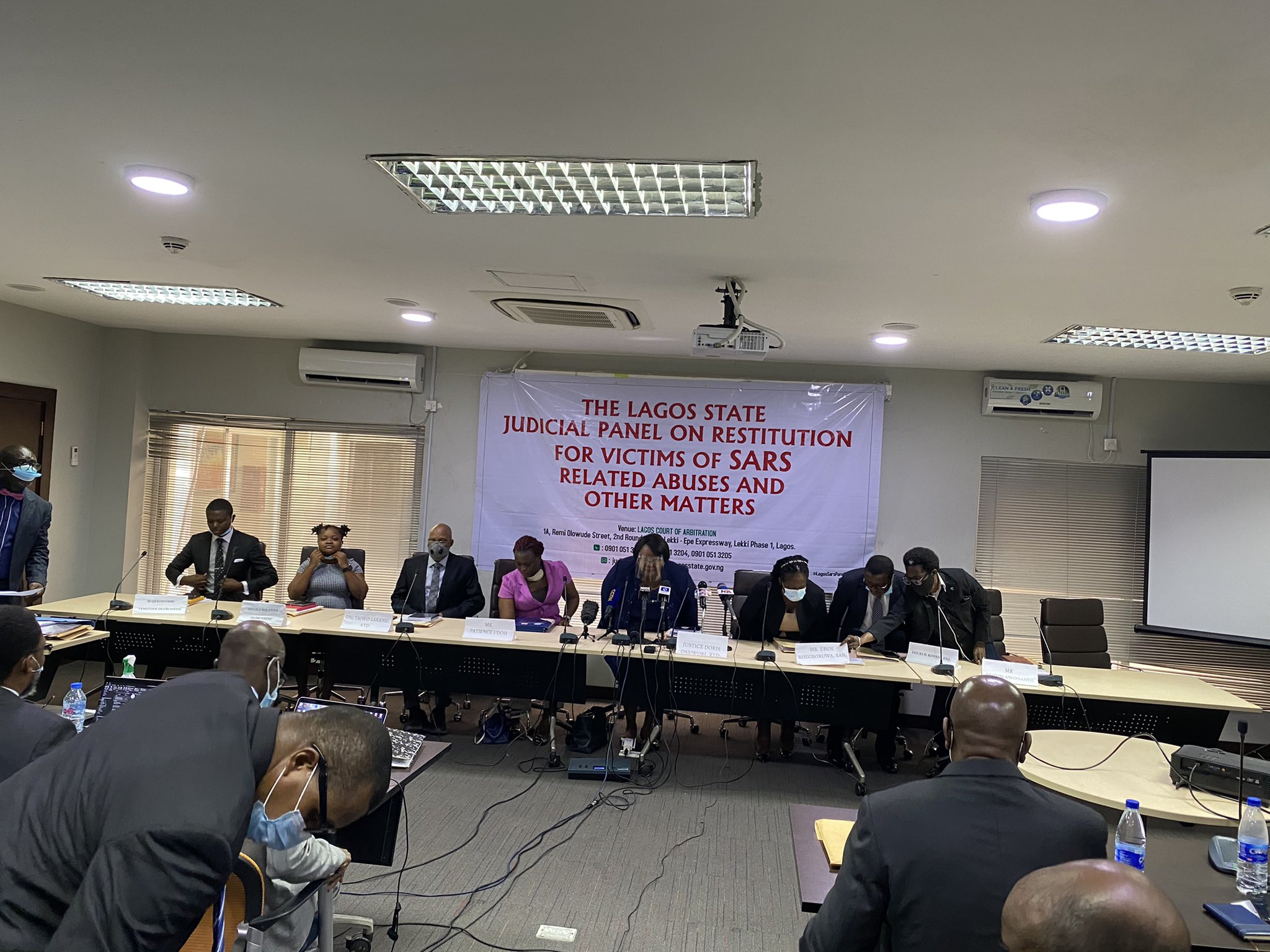 In light of the 5-point demands made by the #EndSARS protesters, the Judicial Panel of Inquiry set up to investigate the cases of police brutality in Lagos State.

For the panel sitting on Friday, November 20, the Managing Director of LCC, Abayomi Omomuwa, who was present at the sitting submitted the video footage for investigation on Tuesday, November 3 and the video was played at the last meeting from 5pm.

The video confirmed that LCC staff were at work past 4pm and that “Military is believed to have arrived about 18:55” on Tuesday, October 20.

See the highlights of today’s sitting at the Lagos State Judicial Panel of Enquiry on SARS by tech Entrepreneur, Editi Effiong.

09:55 At the Lagos State #EndSARS Judicial Panel of Enquiry.

It’s one month since the morning of the “powers above my control” speech, and we may finally be watching the footage from the night of #LekkiMassacre.

The military are here, so are the lawyers. And lots of cameras! https://t.co/7iyJ22epUE pic.twitter.com/i4qr4RkAee

10:13 The bag is out! You know what that means. We may be breaking a punctuality record today. pic.twitter.com/oQCdGzTgua

10:30 LCC have been called, as their testimony and video has import on the Army’s testimony.

LCC MD is here. Late, but here all right. LCC and LASG legal are here.

For #Endsars, we have Mr O and the retired boxer, Mr. Fusika. pic.twitter.com/Dodmg0SmRI

Power is back! The LCC video is being played from 5pm. pic.twitter.com/wnU8Curu2y

That’s because the camera movement is programmed. It’s believed that later on, the preset were overridden by LCC staff.

But LCC say all staff were gone by 4pm. pic.twitter.com/l0mjTuyvAs

12:00 At about 18:12, the crowd is growing at the toll gate. More people actually arrived after the 4PM curfew time (although the curfew did get push to 9PM).

LCC had claimed all staff left the facility. The video shows this to be untrue.

Also, power is off in only one section – the security lights. All other lights on. pic.twitter.com/70aOAaEf4Y

12:43 Please note the image from the video. The lights on the express lane are still on, while the lights near the toll gate are off.

12:47 We just saw the 18:56 moment when the lights on the express lane and beyond were turned off.

Some military trucks have crossed to the protesters’ side of the toll. A bullet is seen flying though the air. From what we were told, blanks don’t have that kind of trajectory. pic.twitter.com/ytqCj2ZYSI

12:54 At about 19:04 the military have almost complete control of the central area where protesters were.

Protesters have run to the far left and are mostly moving towards Lekki. Soldiers take over vacated space.

13:00 We are looking at 19:09 on the video. While a most of the protesters have run towards Lekki, a small group is huddled by the toll gate (lower centre), right where they were before.

We suspect this was the group where DJ Switch was.

That is a fire, and the military vehicle is right beside it. Recall the vehicle up the highway.

The military was in control of the area when the fire started. pic.twitter.com/sKOj4icwwT

13:21 The room is rather quiet. It’s hard to believe we are watching what we obviously are.

19:23 At this point, the military is in control of the area. There’s power at the toll, but no security lights on. The camera is manually operated.

The fire up the road is growing. pic.twitter.com/djD1qzG69W