The Lagos State Government closed the curtain on its 3-day economic summit also known as Ehingbeti on Thursday, February 18th, 2021.

The event featured thought leaders and several stakeholders within the private and public sector of the state’s economy and has birthed new resolutions that will go on to shape the realities that will be obtainable within the state in the coming years.

However, some of these resolutions were influenced by discussions held in selected hubs pre-Ehingbeti. As a prelude to the economic summit, the Lagos State Government and Techuncode – a tech media platform, partnered with selected hubs to host niched conversations around critical issues to map out a strategic plan towards addressing such issues.

One of the partnering hubs for the discourse was Ingressive Capital. During its session, participants discussed the topic “Accelerating Impact through Investment in Tech”.

The conversation was moderated by Ayobamigbe Teriba, a tech enthusiast with experience in human resources, business relations, and venture scouting. 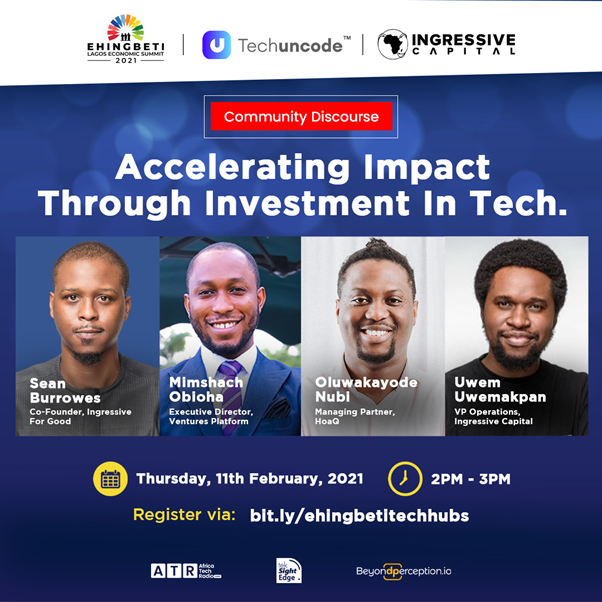 The Conversation
There’s a great measure of growth potential hidden in the tech ecosystem. However, there’s been little impact compared to what can be achieved from the space due to several reasons including lack of funding.

Lagos State has a lofty projection of becoming a smart city by 2030. The achievement of this feat could bring the state into an era of economic boom. But, all of this is largely hinged on the prosperity of the tech ecosystem; one that currently lacks adequate financial support.

Building on these points, the panelists began to lay, brick by brick, a proposed strategy towards channeling Investment towards tech businesses.

The panel established that grants should be balanced with venture capital funding to enable businesses to have optimal results.

This led to a critical question; to what extent has the Lagos State government set up policies to attract venture capital funding alongside other cities in other countries around the world.

Commenting on the question, Oluwakayode Nubi used a cheeky quote from Stripes “we haven’t won yet”. According to him “we still have a few grounds to cover”.

“There is much more that can be done to actually target the technology ecosystem in the sense of having actual programs as well as partnerships with venture capitals and non-profits like Ingressive for Good.” He added.

Nubi also highlighted that the government will need to be consistent in hosting conversations with tech communities to keep up with events as they unfold. This will help to inform the government on when to plug in financial aids.

Empowering Women
This seems to have been one major subject of interest at the different hub discussions. Interestingly, the newly inducted director-general of WTO, Ngozi Okonjo Iweala, touched on the subject during her presentation on the first day of the Ehingbeti summit.

During the Ingressive hub conversation, the panelist tried to provide answers to why men inarguably get more investment opportunities than women. Bisola Elelu, Fund Analyst at ingressive Capital suggested that the answer was rather obvious; there are more men in tech than women.

Commenting on the question, Nubi mentioned that there’s a need for a deliberate approach towards choosing female founders for investments even if it might seem like there is a shortage in supply.

Other Noted Issues
Sean Burrowes, Co-Founder of Ingressive for Good brought up an interesting angle with impact investing. He maintains that;

Also speaking on policies, Mimshach Obioha, Executive Director Ventures Platform added that there are no proper incentives for investors in Nigeria.

Citing the UK as an example, he said some policies state that if you invest in the early stage, the country is willing to refund your investment if the company goes under in a number of years. The absence of such policies in Nigeria as a nation has a negative effect on Lagos as a sub-economy.

How can Lagos state accelerate that impact to attract more investment?
Sean was quite direct in answering the above question. He proposed to “audit active programs, align resources and ensure there is accountability for how the resources are being deployed as well as in the outcomes.”