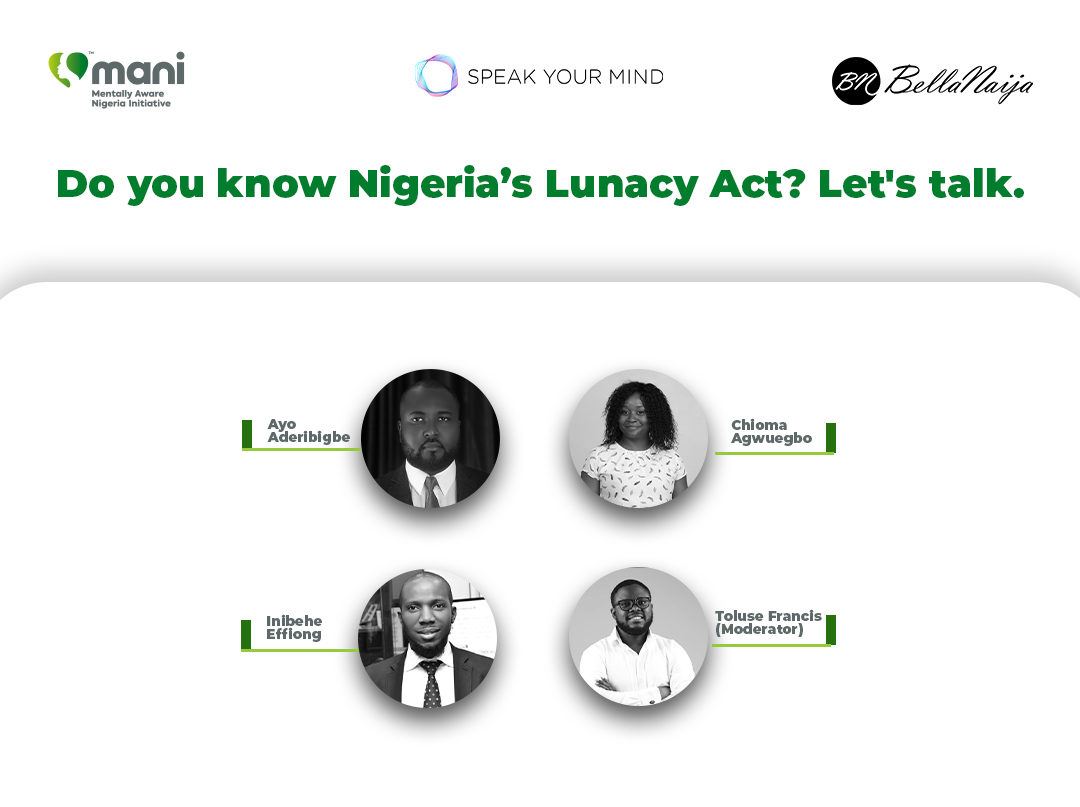 On Wednesday, May 19, 2021, Mentally Aware Nigeria Initiative (MANI) hosted a session on Twitter spaces as part of their planned activities for Mental Health Awareness month.

The focus of this event was on Nigeria’s Lunacy Act and in attendance were Ayokanmi Aderibigbe, Inibehe Effiong and Chioma Agwuegbo.

The idea behind the discussion on Nigeria’s Lunacy Act was to first create awareness and then propel individuals to see reasons why they need to join in the cause to ask the legislative arm of the government to repeal and replace the act.

Ayokanmi Aderibigbe, MANI’s chief compliance officer, remarked on the appalling state of the legal system and mental health. “It is such a contrast to think that people who attempt suicide in Nigeria today, are liable to one year in imprisonment, but if they do commit a crime and then they claim the defence of insanity, they will get a waiver. And what that waiver essentially means is that you are not going to walk free but you are going to be locked up, in some sort of sanitorium.” He reiterated that the discussion was to spur listeners from awareness to action on these lingering legal issues.

Private legal practitioner, passionate about human rights advocacy, Inibebe defined the lunacy act and shared his opinions on the act. “The piece of legislation that is known as the lunacy act, is an act that predates our independence. It has its origin in 1958 and has been in existence without any significant modification. The said act has also been replicated in most of the states, in terms of what is known as the lunacy laws across the various states, which are basically verbatim reproduction of the lunacy Act. Now, what the Act is essential to do, or pretends to do, is to regulate or provide for a legal regime governing the administration, treatment, and the confinement of persons that are suffering from some form of a mental health problem or dealing with a mental health crisis in general. Now, the lunacy is archaic. It is a piece of legislation that has outlived its usefulness. And to the best of my knowledge, it does not really address the specific legal framework on how persons with mental health problems are to be attended to.”

“The thing about the act that particularly disturbs me is that it gives medical practitioners and magistrates power to determine who is a lunatic, when to detain the person, and how long to detain the person; taking away the rights of the person. Also, our religions tell us to say it is well, even when we’re clearly not well, we’re also shamed into not speaking about whatever mental health challenges we have because we don’t want to be known as the person from so and so a family with a mental health issue”, said Chioma Aguwegbo, executive director of TechHerNG and convener state of emergency movement on gender/sex-based violence.

Inibehe went further to encourage participants of the session to be advocates for mental health in their local communities. He also advised that citizens can work with NGOs and CSOs to push for the needed change in mental health legislation by visiting constituency offices of politically elected leaders to discuss the need for appropriate and rights-respecting mental health law, especially at the state level.

He posited that if each state has mental health laws that take into cognisance, the human rights of individuals living with mental health problems and can provide enough facilities to provide care and support for them, it will become easier for them to surmount most of the societal challenges they face.

Chioma implored participants of the session to spread mental health awareness and speak up for mental health in their communities regardless of their mental health status. Mental health advocacy, she said, shouldn’t be engaged in by only individuals with lived experience, rather, all Nigerians should come together to fight for better health services in general.

She said, “What we can do as individuals is to constantly, join organisations like MANI, join organisations within Nigeria to push and advocate for a new mental health law that provides a legal framework that protects people who are coping with mental health problems. I think it is also to realise that as an individual, struggling mentally, doesn’t make you less than who you are.”

To end the session, Ifedayo Ward, MANI’s Executive Director briefed the audience about the organisation’s advocacy efforts for better mental health awareness and legislation through the Speak Your Mind Campaign. She encouraged participants to join in the organisation’s open letter campaign which will be kicked off in June 2021. She explained that the main purpose of the upcoming open letter campaign is to spur politically elected leaders in their constituencies to push for better mental health legislation.

This is a third of several sessions MANI is hosting on Twitter Spaces with support from BellaNaija for Mental Health Awareness Month in May.