Eloho Omame – Co-Founder, FirstCheck Africa - "I stopped seeking permission and expanded my vision in more ways than I ever imagined"

Episode 8 of ‘They Said I Couldn’t’ features the story of an early-stage investor and an advocate for gender and inclusion in technology and entrepreneurship in Africa – Eloho Omame.
‘They said I Couldn’t’ is a docu-series brought to you by Sunlight Nigeria in collaboration with Under 40 CEOs. 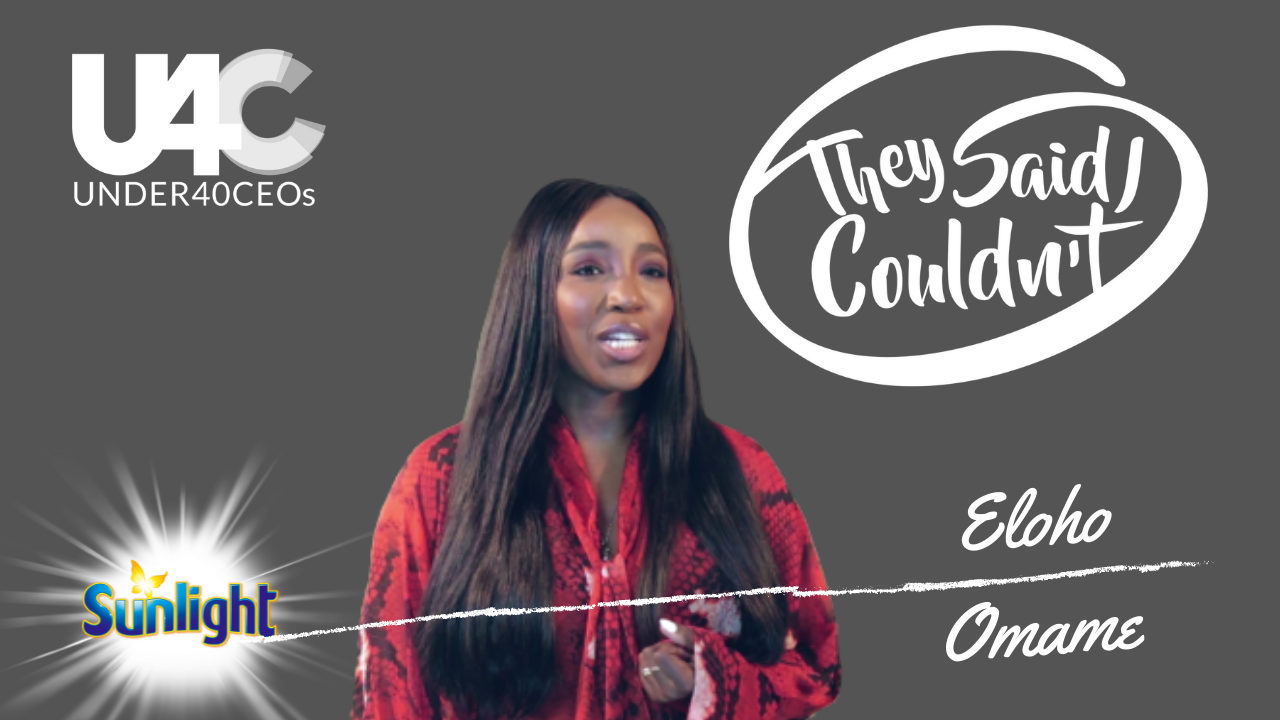 Everyone whose permission she sought talked down on her dreams but Eloho stopped waiting for permission that might never come and followed her dreams passionately.

Oftentimes, we’re inspired by the stories of successful women. But hardly do we know what goes on behind the scenes. Their struggles, the several times they’ve gotten NOs for answers.
Meet Eloho Omame in this episode as she recounts her experience building and launching a female-first Africa-focused investment fund.

About Eloho
A mission-oriented business leader, Eloho Omame has lived her career in two phases. Today, she is an early-stage investor and an advocate for gender and inclusion in technology and entrepreneurship in Africa.

As a co-founder of FirstCheck Africa which launched in 2021, she is an early believer in the massive underleveraged potential of Africa’s next generation of female founders. FirstCheck Africa is building Africa’s first female-first, venture capital fund, investing exclusively in technology ventures led by women and diverse founders. By focusing on Africa’s vibrant community of ambitious, under-estimated women in tech, they are shifting narratives, driving representation and fostering inclusion among startup founders, operators and investors.

In 2018, she launched Endeavor Nigeria, an entrepreneurship network for high-impact founders leading high-growth technology companies at the scaleup stage. In 2017, in collaboration with the Lagos State Employment Trust Fund, she conceptualised, built and launched Lagos Innovates, a portfolio of startup support programs — a first-of-its-kind by a sub-national government in Africa.

With over 15 years prior spent in finance roles across investment banking and growth private equity covering the United Kingdom, European and African markets, she is an expert in capital structuring and fundraising for companies at all stages, including startups.

She is a mentor at Endeavor Nigeria and former Chair of the Finance and Capital sub-committee of the Lagos State Employment Trust Fund’s MSME Recovery Fund, which was inaugurated to support small businesses after the devastating combined effects of COVID and the End SARS protests.