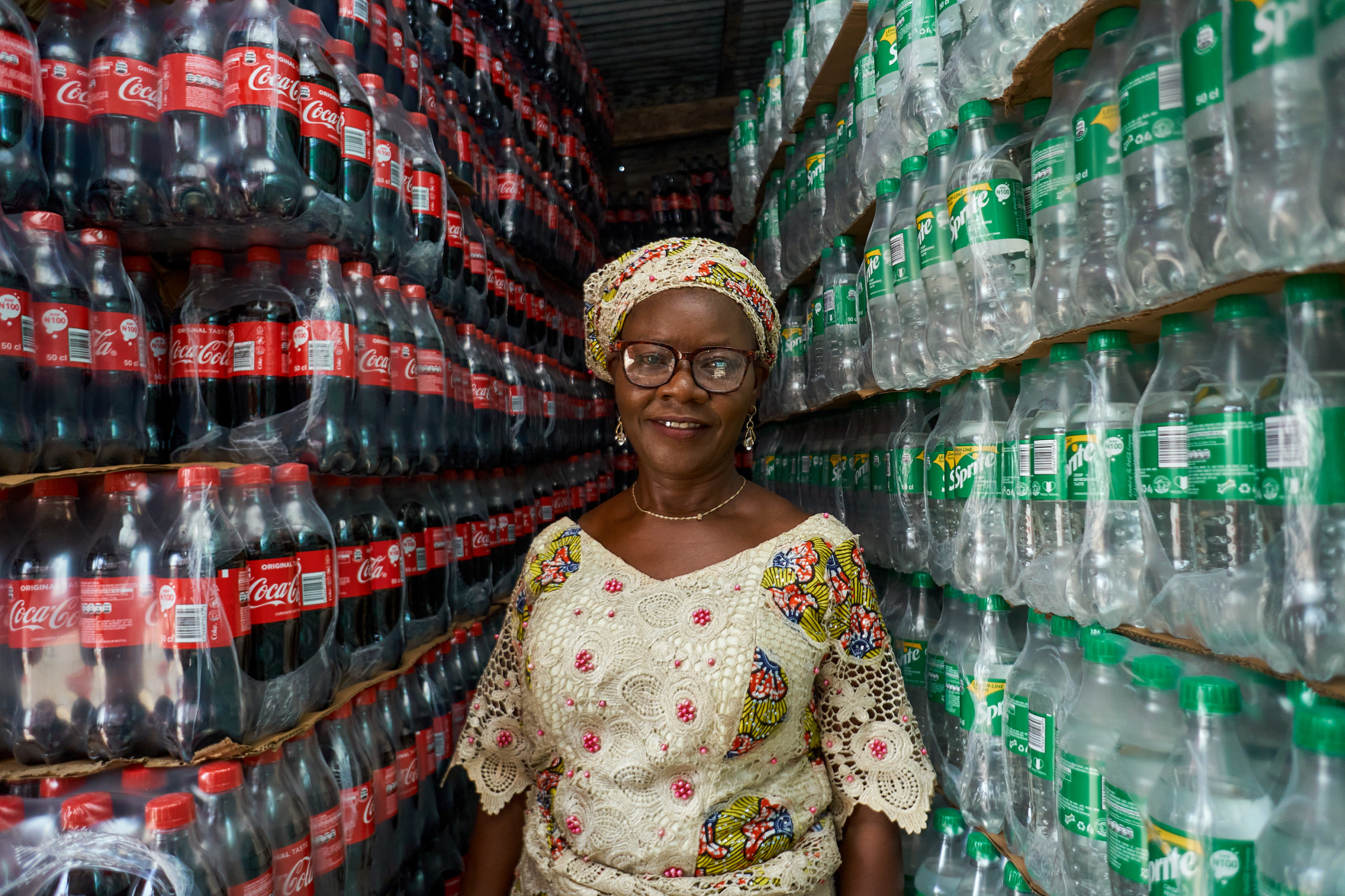 On most days, Lawal Silifat Tola, hawks her moin-moin on the streets of Lagos with a smile on her face. Calm, soft-spoken and warm, her legion of customers, who were mostly artisans, knew the young Silifat as a happy-go-lucky woman unperturbed by life’s many troubles. But, in reality, her heart was a time-capsule bursting with images of fear about her future.

Her situation could have remained so until 32 years ago. She had visited a construction site on Ikosi Road to sell her steamed bean pudding to artisans that fateful day. There, she met a Coca-Cola delivery personnel who challenged her about the missing piece of her business puzzle.

“The man walked up to me that sunny afternoon and told me that something was missing from what I was selling. Upon enquiry, he told me I needed to include Coca-Cola products to what I was selling to people at the site,” Silifat began.

“I told him I had no money to procure the products, but he offered to give me two cases as samples – at no cost. It was a Friday. The following day, I had sold the two cases and ordered for more.”

Today, Silifat, who is fondly known as “Alhaja Coke” by her extensive network of customers, manages one of the biggest MDPs in the NBC’s stable. From building her own apartment to taking responsibility for her home, including funding her children’s overseas education, courtesy of the proceeds from her business, Alhaja Coke’s story remains a testament of hope amidst despair and re-echoes how a single opportunity can change the narrative for people and communities.

Women empowerment serves as the bedrock for growth and prosperity in any society. By empowering women economically, there is a greater opportunity for economic diversification, productivity and income equality, among other positive outcomes – as indicated in a recent report by the United Nations.

Beyond economic empowerment, providing women and girls with life-skills is critical for their wellbeing, and provides them an opportunity to thrive and have access to social protection.

Studies have shown that one major factor that inhibits women empowerment is poverty. In developing countries like Nigeria, women and girls often fall into the minority categories, disproportionately affected by limited access to education, job opportunities, resources, and health care.

More so, in such developing communities, societal constructs and glass ceilings could further limit the capacity of women to take on roles that could allow them to pursue social and economic endeavors on the same basis as men.

To this end, there are often great inequality margins between men and women – even in some developed societies – and this not only relegates them to subordinate positions but also predisposes them to gender-based discrimination and violence.

While the developed world seemed to begin making strides with women empowerment – in line with the United Nations 2030 sustainable development goals – the 2020 COVID-19 pandemic hit and made these inequalities more severe in developing regions.

In Nigeria for example, women make up a majority of the informal economy, as they are mostly traders who rely on physical market structures to exchange their goods and services. As a result, they were the hardest hit when the lockdowns were enforced in the wake of the pandemic.

Women in the informal economy scarcely ever have access to other forms of trainings or life skills that could be adopted in the case of a lack of access to markets, which contributed to a further decline in their financial standings.

As the economy begins to recover, albeit slowly, individuals, institutions, and corporate efforts have been seen to be beneficial in speeding up the process of establishing a more balanced society for women to thrive and experience economic inclusion.

The Coca-Cola System, comprising the Nigerian Bottling Company and Coca-Cola Nigeria, has been at the forefront of empowerment campaigns geared towards women. For a company whose customer base is made up of a significant number of women, the Coca-Cola System recognizes the exigency of not leaving them out of the value chain, as they remain key contributors to success.

This is why over the course of its operations in 70 years, the organization has continued to roll out impactful initiatives to enrich the lives of underprivileged women in Nigeria to ensure that they have access to opportunities that can give them a level playing field in the society.

The System is addressing these priorities in diverse ways. For instance, the global Coca-Cola System, with its long history of refreshing lives, expanded its women empowerment ambitions in 2010 by rolling out an elaborate initiative called 5by20 programme, to empower 5 million women by 2020.

The goal was to provide women – both aspiring and thriving entrepreneurs – with opportunities to kickstart and manage their businesses through the linkage to its distribution system.

The system continues to enable more and more women every year to start up their own enterprises as distributors or retailers of Coca-Cola products.

These women entrepreneurs are then provided with the required support in the form of trade assets, business skills training, access to finance and mentoring to ensure that they can grow their businesses profitably to attain self-reliance and make positive contributions to their communities. In Nigeria, between 2015 to 2019, the program has successfully empowered over 38,000 women.

In what has been described as an ingenious approach to providing a head start to women, the Coca-Cola System also partnered with the Lady Mechanic Initiative to empower 100 vulnerable young women with vocational, entrepreneurial and life skills, and is currently the single largest corporate sponsor of this initiative.

Through the Lady Mechanic Initiative, women have been equipped to become certified professional automobile mechanics after a 3-year intensive classroom and garage training that covered automobile diagnosis, repairs, and maintenance, capped off with a 3-month internship with Peugeot Automobile Nigeria.

Also, in recognizing the lack of access to financial services by underprivileged women in Nigeria, the Coca-Cola system also recently partnered with the Lagos State Government Employment Trust Fund (LSETF) to train 1,000 women in Lagos state on financial literacy and communications skills.

Nigeria has one of the highest maternal mortality rates in the world, accounting for 10% of maternal deaths globally, according to UNICEF. The lack of access to affordable and quality healthcare for many women has combined to worsen the situation.

To support government in mitigating birth-related deaths in Nigeria, the Coca-Cola System launched the Safe Birth Initiative in 2018 as a strategic golden triangle partnership involving Coca-Cola, the Government (the Federal Ministry of Health and the Office of the Senior Special Assistant to the President on Sustainable Development Goals) and an NGO – Medshare International Inc. Its focus areas also include infrastructure development, equipment donations and manpower training. The initiative has impacted over 12,000 mothers and babies: 51,600 families and individuals as well as 500 health workers across 16 states of the federation and the FCT.

“Women have always formed a critical mass of our distribution chain, and we are happy to support this important segment of the population,” said Matthieu Seguin, Managing Director of the Nigerian Bottling Company (NBC).

“Women are important to our future growth because of the multiplier effect of their contributions to the society. Our plan is to continue to expand their growth in our value chain by creating more opportunities that allow them thrive.”

Across the globe, the role of women in building sustainable societies is gradually taking center-stage in policy roundtables, corporate boardrooms, public debates, and social forums.

As the rest of the world continues on the quest to transform the roles of women in the society by creating more gender-inclusive policies and enabling more opportunities for empowerment, the onus lies on the commitment of organisations, individuals, and the society at large, to combine efforts to break the numerous barriers holding women back.

This is not only crucial to building a thriving and balanced society but also represents one of the biggest accelerators of economic growth in the country.

The Coca-Cola System’s inclusive framework has shown us what is possible, and that we can begin to lay a firm foundation for Nigeria’s sustainable future by empowering women to find their own voices and become multipliers of economic opportunities. The time is now.