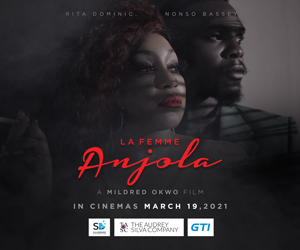 MCC Theater in collaboration with African Film Festival will present the North American premiere of “La femme Anjola“, directed by Mildred Okwo and written by Tunde Babalola. The event will take place at MCC Theater on Sunday, November 21 at 6 pm.

“La femme Anjola” (The Woman Anjola) is an African neo-noir crime thriller about a young Lagos Investment Banker whose life is turned upside down when he falls for a beautiful singer married to a wealthy gangster.

“As a filmmaker, I am drawn to telling stories that capture the essence of my observations and “La Femme Anjola” is one such film,” said director Mildred Okwo. “With this project, I have the opportunity to present a classic noir tale with a distinctively African twist; one that speaks for the times as it chronicles the journey of a young middle-class man who is simply a product of today’s Nigeria. In many ways, his story is the story of modern-day Nigeria.”

“La femme Anjola” stars Rita Dominic, Nonso Bassey, Mumbi Maina and Femi Jacobs and is produced by Mildred Okwo and Rita Dominic of The Audrey Silva Company, the producers of the acclaimed movie “The Meeting”.

This film screening will be presented in conversation with MCC’s current production of “Nollywood Dreams” by Burnt Umber Playwright-in-Residence Jocelyn Bioh and directed by Saheem Ali (Fires in The Mirror).

A Walk Tall Girl Productions, “Nollywood Dreams” began previews on October 21, opened on November 11, and has a limited run through November 28, 2021.

It’s the 1990s and in Lagos, Nigeria, the Nollywood film industry is exploding and taking the world by storm. Ayamma dreams of stardom while working at her parents’ travel agency
alongside her lovable and celebrity-obsessed sister Dede. When Ayamma lands an audition for a new film by Gbenga Ezie, Nigeria’s hottest director, she comes head-to-head with Gbenga’s former leading lady, Fayola.

Find out more at mcctheater.org.