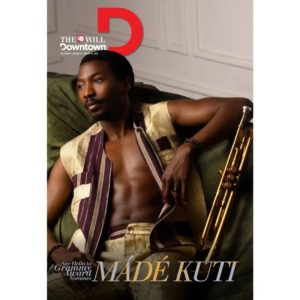 The weekly publication gets into a candid chat with Made about his musical journey that subconsciously started when he joined his dad’s band at age six, and what it meant growing up in the New Afrika Shrine. He also makes mention of what the future holds concerning his career trajectory and owning his craft, not as Fela’s grandson or Femi Kuti’s son, but as the multi-talented Grammy nominee.

It was enlightening because my dad made the shrine with a very clear purpose. It was supposed to be a space for liberal thoughts, so anybody that came in would feel like they have the freedom to express themselves and to think. All I understood as
a child was that a lot of people misunderstood what the place represented. I never really understood why because I did not have a greater understanding of journalism and media, and the kind of misconceptions that they have about the family. All I knew was that I watched my dad play four times a week every week, and three of those shows were free. The shrine was always full at the time—for each show, there was nothing less than 3,000 people in the shrine and across the street. Also, the area that we were in wasn’t as eventful then as it is now, so everyone that came there was coming to the shrine. 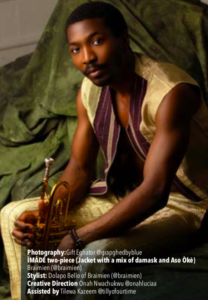 As a child, all I understood was that it was a lot of music and politics. People come from all over Nigeria, there are a lot of white people, and a lot of pictures of people that I didn’t recognize at the time. People like Malcolm X, Martin Luther King, Marcus Garvey, and so on. Because I didn’t recognize them, somewhere along the line, I started questioning the images that I was seeing, which is really what the shrine is. If you come there in search of enlightenment, you will find it; it is that kind of space. And because I researched to figure out who those people are, that then puts my person and identity on the kind of path that I now eventually choose to be on. If I didn’t know those people, what they did and represented, I probably wouldn’t be who I am today.

I was never rushing at first and I really wanted to finish my education at Trinity. But when I got those rejections at those conservatories, before I did my audition at Trinity, I started writing an album in the event that I didn’t get accepted in the university. So before Legacy+, I had already written an album with about 10 tracks and now it is somewhere in the archives. And when I finished with Trinity I had the space and time to write again. 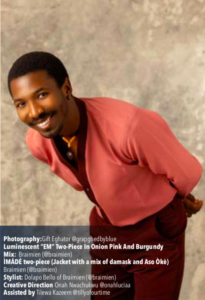 I went mad. We were on tour, on break in a tour bus in Belgium, we had two off-days. And I had been checking because I knew that the nominations were being announced that day so I was watching live. I was expecting that my dad would get a nod, but he put out a solo project, Stop The Hate, at the same time we released Legacy+, so I wasn’t sure which of the albums they would nominate. The nominations for Best Global Music Performance was announced first and it featured Pà Pá Pà, a song by my dad and I went mad. I was just happy that he was nominated because it is like they don’t want to recognize the effort and amount of musicianship that he puts in. Then the Global Music Album category came around and I had already thought that because they nominated my dad in the previous category, they wouldn’t nominate him in this one. I actually ran around the bus when Legacy+ was announced. Because the album didn’t get commercial success, it was nice to see that musicians respect it.

The full interview in the new issue is available here.