Obafemi Awolowo University Now Has a State-of-the-Art Music Studio, All Thanks to 2Baba 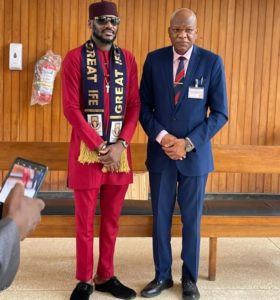 2Baba returned to Obafemi Awolowo University today for a very important cause.

Three years ago, the university’s Department of Music named him a Fellow of the School of Music, recognizing his accomplishments in the field of music. Now, the music legend has commissioned a music studio he built for the music department in Obafemi Awolowo University.

Members of the university’s administration and students were impressed by the state-of-the-art recording studio and joined in singing the school anthem with him. According to the Vice-Chancellor, Prof. Ogunbodede, the institution now has the greatest recording studio in Nigeria.

2Baba also announced on Instagram that the University of Benue would be the next stop for a music studio; “Sometime ago i was honoured by the Great OAU as i was inducted into the school of music as A Fellow Of The School of music. today i just commissioned the multimillion # studio i built for the music department in OAU ile-ife. upnext is Benue State University.”

Related Topics:2BabaMusicObafemi Awolowo University
Up Next

The UK is NOT Suspending Student, Work or Family Visa Application for Nigerians