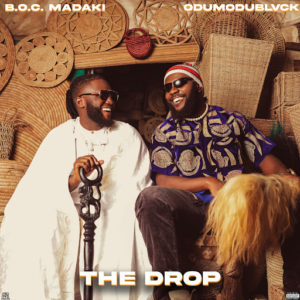 The 10-track album is a journey into a cross-dimensional world where separate elements coalesce to keep the listener tingling with excitement. For both artists, it’s an attempt at expanding their reach into different markets using drill music. It features various acts; Reeplay, Fatboy E, and more.

The album is centred on lifestyle, culture, and personal experiences. As the two artists work on refining their sound, they find a means to self-express through vibrant flows and assimilable lyrics. Each of the two artists does not depart from their original style while finding a middle ground in the unorthodox world of hip-hop. Naturally, they both share a predilection for their respective indigenous roots and this characterises the entire album. 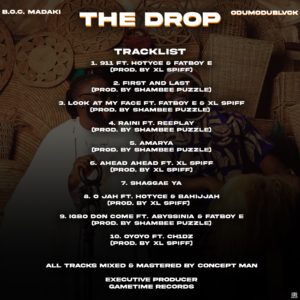 As one of the rising acts from the north, B.O.C. Madaki is at the intersection of Northern local music and what is considered mainstream in this part of the world. With this album, he takes a step higher from his last album, “Northy by Nature“. He is a brilliant rapper, and what makes his music distinct, especially on this album, is his vocal range. He sings and raps in his native tongue as well as in English. His collaborator, Odumodublvck, who is also a rapper, perfectly complements B.O.C. Madaki with his fierce style. Odumodu has featured on various projects this year, but for him, this album is a breath of fresh air. He taps into a different frequency and translates his experiences with gritty flows.

“The Drop” was produced by ShamBee Puzzle, XL Spiff and FK. All songs were mixed and mastered by Concept Man.