In a poor neighbourhood in South Africa, a mom-and-daughter team have found a way to keep many of their neighbours’ children away from crime and drugs: dance.

It’s 10 a.m. on a Saturday. A chilly winter wind is blowing over near-deserted streets in Claremont, a suburb of Randburg, near Johannesburg. The town’s residents seem to have taken refuge indoors, protected from the wind so bitter it has frozen the water in some of the neighbourhood pipes.

Occasionally, a lone, brave soul-in the latest case, pushing a trolley-enters the street to confront the grim reality of the residents’ everyday existence in a tough neighbourhood with a growing population, stalked by the menace of drugs and crime.

But save for that lone appearance, all seems quiet in the weather-beaten apartment blocks and houses with peeled backs, standing forlornly in long but broken rows.

So where is everybody?

The adults and children may be hidden in the houses, away from the unforgiving wind. At least the older children, the teenage boys, are probably out, with some huddled in a local park, at what some locals call “solace bases”.

Michelle Swarts walks down the empty street. She slows down and points to a group of boys sitting in the park.

“You see, those boys are wasting their lives due to drug use; you will find them here by the park smoking,” she says, her tone both angry and concerned. From the look on her face, there is also a deep sense of urgency.

“Teenagers are among the heavy drug users in our community,” the 44-year-old continued.

“You cannot walk in the streets of Claremont without meeting a horde of drunk teenagers,” she said, walking past another group of children, who were this time engaged in a game of football.

Growing up in this community, Swarts has witnessed many teenagers waste away their lives on drugs. According to her, almost every family in the neighbourhood has lost at least one member to drugs.

“It’s sad,” she added, her face cracking with emotion. 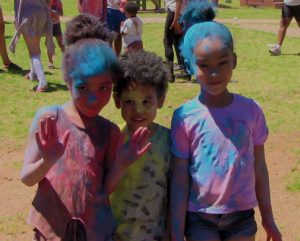 Swarts has offered many of these young people an alternative. Tired of seeing young people wasting their lives, she, with the help of her daughter, Nicolene, has created a dance group and christened it the “Xcel into Prominence Foundation”.

Swarts explained that “I figured out that young people would not be lured into social vices if they had some kind of hobby to engage in.”

“Since I enjoy music and dance, I thought it would be instrumental in keeping young people engaged.”

Arriving at the Swarts’ home entrance, one is immediately aware of loud music and excited noises emanating from the backyard. Swarts explained that for around 30 boys and girls who come here daily after school (including weekends and school holidays), this is a dance studio of sorts.

“Young people from this block are no longer idling in the streets. They come here for music, dance, and afternoon classes, “Swarts said as she led the way to the yard.

In spite of the chill, a group of young girls were practising well-choreographed dance moves as their peers cheered them on excitedly.

“Focus! Focus! You need to focus. This life is not a game. If you do not get it right, don’t give up; keep trying!” Nicolene Swarts instructed from the sidelines.

The “XP Foundation,” as it is known locally, opened its doors five years ago. Since then, the initiative has won the hearts of many residents, particularly parents.

One parent, who chose to remain anonymous, credited the group with keeping her children alive.

“l lost two brothers to drugs, and my neighbour’s child was gunned down a few weeks ago by drug lords, so this town is not safe for our children,” she said. 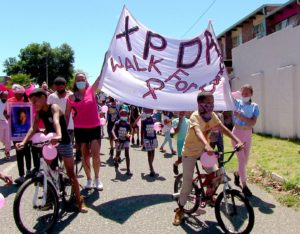 “l am happy for my two daughters now that they don’t roam around in the streets. When they are not at home, I know they are here dancing, which keeps them away from the peer pressure of drugs in this community, “she added.

In fact, of the 30 XP Foundation members, most are female. There are 28 girls and just two boys. With the majority aged between six and 15, they are often escorted to and from the Swarts’ home by Michelle.

The choice of music and the choreography are meant to send anti-drug messages to the kids and teach them about the dangers of drug abuse.

Daniel Norman, 22, a dancer and choreographer at the XP Foundation, said the foundation was steering young people in the right direction by helping them take charge of their lives.

“Our community is full of gangs and drugs. Here, these children not only learn how to dance but also get to know the dangers of drug use from an early age,” Norman said. The program also teaches the children about street smarts.

“Therefore, when they go to the streets, they know how to behave, “he explained.

During the dance sessions, Michelle and Nicolene also assist with schoolwork since the foundation also aims to help its members excel in academics. 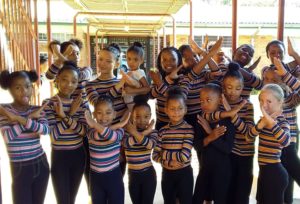 From performing at various functions at schools, churches, and dancing competitions, the foundation raises funds which are then used to contribute to school fees, as well as to provide food and basic necessities for some of the programme’s poorest members, while a cancer initiative encourages the young women in the group to go for breast cancer screening.

Their next big milestone: is to ensure the group is able to take part in a talent competition.

“It is remarkable how well the children have responded to the dance initiative. This backyard teems with life in the afternoons as they all stream in to dance and have fun,” Michelle said, watching intently as the dancers went through their paces yet again.

Oscars2022: Zendaya stole the Spotlight in Maison Valentino at the 94th Academy Awards

Oscars 2022: Chris Rock is Not Filing a Report against Will Smith for Now – LAPD