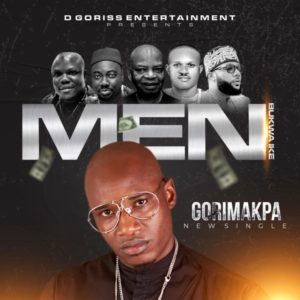 Gorimakpa, a rising talent in the Nigerian afrobeat scene, presents a distinct and passionate sound through his rhythmic and captivating vocal, titled “Men Bukwa Ike“.

Residing in Lagos Nigeria, the upcoming Afrobeats star was first introduced to his love for music at a young age by family and friends. Gorimakpa has since won awards with his previous hit songs like “My Music“, “Confirm“, “Shame On Them” and so on, which has gained him a lot of radio and tv plays across Africa. He has also gained popularity through his performance in some European nations like Switzerland, Greece etc.

In this song, Gorimakpa is heard passionately singing and rhyming catchy melodies about the rich lifestyles of affluent businessmen in Nigeria, a group that Gorimakpa, through his music, hopes to become a part of. We can confirm that he has delivered on this very track, so relax and judge his flows by yourself.

Nikki Laoye & Snatcha’s Wedding Photos Are Giving Us All The Feels ?