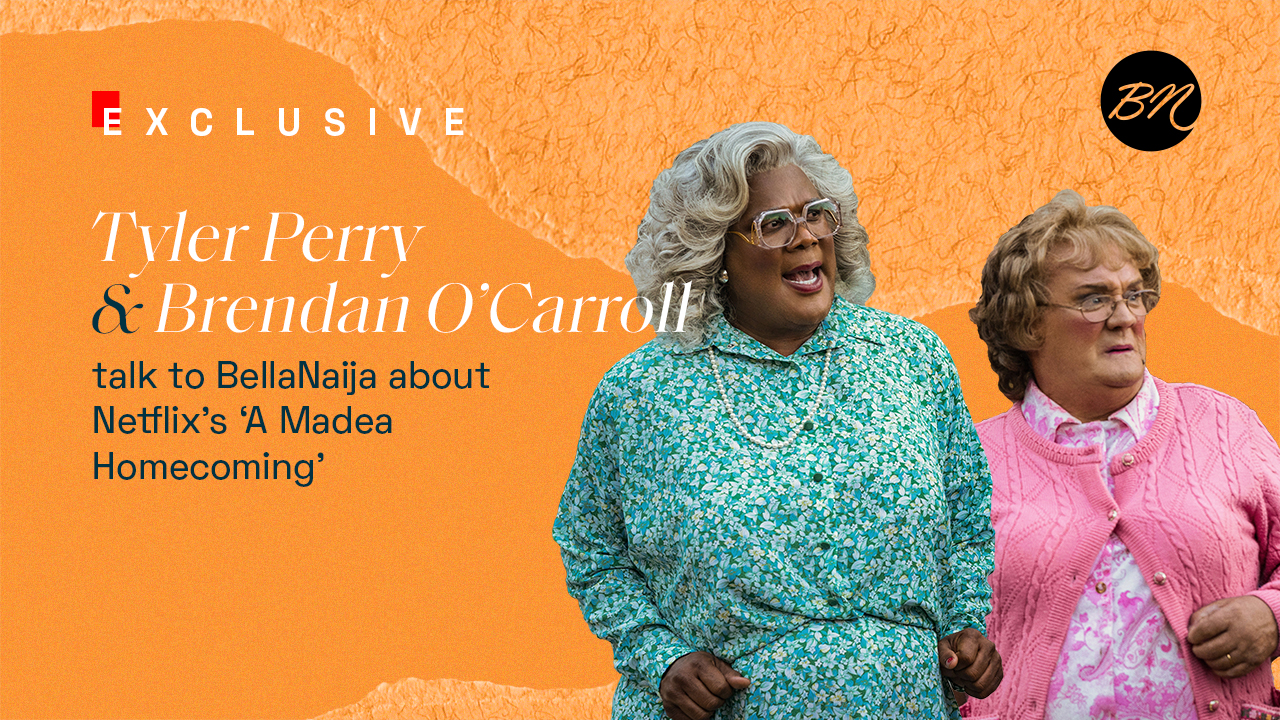 After over 15 years of playing Madea, from traveling plays to “A Mad Black Woman“, “Boo! A Madea Halloween“, “A Madea Family Reunion“, award-winning filmmaker Tyler Perry has wrapped up the character’s adventure with a final Netflix exclusive titled “A Madea Homecoming“.

To shed more light on the comedy movie which was released on the 25th of February, Tyler Perry and co-star Brendan O’Carroll talk to BellaNaija’s Lilian about the purpose of this film, the most challenging part of keeping their characters (Madea and Mrs. Brown) in sync over the years, the reason behind the movie’s plot idea, and a lot more.

The movie subtly and with comedy, addresses a lot of crucial topics, from racism, discrimination, cancel culture, and the Black Lives Matter Movement… Is it intentional that this is coming out in Black History month? What was the purpose of this film and what message were you passing?

Tyler Perry: I didn’t know when we were going to release it, but it started for me just to make people laugh because where we are in the country and around the world, it’s so much division, so much anger.

This pandemic, it’s all been very difficult. So I just wanted people to laugh. That’s the nucleus of it. That’s where it started. So to have it fall during Black History Month, I just want you to know I’m not responsible for that.

Brendan O’Carroll: I can’t really answer that as fully as Tyler did, because, for me, it’s all about the money.

You play similar characters (Madea and Mrs. Brown) in the movie effortlessly… For young filmmakers who want to know how to do this, What has been the most challenging part of keeping these characters in sync, and what have you learned from them?

Tyler Perry: I think it’s been pretty easy to keep them in sync because I know them very well. That’s my mother, that’s my aunt, that’s my uncles, that’s my cousins. I can always pull on their voices growing up and come up with some great stuff from just my own experience. But I think that what I would say to people who are trying to do this is just be sure this is something that you want to do and make sure you have a great team around you because I have a great team who helps me pull all of this together.

Brendan O’Carroll: I bet I experienced it firsthand for the first time in the making of this movie, and it is not easy. It is really, really difficult to go from Joe to Madea and to him saying to the other characters as well and playing to the kid that’s in school… It’s quite stunning

This is the final Madea film and everyone got together for homecoming. Why did you choose this plot to end and what makes this one different from the previous ones?

And Brendan has this incredible following all around the world. So I wanted these two worlds to collide so that people could see us in harmony and having fun and not taking things too seriously. So I’m hoping that it just speaks to the world, I really am.

Brendan O’Carroll: Yeah, it will. It will speak to the world because it’s got a great message of warmth and family. But more importantly of laughter, just to sit back… in your own sitting room and stream it and just laugh. And it’s nice to have that because we’ve had a really tough time and most people have had a tough time with lockdown and loneliness, social distancing.

Tyler Perry and Brendan O’Carroll also share with us the highlight of filming this production for them and why Madea had to recreate Beyoncé‘s “Homecoming” performances for the film’s outro. Get all the tea below: