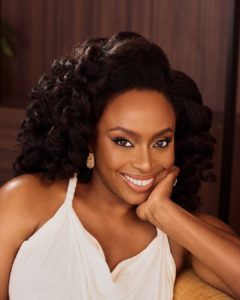 Titled “Mama’s Sleeping Scarf“, this is Chimamanda Ngozi Adichie‘s first picture book and it will be published by Harper Collins Children’s Books in the UK. It’s expected in 2023.

The rights were sold in a three-book agreement to Ann-Janine Murtagh, executive publisher, and Nick Lake, publisher of fiction and author brands, according to CNA’s agent Sarah Chalfant. Murtagh was happy that they had been able to acquire the book, and he lauded it for being a good book for kids.

Chimamanda Ngozi Adichie is one of the most important voices in literature today, and we feel honoured to publish her first children’s book on the HarperCollins list. Mama’s Sleeping Scarf is a tender and joyful exploration of family life. Exquisitely written with compelling simplicity, this is a heartfelt homage to family love. With beautiful illustrations from Joelle Avelino, it will be a picture book treasured across the generations.

The book is illustrated by the Congolese Angolan artist Joelle Avelino.

According to The Bookseller, the award-winning author wrote “Mama’s Sleeping Scarf” when her daughter was three years old, 2019. The story is “inspired by the Adichie family and portrays an ordinary day in Lagos, following a young girl called Chino as she plays with her mama’s scarf, spots her grandfather on his walk and winds down to go to sleep.”

For the first time, Chimamanda will publish under the pen name Nwa Grace James (translated as “the child of Grace James”) as a tribute to her mother. Early readers hailed the novel as “tender and joyful.”

Following the altercation between Will Smith and Chris Rock, David Oyelowo expresses his feelings and fears

Energy gAD & Host With the Most Do2dtun celebrates Birthday with ? Photos