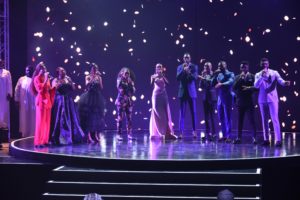 “Nigerian Idol” Sunday night eviction opened with a performance from all the contestants. They performed a cover of Cynthia Erivo’s “Stand Up” to keep up with the night’s inspirational theme. Backed by the gospel choir 121 Selah, the contestants elevated the song with their sonorous voices and moving performances. It was indeed the best way to start the show, and they wowed everyone.

IK Osakioduwa, “Nigerian Idol” host, revealed that the top 10 received a record-breaking 14 million votes from the viewers. He then called the top nine contestants with the most votes in no particular order to perform their inspirational hit songs.

Jordan was the first contestant to seal his spot on the exclusive list. The Kaduna born and raised singer dedicated his emotional cover of Lauren Daigle’s “You Say” to the victims of the recent crises in the state. Progress came up next to perform his version of “Uncle Suru” by Jon Ogah, which he delivered with a twist. He added some of his dreams to the song, inspired by its hopeful spirit.

Itohan, aka Baby Dragon, treated the judges and audience to Mary Mary’s “Can’t Give Up Now“. The judges noted that her vocals did the song justice. Abigail also received very high praises from the judges for her rendition of Whitney Houston and Kygo’s “Higher Love“. Obi Asika said that she delivered one of the best performances of the song from the iconic pop singer.

Zadok’s performance of Timi Dakolo’s “Wish Me Well” reflected the audience’s thoughts towards him as their votes helped him seal the fifth spot on the list. As always, he sang beautifully and delivered well.

For David Operah, who lost his father at a young age, it was an emotional moment to perform a cover of the song “Dance With My Father” by another iconic singer, Luther Vandross, but he blazed through. In contrast to David’s moment, Debby was happy for several reasons, including getting another week in the competition, and it shone in her cover of Pharrell’s “Happy“. It also reflected the judges’ reactions to her performance.

It was a relieving moment for Faith as IK called her to the stage to perform “Next To Me” by Emeli Sande. Banty’s fantastic rendition of Michael Bolton’s “Lean On Me” was the night’s last performance. The inspirational song seemed apt to round up the show as she, like the other contestants, leaned on the audience’s vote to make it to the top nine list.

Sadly, with Banty’s securing a space in the top 9, it meant Gerald’s performance in the opening act would be his last time on the “Nigerian Idol” season 7 stage as his journey in the competition came to an end.

Another round of voting on Nigerian Idol season 7 is on and who stays and leaves is solely in the hands of the viewers. Voting is open now and will close at 9 pm on Thursday, 7 April 2022. Viewers can vote via the mobile site and website. Viewers can also vote on the MyDStv and MyGOtv apps available for download on the Google and App stores.

M.I Abaga & Eniola Mafe are Giving us all the Feels With their Pre-wedding Shoot!

Gbemi & Toolz Are Back with Season 5 of the “OffAir Show”