ON THE SCENE: ASA 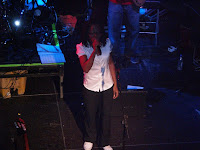 Since the release of her eponymous debut album, Asa (meaning – hawk) has been tipped to become an unstoppable juggernaut.
Being hailed by most of the British press as the proprietor of “Afro-Folk” music, her originality has gathered more spins on the airwaves and now her new single ‘Jailer’ is set to bring her to the forefront. But as we all know, for the artist, its all about the live performance.
Home to great rock bands and stellar musical performances, the Carling Academy in Islington hosted Asa’s first London gig on Monday the 12th of May and I was there to hone in on all the excitement. I even sneaked in a little chat with her back stage before the gig.

Ok.. So I cant help it but I have to say its only natural that we had a two hour intermission 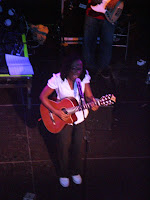 before we could be graced by the voice of Ms Asa herself (African time never goes amiss).
The band was on top form and she opened the gig from behind the stage with “360 degrees” and there was no doubt that everyone at the Academy was a complete Asa fanatic. They went berserk once she appeared on stage and oh yes there were the resounding echoes to “Bibanke”. She managed to tame the crowd with a bit of freestyle and jiving. She even gave us a hint of vocal gymnastics every now and again. We were able to hear her really perform on “No One Knows Tomorrow” accompanied by a samba laced beat and equally amazing percussion. Asa serenaded us with an acoustic set for the track “Subway” and the forever captivating “Beautiful”. 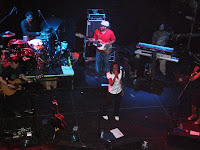 I remember seeing a girl crying hysterically to ‘Beautiful’, who knew that Asa had the power to tickle the tear glands.
In my opinion, her voice and music really shines through in these acoustic and semi-acoustic arrangements. It didn’t take long for the karaoke house to come alive to the singles “Jailer” and “Fire on the Mountain”. I was still a little bombed by the fact that I didn’t get to hear my favourite track on the album “Iba”.
She reintroduced the band back on stage for the track ‘Awe’ creating a stand-up meets ‘Tales By Moonlight’ atmosphere (don’t pretend you dint used to watch tales by moonlight when you were a youngin).
During the performance, she enchanted and mesmerised the crowd with the vocal repetition on the lyric “O bi mo” and left me with that all so familiar shiver down the spine.
She danced her way through the instrumentals letting the band shine through in their entire element. Who knew that Asa was such a hot stepper with an incredible sense of humour on the stage. It was also great to see her invite some audience members to enjoy the spotlight with her, Tamilore Kuboye did an amazing job when she was put on the spot and called up stage to sing briefly.
Watching Asa perform was really what jam sessions were about, Interacting with the crowd, entertaining and just rocking out with musicians on stage.

When I caught up with her back stage, I had to ask about the record label controversy in Nigeria 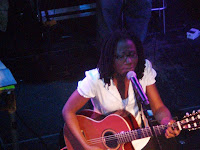 before she moved to France. The thing is that she takes a more philosophical perspective to these things these days. She claims that she has no resentment towards them these days and since she got to record the album the proper way, the most important thing is that she is free. On the subject of defining her music, Asa says “I see my music as soul music and this is because I sing from my heart and soul and that is where it all comes from”.
Well before the gig she told us that we would leave fulfilled and we definitely were.
Check out Asa’s latest vid below, ‘Jailer’
ASA music video ‘Jailer’
Uploaded by naiverecords
That’s it for today!
Your feelings on Asa?
Related Topics:
Up Next